Here Are The 7 Most Valuable Matchbox Cars 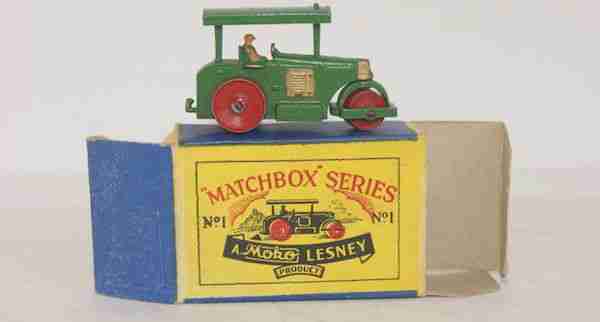 This is by far the cheapest car on our list, but it’s still worth a fair bit of money. When Lesney began producing Matchbox cars, there had to be a first. The Road Roller was created as a larger vehicle, but it was scaled down so it would be friendly for kids to take to school — more on that later. For now, what you need to know is that this was the first ever 1:64 scale Matchbox car ever produced. There are two versions, one with an extended roof and one with a short roof. But despite it being the first, is it really one of the most valuable Matchbox cars ever?

The longer roof Road Roller is the more valuable of the two editions (and the older). There is some good news! It’s not too hard to find one in played with condition. But that just makes it collectible for the legacy — not value. However, finding one with its box is rarer to find in good condition. If you want this piece of matchbox history — and the car that started 1:64 scale die-cast cars as a whole — in mint condition, expect to pay around $100. If you’re interested in the shorter roof version, it tends to run about $50 for mint. While there are cars that are more valuable monetarily — in this case the legacy outweighs the dollar signs.

Much like many of the items on our list, this isn’t the average model. This car was sold predominantly in two colors, white and blue. For the basic versions, there isn’t too much of a difference in cost. Most models will make you only about $30, which isn’t really anything to write home about. The one we’re talking about had one main difference from the average blue Fairlane Police Car.

See, the Ford Fairlane in question had a rare feature. Some models had gray wheels. While the slight difference is minor to non-collectors, it makes all the difference to avid fans. The gray wheeled version is so rare that one recently sold in mint condition with its box for just over $1,200 on eBay.

So this one is one of those weird areas that there isn’t as much information as we’d like. We do know that the Mercedes Benz 230 SL was issued in three colors: white, white (Superfast), and yellow (Superfast). We don’t know where the green falls into this. However, the valuable version is sold in Apple Green and was from 1967. And while the original run of cars was from 1966 to 1968, that color is not on our list of released vehicles. Even worse, there is almost no information anywhere about what makes this car so valuable.

What we do know is that it very, very rarely appears in the wild. The last sale we can confirm was in 1999, more than 20 years ago. This little die-cast treasure sold for an astonishing $6,765 — that’s more than $10,000 today if you account for inflation. The thing is, we can’t find a successful sale since, or any information on the rare color choice. The best we can guess is that it was a pre-production model that was never released to the public. 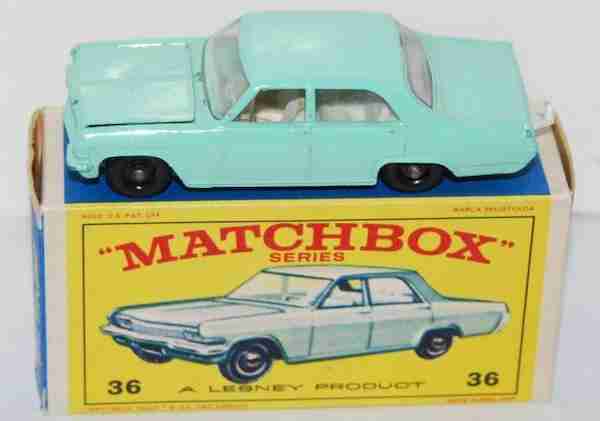 The Opel Diplomat in “Sea Green” is considered by many Matchbox collectors as “grail worthy.” We don’t throw around the term grail lightly, but this car is actually that — in fact, most things on this list are. Finding the Opel Diplomat isn’t that hard if you’re looking for the more common Metallic Gold version. Most collectors already have that one, though, as it won’t run you all that much on a second-hand site.

The Sea Green version is a different story. It was initially sold in the earliest transporter set — and you might expect the collection to sell for an even more substantial amount. But most other cars within don’t come close to the Sea Green Opel Diplomat in price. If you want one, this rare turquoise car has been valued at around $9,000! 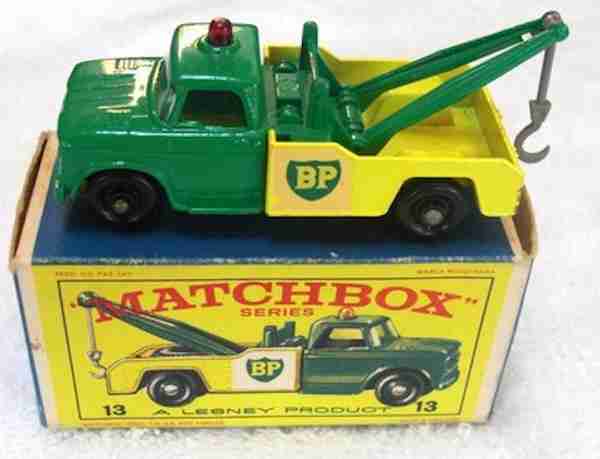 When it comes to collecting, one of the coolest things to find is a factory error. Sometimes printing the card the wrong color is all it takes to drive up the value. But in the case of the BP Dodge Wrecker, well, they released it in the wrong color. Most of these trucks were yellow with a green bed, but the version that is worth the big bucks was reversed!

The green versions also had a silver sprayed grill and headlights — later versions did not. If you keep these things in mind, you should be able to spot a fake. If you find a real one, get ready for the price tag. These rare reverse color BP Dodge Wreckers are known to sell for a lot. In 2005, a mint in box, reverse color wrecker sold for $9,500.

This crane isn’t always a valuable collection piece. In fact, most versions of it sell for about the price of a nice dinner. However, one variant is worth its weight in gold. See, most Magirus Deutz Cranes were silver with an orange crane arm. There were minor model changes from rivets to wheel size, but overall — they are pretty much identical. That is, except for the pre-production models. The pre-production models were light brown and had either a red or orange crane arm, and there aren’t many of them. They are rare enough that it’s unlikely you’re going to find one in your collection — but it’s not entirely impossible.

The brown Magirus Deutz Crane is one of the most valuable Matchbox cars ever made. In fact, this car is so valuable it made our top 10 most valuable die-cast Car list! It is also the most valuable 1:64 scale Matchbox on our list. If you want to add this rare car to your collection, we hope you’ve been saving. Onesold in 2004 for $13,000. 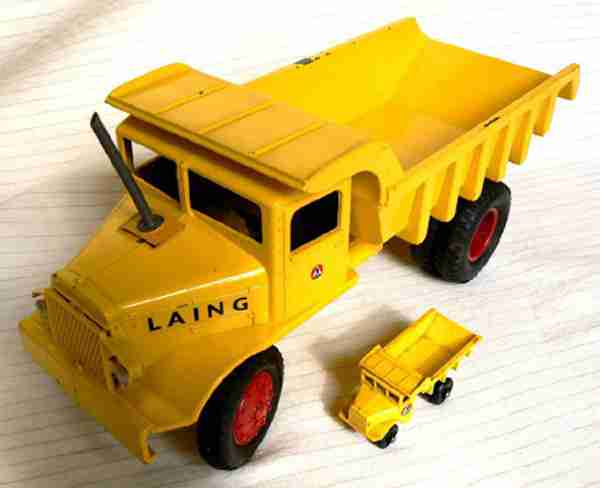 Now, this right here is the rarest Matchbox car ever to exist. It requires another little history lesson to provide context as to why it made the list. This truck isn’t in 1/64 scale. It’s a lot bigger. While most Matchbox cars are about 2″ in length, this large truck was about 11″ long. When Lesney was starting out, they originally planned to make larger toy cars to sell in London for Christmas. However, Leslie and Rodney Smith (they merged their names for Lesney), hired on a man named Jack O’Dell. He wanted to make a school-friendly toy for his daughter — and designed a version of the popular Lesney Road Roller that fit inside a matchbox. The Chief Model Maker, Ken Wetton, made 8 prototype proof of concept models. Sadly, the line never got off the ground, and most of those prototypes disappeared.

A single Ken Wetton Major Scale Quarry Truck was tucked away by Lesney as a piece of their history. This truck is one of the only remaining works of Ken Wetton, to top it all off. We thought it would remain as a company treasure forever. That is, until out of nowhere the Matchbox community got wind it was sold to a Japanese collector by the name of Takuyo Yoshise. We don’t know what he spent, but we do know that in 2010, he sold it. This one of a kind treasure went for a staggering $15,000 at auction! That makes it the most valuable Matchbox car ever produced — even if it’s not in scale.

i am just wondering if this set has any value?

Sorry, not the ones I can see.  The BP Wrecker maybe $5, the others all much less.  The two chromes HWs might be better but that is hard to tell on those photos.

Joschik, be so kind and tell me if any of the cars in my collection is valuable?

Sure, add some photos!

My collection is not very big, but maybe some enthusiast would like some part of it.

Not sure what happened but there are no photos uploaded?

Those photo uploads did not work.

You are missing the cream Mercury Cougar (believed to have mostly been sold in South Africa). That sells for up to about $5,000.

Are you aware of anyone I can send pics to to see what we have? Thanks

Hi Susan, you can just post them here! Some of our members can tell you everything you ever wanted to know about them!

Do you know anything about this car

Sure, it’s a nice model of the Matchbox Regular Wheels Lotus Racing Car from 1966. Worth about $8 in that condition.

Yes, this is part of a transporter called “matchbox Major Pack” number M-6

I have a Speed Kings K-58 Corvette & Power Boat Pack, I am only able to find this listed with a Blue Corvette, mine has a Red Corvette! I am wondering if you know the value?

Got a photo of it?

Here is my photo!

Very nice! Would you like to join the Squad and add that to the database for us? Once we get it in the database we can start tracking the value.

What must I do to join?

I did join yesterday! Thank you!

If genuine a lot. They sell rarely and one of our Curators estimated it at $9,000. I think it would be a little less than that but not bad! https://www.hobbydb.com/marketplaces/hobbydb/catalog_items/dodge-wreck-truck-b8ab398a-8ece-46d9-be2e-bc618d3761dc

I have a few old matchbox cars

Now we want to know what… please add some photos!

There are not many, I have also been working on fixing and repainting them

They have been played with, so some money value would have been lost, I want to know how much the rolls royce silver cloud would be worth

but idk their vaule right now though

Photos are worth 1,000 words… Hard to tell anything without them.

ok i will try to get them a picture

i got a picture of one of the hot wheels i have, this is the Ferrari 350p

Sorry, but in that condition, it is worth almost nothing. It does not have the engine hood that would have some value and there are no other parts and it is hard to restore it without the hood.

Any idea what this is and what it may be worth? Very old looking. Unbranded. Bottom reads ‘LICENSED UNDER PATENT 1334539’ and ‘MADE IN U.S.A.’.

Sorry, really needs a photo to be able to comment.

Those beat me but just a question of time for somebody else to see and recognize it.

I also recently came across these die-cast airplanes. Know anything about them/if they hold any value?

The Wings and Air Commands re repackaged Zee Toys (see an example here https://www.hobbydb.com/marketplaces/hobbydb/catalog_items/sikorsky-s-55/subvariants) and Planes of the Wold is an ERTL series. You should find most of these on hobbyDB (and feel to add the others!).

Hate to disappoint but they are worth very little. Maybe the red Auburns (depends on their wheels) are a little better. You can find all of these in our database (they have names on the baseplate that you can search for).

I have a matchbox best of British 2006 number one orange lotus Elise in a sealed package. Never opened. But it has an orange pick up truck with the Elise box. A factory error. Is it worth anything.

And these are from the early 80’s. Again wondering if they have any value. Thanks!

Sorry, Pia, not much of value. You also got some Hot Wheels and they are slightly better (unless I missed something, others might add something).