12 Superhero Toys That Are Super Hard To Explain

Superheroes have long been one of the most popular subjects for toys and collectibles, and why not? With a couple of action figures and a lot of imagination, anything is possible. Unfortunately, not everything that’s possible makes sense. Here are some of our, uhhh, favorite head-scratching superhero toys. If you have logical explanations for any of them, let us know in the comments! 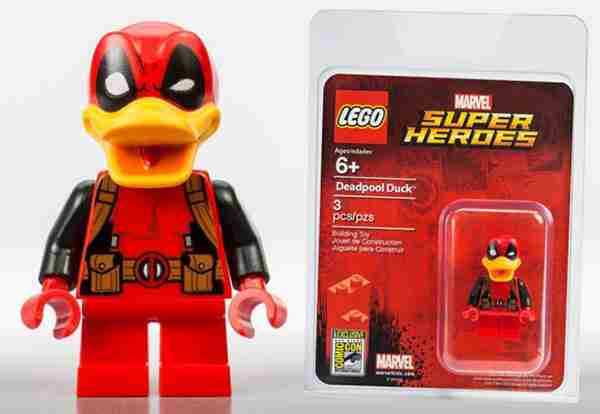 Deadpool the Duck – Is he a duck who thinks he’s Deadpool, or a Deadpool who thinks he’s a duck? Lego made an exclusive Duckpool (Deadduck?) minifig for the 2017 San Diego Comic Con, and he has since taken on other forms such as Funko Pops figures. Duckpool. This is really confusing, actually. Just accept it and move on.

Rocket Raccoon vs. Mega Man Figures – Are they friends? Enemies? Frenemies? And what are they doing together since they’re from completely different copyrighted worlds? Well, there’s a new Marvel vs. Capcom video game, which is an extension of the arcade game that dates back to 1996. And the logical reason for that original mashup was, geez… like we said, hard-to-explain. The ‘90s were weirder than you remember. 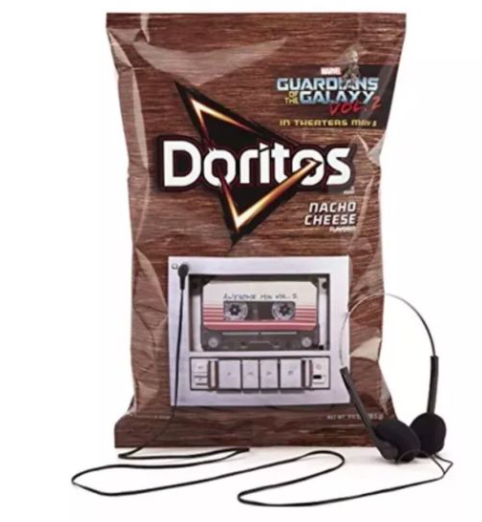 Guardians of the Galaxy Doritos Bag With Built-in Walkman – Speaking of Rocket and friends, here’s a strange collectible. Few movies use their soundtracks as effectively as the Guardians movies, so it makes sense to offer an old-school cassette player filled with Star-Lord’s greatest hits. It even has lo-fi looking 1980s style headphones attached! Why it comes mounted in a bag of Doritos is anyone’s guess. Still, you know you want one. 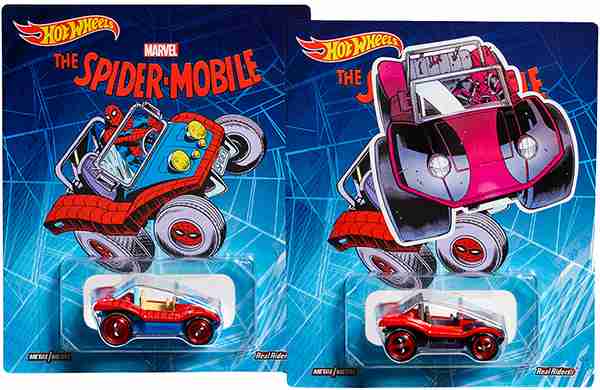 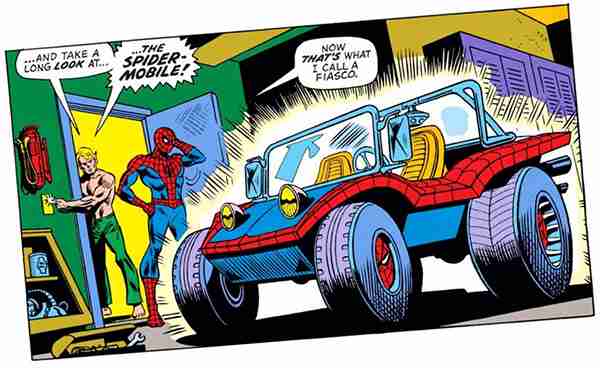 Everyone hates the Spider-Mobile. Fans, artists, writers, Spidey himself…

Spider-Mobile/Dead Buggy – As we all know, Spider-Man gets around town pretty easily by slinging webs and swinging from building to building. And sometimes he takes the subway if needed. So what’s with the Spider-Mobile? It’s a dune buggy, which is cool, but doesn’t make a lot of sense in a major metropolitan area with no beach. It is canonical, having made several appearances in comic books, but always as the subject of ridicule. The joke came full circle when Hot Wheels made a must-have San Diego Comic Con exclusive model of it. Then things got even more meta when it was discovered that there was a chase version… If you were lucky, you might have opened the box to discover the Dead Buggy, “vandalized” by Deadpool. 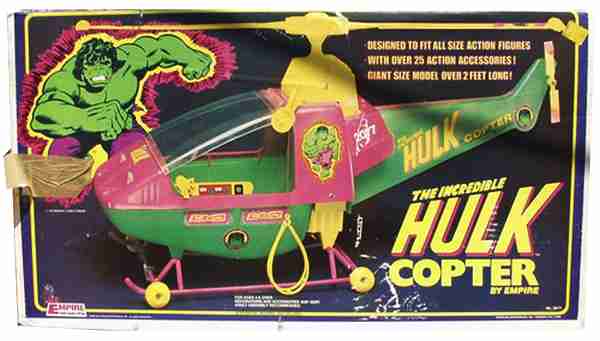 Hulk Copter – Hulk smash. Hulk throw things. Hulk struggle with socially acceptable motor control. So Hulk not good candidate for piloting helicopter. Or any vehicle, for that matter. But especially a helicopter. 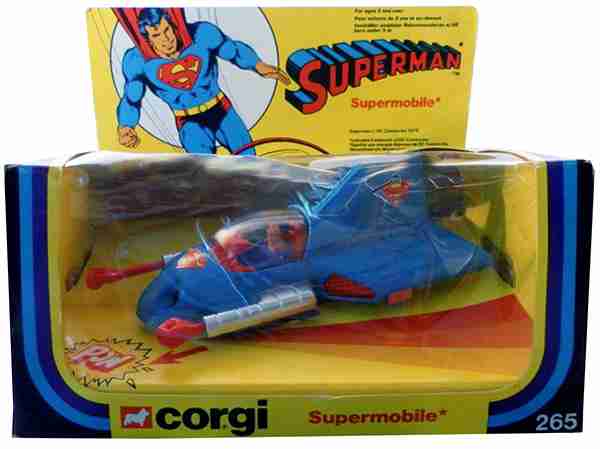 Supermobile – If you’re faster than a speeding bullet and able to leap tall buildings in a single bound, you don’t need a flying rocket car. Even if it has punching fists in side-mounted cannons. Even if it did actually appear in the comic books. In the time it takes to valet park that thing in Metropolis, Superman could be on the scene of any developing situation. And if he does need a ride, Batman probably owes him a favor, so he can call him. Nonetheless, Corgi made a model of it, a few different variants in fact. And there are some other neat toys if you search for “Superman plane” on hobbyDB. 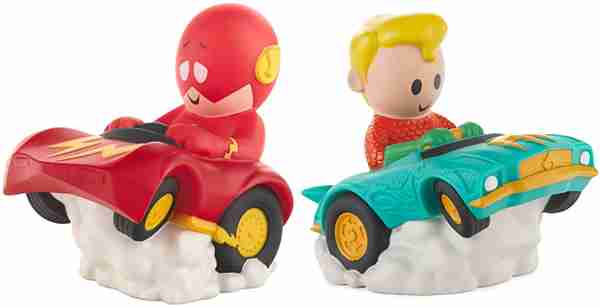 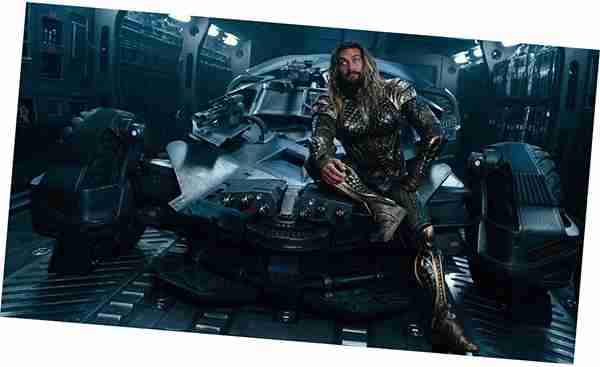 Aquaman waits for a ride in the Batmobile in “Justice League.”

Aquaman and Flash Cars – Not to keep harping on vehicles that have no reason to exist, but Aquaman doesn’t drive. At least he never seems to in the comics. Like Superman, he can hitch a ride in the Batmobile as needed. In fact, it appears that he does exactly that in the “Justice League” movie. As for Flash, he’s faster than any car will ever be, so the only time he might need one is if he goes to Costco on the weekend. And if he did shop in bulk, he probably would choose something more practical than a Corvette. They are adorable, though. These are part of the Squeely series of vinyl figures from Hallmark, so you can probably expect to see them in ornament form soon. 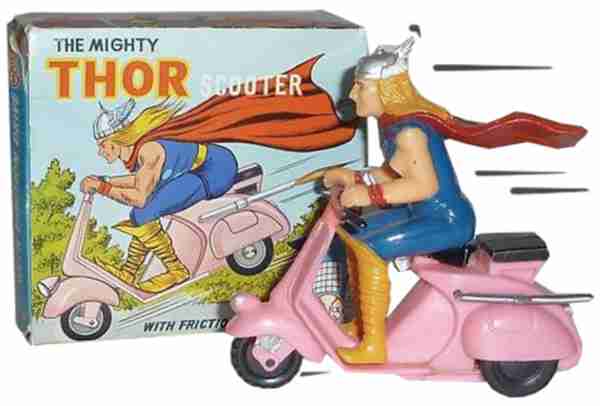 Thor Scooter – It’s The Mighty Thor. Riding a Vespa. A pink Vespa. This is non-canonical. This should not exist. The basis for this scooter is the Skiddo Scooter from Marx Toys, featuring a really scary looking Army soldier. Seriously, the other version is really weird looking! 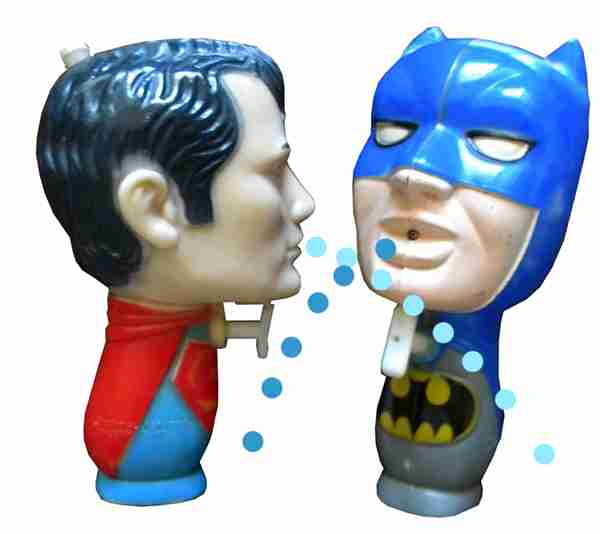 Batman and Superman Squirt Guns – These are kind of strange… why would these guys go around spitting water on people? That’s really more of an Aquaman thing. But, hey, whatever. You could design a worse toy. Much, much worse… 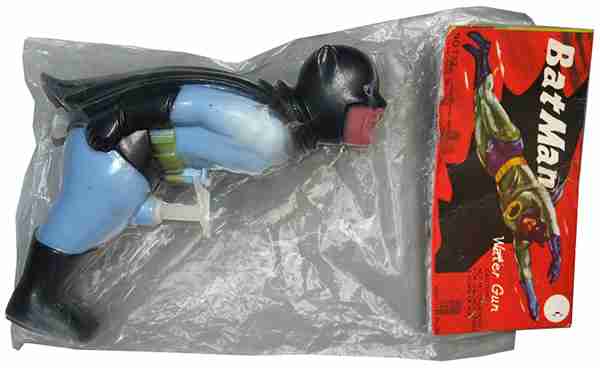 Another Batman Squirt Gun – No. NO! A THOUSAND TIMES, NO! This squirt gun is just wrong on so many levels, it’s impossible to count! In case you’re wondering, this does not appear to be an officially licensed toy (Need proof? The miscapitalization of “BatMan” on the label, the fact that he’s flying like Superman on that label, the fact that there is no way someone at DC would be dumb enough to authorize this… would they?) Amazingly enough, there was a similar Popeye version as well.

Got any other oddball superhero toys that we didn’t mention? Hit us up in the comments and add them to our database!

Sooo, do you own all of these?

I own a few of them, and had at least one of the water pistols as a kid. Not saying which one, though…

Try getting one of this “Sense of Right” Packs… what every kid wants! a Lightning McQueen, a power ranger, shrek and the super friends… perfect sense for a toy pack…