A while ago, we shared a list of unusual Model Car Brands with strange histories. The response we got was terrific, so we did another list. Since then, we’ve dug up enough other odd brands to compile yet another batch of model and toy cars you may have forgotten (if you ever heard of them at all.) All in all, this round of models comes from seven different countries if you’re counting!

No, that’s not a typo, it’s just clunky translation. This company started as “Dream Become True”, possibly playing off Chinese auto company Build Your Dream. They then changed it to “Dream Becomes True” which is still kinda clunky. Their main offerings are Model Cars in 1/32 and 1/24 scale, which are fairly detailed and include working parts as well as lights and sounds.They also make some pretty basic models of mostly high end exotic cars in 1/64, including about the only model of the Koenigsegg CCX available and, even if the doors don’t open correctly.

Simple, inexpensive toys molded in color… what could go wrong? The sheer coincidence of the name unfortunately became a headache for the company, (parental objections, etc.) so they didn’t produce many models under this brand. And well, when you try to do a search online for them, well, just make sure you keep “safe search” turned on. Even better, look for them on hobbyDB instead.

Quiralu models were made in France in the 1950s and ’60s and included several microcars. The company and their models went into hibernation for many years until the original molds were resurrected in the late ’90s. They were used again to make a limited number of models with the same body castings but slightly different tinplate base and window glazing. The colors for each generation are often loud and fun.

The name Radon probably doesn’t have any strange connotations in Russian like it does in other parts of the world. These cars are cold war relics, from a Russian state factory. They are mostly 1:43 scale diecast Soviet vehicles, including marques that aren’t likely to be reproduced in any other country. As a bonus, they do a lot of limos and other service vehicles, which are always neat to look at.

This Portugal based company is best known for their models of 1930s American cars. Detail is simple, but the cars sometimes come with well-known passengers… You can get the Cadillac V16 Convertible with President Franklin D. Roosevelt riding in the back, or, if you prefer, Italian actress Cicciolina. But not together, even though that would be really awesome!

They Farbwechsel when they Temperaturwechsel! Simba, despite the very elephantine name, was a German company that made mostly models of German marques. Their color change cars were revolutionary at the time, as they were among the first where the color depended on the temperature of the water. 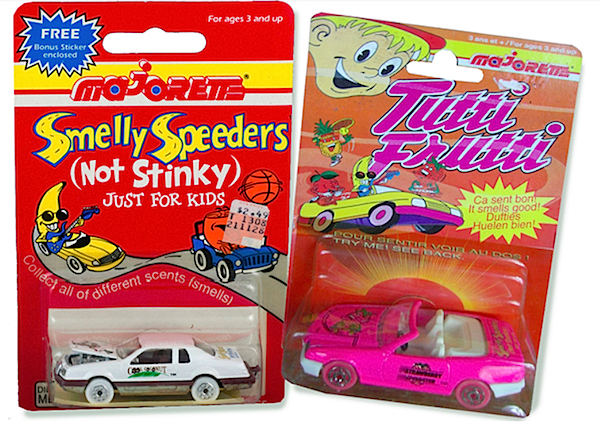 Sure, these look like standard Majorette models. Except they have some odd color combinations, especially the brightly colored tires. And when you open them, well, the reason for the name becomes obvious. Each car was scented in generally favorable aromas such as coconut or strawberry, not unlike those emanating from your car air freshener. Unfortunately, if you find one in the package, there’s a good chance the scent has worn off over the decades. 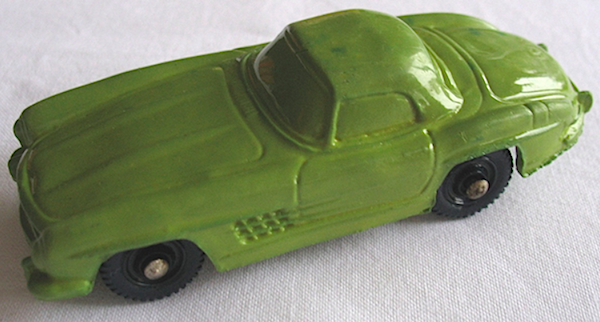 Starting in the 1940s, this company produced primarily models of German cars but also one of an American military Jeep. Bodies were made of a single piece of rubbery plastic in a single color (some look kind of swirly) with a separate clear windshield in some cases. Details were crude at best. Later models mostly eschewed the clear parts for solid molded windows. Based on their Datsun 240Z model, it’s safe to say they were still making these at least into the early 1970s.

Starmada is fairly new to the model car business, debuting at the International Toy Fair in Nuremberg in 2009. They offer mostly European marques with a heavy emphasis on Mercedes-Benz. These are sold under the name Brekina in many countries. Two really neat things about them… they make a lot of odd body styles such as limousines and hearses. And if you can believe it from the photos, these cars are 1/87 scale, some of the most detailed cars you can get for an HO railroad.

Victory Industrial Products or VIP was a small company that began its life during the second world war in a boat house which stood directly alongside Kingston Bridge in Hampton Wick near London. It was founded by two men, Captain William John Warren and Gerald Fenner Burgoyne who set up the company to manufacture small electrical components for the Ministry of Supply. Not quite nanotechnology, but the components were useful for making model trains, 1:20 plastic models and 1:32 slot cars. They were mostly odd, utilitarian cars, but charming in a huge way.

Do you have any favorite odd brands we haven’t covered in these articles yet? Let us know in the comments!

Another great mix of old and new stuff.   Some are well-known in France (Quiralu), or in the UK (Victory), or by 1/43 American car collectors (Rextoys)!  I’ve even heard of Radon … But others are even more strange!  A Gay bus with no front window??  Thanks for the review  🙂

Thanks! We’ll do another roundup sometime in the next few weeks, so stay tuned!

Those Simba models are actually by May Cheong a.k.a. MC Toy a.k.a. Maisto, and the color changing process was a copy of what Matchbox had introduced a short while before.

Simba was a distributor rather than manufacturer, putting its name on various far-east manufacturers’ products for sale in Germany and elsewhere in Europe. The name was derived from the company founder’s last name Sieber (not to be confused with Sieper of Siku fame). Eventually this company formed the basis of what is now the huge Simba-Dickie group, owner of the Märklin, Schuco and Majorette brands among many others.