Cheers to the Bus Driver, Especially These 10 Fictional Ones!

My car has been in the shop all week getting expensive performance upgrades… *sigh*… I wish. Actually, the shop is waiting on one little but significant part to finish a boring maintenance-type job. But I guess brakes are important on a car, right?

As a result I’ve been taking the bus all week. There’s one from my neighborhood to right in front of hobbyDB headquarters, so it’s not a bad way to go. Of course, it does take a bit longer than driving, but I don’t have to watch the road, plus the bus service in Boulder has Wi-Fi. So in the interest of being efficient while commuting, I started working on a list of fictional bus drivers, mostly with collectible connections.

So, Cheers to the Bus Driver !

Otto Mann, The Simpsons
“My name is Ot-to, I like to get Blot-to!” As questionable as his driving (and other) skills may be, Otto has been piloting the Springfield Elementary school bus for almost 30 years, so he must be pretty good at it. Or else the Springfield School District is really desperate. Either way, he starred his own comic book, “The Gnarly Adventures of BusMan.”

Veronica Crabtree, South Park
Speaking of long-tenured cartoon bus drivers, did you know the ill-tempered lady with a bird on her head on South Park had a name? Now you do. Sadly, a couple seasons ago, she and her bird were found dead (“I know she wasn’t in any recent episodes, but dammit, she didn’t deserve this!”) and has been replaced by Jose Venezuela.

Ed Crankshaft, Crankshaft
Neither of the previous cartoon drivers can hold a candle to Ed Crankshaft of Tom Batuik’s comic strip, who’s been backing up over mailboxes since 1987. So he must be like, 122 years old by now. A longtime Cleveland Indians and Toledo Mud Hens fan, the character was honored as a giveaway bobblehead by the Hens in 2016.

Ms. Valerie Frizzle, Magic School Bus
Another cartoon bus driver, but one of the few who’s actually careful and considerate. And since her bus can fly and go under water, she shows dazzling busmanship. All this while imparting important life lessons to the kids onboard.

The Bus Driver, Don’t Let The Pigeon Drive The Bus!
The Pigeon, Don’t Let The Pigeon Drive The Bus!
Never mind that it seems awfully irresponsible of The Bus Driver to ask a child to watch his vehicle to prevent a very persuasive bird from taking the wheel. This children’s book by Mo Willems rivals The Monster at the End of this Book for enjoyable yelling and flailing while reading. Spoiler alert: The Pigeon does not, in fact, get to drive, but he did get his own stuffy toy.

Ralph Kramden, to the moon!

CatBus, My Neighbor Totoro
As an anthropomoprhic anime bus/cat hybrid creature, we’re not really sure if CatBus has a driver, or is the driver. Either way, all hail CatBus!

Ralph Kramden, The Honeymooners
Fun Fact: While you frequently see Jackie Gleason’s character in his bus driver uniform on The Honeymooners, they never once showed him actually driving a bus. Kinda makes you wonder what he was really up to all that time. Maybe he was a detective or something off screen.

Annie Porter, Speed
Speaking of detectives on buses, Keanu Reeves’ character also does not, in fact, drive the bus in Speed. Annie Porter, played by Sandra Bullock, spends much of the film behind the wheel, driving fast, causing havoc and winning our hearts. Reeves and the bus do not appear with Bullock in the dreadful sequel Speed 2: Cruise Control. Ms. Bullock’s career managed to survive that wreck, however.

Ben Shockley, The Gauntlet
Long before Speed, Clint Eastwood drove a bus very slowly down the streets of L.A. in this movie to deliver a key witness to an important trial. Since it was made around the same time as some of his other films, many people mistakenly think this was a “Dirty Harry” movie. 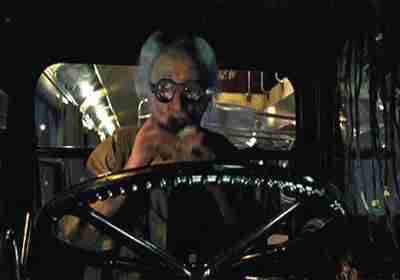 Ernest Prang, Harry Potter franchise
On the topic of movies about someone named Harry, Ernest Prang drove the purple triple decker Knight Bus in the Harry Potter novels and movies. It was yet another way to reach Hogwarts if magic train, flying car, teleporting, dragon riding, or viking ship weren’t cutting it. Despite minimal screen/page time, he got his own Lego Minifig.

Well, my stop is coming up, time to hop off and head into the office. If you think of any other fictional bus drivers, especially with related collectibles, let us know in the comments!

Thought you would forget the Partridge Family, but I think you nailed them all!  🙂