Elva, a British Sports and Racing Car manufacturer, is the latest Official Archive to appear on hobbyDB.  This Archive is a little different, though, as the company’s last car was produced almost fifty years ago. But the Elva name lives on under the tutelage of Roger Dunbar (a.k.a.. ElvaRacingRoger), who is currently reviving the name for a new production car. He also happens to be the Curator of the brand on hobbyDB.

If you’re not familiar with Elva, that’s understandable. And unfortunate, as Elva made a series of relatively inexpensive race cars as well as production models of small, fast, sports cars. The name comes from Elle Va, French for “she goes.” Their early sports racing cars were seen on circuits on both sides of the pond, used for hill climbs and budget-minded racing series such as Formula Junior. Faster is usually better, so Elva race cars were found mingling with Lotus, Cooper and all the other serious manufacturers of the period.  The cars were continually upgraded and used a number of power units including Coventry Climax, Ford, Cosworth, DKW, Porsche, BMW, the V8 grunt from Buick and Chevrolet to make lightweight race winning cars. The cars are still raced around the world, often still bringing home trophies.

Roger Dunbar drives the Elva Service Truck to historic races and other events to fly the flag.

There was enough early success on the track to create their first road car, the sporty 1958 Courier roadster. It was essentially a front mid engine car using MGA ‘B-Series’ engines combined with swoopy, gorgeous fiberglas coachwork.  Development of the sports racing cars continued during the 1960s, New models included the beautiful GT160 coupe that attracted much attention but due to competition rules changing, just three prototypes were built.

Dunbar’s history with Elva is extensive. He has been with the company since 1970s, and in 1986, formed the Company Elva Racing to provide specialist parts and undertake vintage restorations and race preparation. “This involved in particular the marque’s sports racing cars and the Courier models on both sides of the Atlantic,” he said. “Elva Racing Models was just an extension of the intense interest in the marque.”

The Archive features information on the real cars, as well as various scale models. Many of the cars are made by Axel’R with cooperation from Dunbar. “We’ve commissioned various 1/43rd models of the GT160, Elva-Porsche, and Elva-BMW sports racers in different formats.” He said. As for what cars to expect for future scale offerings, Dunbar says “Whatever will attract interest and that we haven’t covered yet.  However there has to be an Elva connection.”

In the 1960s, slot car manufacturers produced a number of excellent kits of the McLaren-Elva series. Monogram, Tamiya, and AMT also offered some of their cars in 1/24 scale kit form.

As for Dunbar’s favorite full size vehicle, his answer is kind of tricky… “It’s the lovely old 1947 Elva Engineering van, which is a Morris Commercial type PV,” he said. So, not a sports car, but an exact replica of the support van for the original company. It can often be seen at Goodwood and other events. “I commissioned a stunning 1/43rd scale model of the full size van. We also have the Ford E83W pickup. Both of these vehicles represent the original workhorses used by Elva Engineering in the late 1950’s.” Of the more sporty cars, he would choose the Elva GT160. 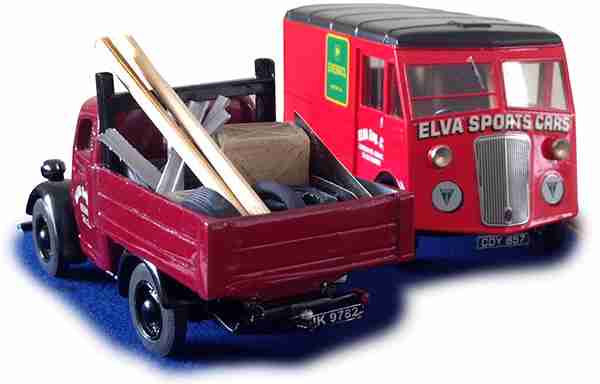 There is a surprisingly bulky award winning book detailing the history of the company available via David Bull Publishing entitled “Elva: The Cars, The People, The History” by Janos Wimpffen.

While the new Elva road/track car is close to being announced (and perhaps a model of it will be appropriate sometime) it’s nice to know there are faithfully produced models of the previous era available and maybe others on the way. “I have worked with various very talented model makers based in the UK and Europe who have skillfully produced excellent models on our behalf,” said Dunbar. “I’m always happy to hear from people who have an interest in Elva.”

Have you ever owned an Elva car? Big fan of the marque? Let us know in the comments!