With Hot Wheels celebrating its 50th anniversary in 2018, collectors have a wide range of ways to join in on the fun. Mattel is releasing a huge slate of special models in various series during the year, including some original Redline designs that haven’t been produced in a long time.

Some original models, like the Twin Mill, have more or less been in production the for entire half-century. Others, like the Classic ’55 Nomad, pop up every few years, sometimes as limited editions, sometimes as mainline cars. A few castings like the Snake and Mongoose funny cars have only been dusted off a few times for big occasions. And some, like the Custom Volkswagen, haven’t been reproduced since the 1960s.

The 50th Anniversary “Originals” are a mix of Redline and later castings.

For the 50th, there is a set called the “The Originals Collection.” The castings feature the ’68 Cougar, Volkswagen Beetle, ’67 Camaro, Custom ’67 Mustang, and Hemi Barracuda, with packaging that evokes a combination of the original flame job and the Spoilers. But the cars aren’t repops of the original Redlines. On the other hand, the RLC releases this year have brought out some extremely rare reissued Hot Wheels castings that are much truer to the real deal.

These special editions are, of course collectible in their own right, but how do they affect the value of the original models? Let’s look back at another major milestone where Hot Wheels did something similar.

It’s easy to tell the reproduction from the original, but does their existence still hurt the values of Redlines?

In 1993, Hot Wheels celebrated its 25th anniversary by reissuing some of the old Redline designs with retro packaging. Even folks who hadn’t thought about the brand since they were kids were instantly transported back when they saw Otto Kuhni’s orange and red cards with the sleek, shiny cars and the collector buttons. The repops were different enough from the old ones that they couldn’t be passed off as an old model… the cards had additional graphics (and bar codes of course), the cars didn’t copy the multi-piece wheel constructions of the originals, and the buttons were plastic instead of stamped metal. But the overall effect hit a very nostalgic mark. They followed it up the next year with “Vintage Series II,” similarly packaged, but not anniversary related. The response was enormous and universally loved. Well, maybe not universally… some people had gripes, as it turned out.

So what was the effect of those releases on collecting?

Of course, those 25th Anniversary cars are now 25 years old themselves. Remember, this was in the days before the internet really kicked off, so no hobbyDB, no eBay, no message boards, Facebook rants, Twitter storms, or badly Photoshopped rumors. These cars were available in toy stores first hand, or at flea markets or collectibles shops afterwards. Also, there was no way to gauge the price that folks were actually paying aside from what you found in the wild. 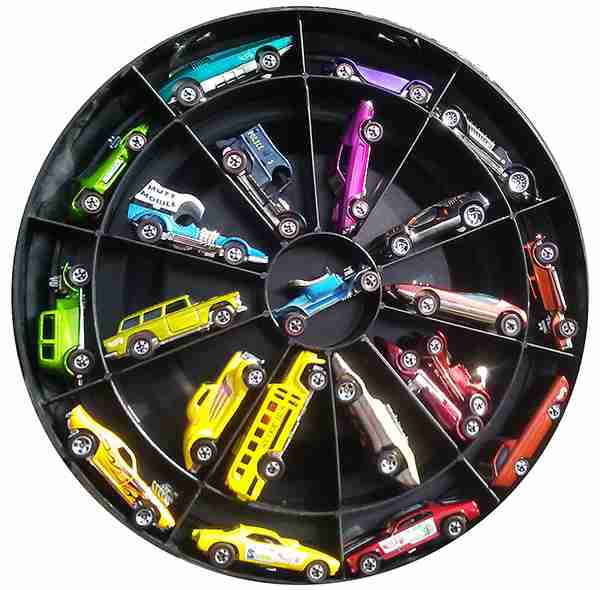 Casual collectors can make a case for anniversary repops. (Can you spot the one original car?)

Their values haven’t moved much in the past quarter century from when they first sold in the stores, partly because collectors were already becoming aware of the value of keeping their items in pristine condition (and since so many did just that, there’s an abundance of mint examples out there).  In fact many other models produced at the same time as these are much more valuable today.

Certain models in the 50th Anniversary releases have already shot up in value, at least for now. What happens over time is less predictable. The initial hype of “gotta have it” eventually stabilizes towards more reasonable prices with time. Or the prices shoot up as collectors realize the cars are harder to find than they expected, and they should have grabbed one when they had the chance. Short of owning a time machine, these reissues are the best chance for many collectors to get their hands on some of these early models without paying too much of a ransom.

What are your thoughts on Hot Wheels reproducing or reissuing older castings? Let us know in the comments!

I love the reproductions of the hotwheels car’s that Mattel is doing this year for they’re 50th anniversary thumbs up.

I did get all the original Hot Wheels when I was a kid, but then I stopped.  Got more into Dinky Toys and Corgis.   Now that Atlas has been reproducing the old Dinky Toys (under license from Mattel, of all places!!!), Dinky collectors are having the same discussions  Ron points out 4 bullet points, the first 3 apply directly to the Atlas Dinky situation.   The 4th is a bit different, I believe.

Hard core Hot Wheel collectors never had a hiatus between 1968 and 2018 – 50 years of continuous collecting.  Dinky did not, so there are 2 camps – many old Dinky collectors (yes, they are old like me) don’t feel the need to get the new Atlas Editions, unless there is some specific hole to fill and the original is too $$$.

Reissues are actually quite nice for collectors who simply can not afford the expensive originals, they can enjoy having a model that other wise would be impossible to obtain, so I think this is perfectly ok, the die hard collectors can have all the pride of knowing that they have an original…

I also love the vintage stuff and have some original redlines,but I think  the repos there making are great.

Sometimes a vehicle needs repair or a new paint job. During the process, sometimes, one may upgrade the quality of the vehicle as well. So, that being said, I really like seeing what surprises are in store for re-issued vehicles. How they stand up to older stuff and how they hold their own  place as well. I do, however, lament the loss of the piano wire axles. Those babies flew on the track and gave way to great suspension. Yet, I find excitement in that when something is revamped, it feels like time has come full circle, meeting the present and creating a thrill like that of my childhood. Keep ’em coming! Even if it is a repop, all in all, it is just a model on display for me which I do welcome happily…unless it rolls fast, of course…lol

I was 10 when Hotwheels came out. I loved them as a kid. I collect now mostly new stuff. If you ask many collectors they will say they won’t be buying them. They would rather put their money towards Redlines from the early years. As for me I like these celebratory editions. I have one carded redline from 1968 and these new ones look great next to them.

Quite simple, they need to finish it out by re-tooling all the redlines up through the late 70’s. Why, because the re-tools look awesome next to the originals and for the generation now collecting the re-tools they will eventually start to look toward the originals as those early collections start appearing on the market as that generation of collectors passes on. Value will all depend on the individual selling those collections as some will just want to get rid of the stuff and others will be selling at the current market value so there will be deals to be had in the future.

I have many original redlines and and all the re-tools of those as they were produced. I will continue to get additional original redlines as time goes by and any retool that gets produced. Over the years I have changed my collecting habits as the card art has developed and became part of the draw. In the beginning I opened everything so with over 50,000 Hot Wheels now, my estimate is between 10,000 and 20,000 thousand are opened with the bulk being the redlines and basic wheel era.

Bring em on, I will be collecting these until the day I pass on.