From Sketch to Blister Card: How Prototypes Shape a Matchbox Model

We recently met Rob Romash, who has worked in the design department for several companies including Mattel, and got to talking about the design process. For over 20 years (with various companies), Romash has been part of the team that makes the 3D prototypes of toys. He did just that for most every Matchbox car of the early 2000s. 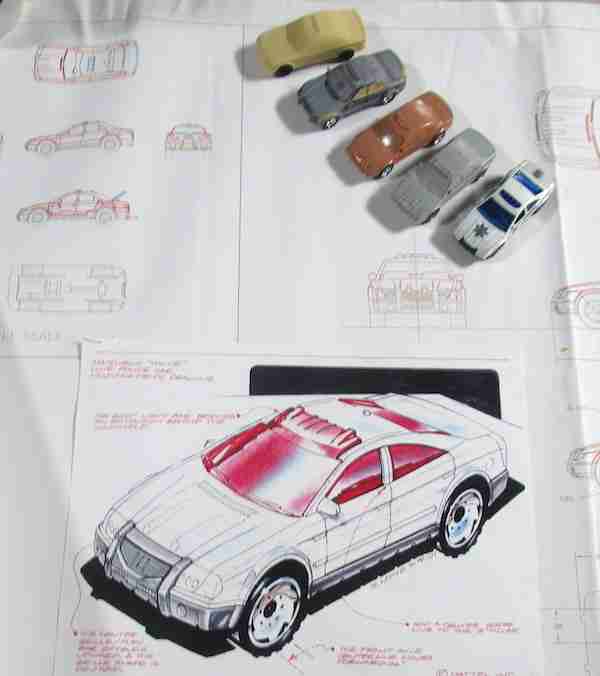 Some of the many steps towards the creation of a diecast car.

So we asked him how a diecast car goes from an idea to finished model on the pegs. How a bill becomes a law, so to speak.

It all starts with sketches, of course (as photos if the model is based on literal interpretation of a real car). Steve Moye was the lead designer during Romash’s tenure, and they collaborated on countless models. Once those are refined and agreed upon, the Master Modelmaker (Romash’s official title at Mattel)  figure out how big the vehicle will be.

The exact scale of a model car is up to several factors. Some companies like Wiking, make all their cars to a specific scale, such as their 1/87 models. A more common approach, like Hot Wheels and Matchbox take, is to make all the vehicles similar in overall size. Even though collectors refer to their main offerings as “1/64 scale” very few models from these will actually be exactly 1/64. Many will be larger or smaller. So a VW Beetle might be about as big as a Mack truck. As the model nears a certain size, available wheel options are often the factor that will decide if a model needs to go up or down a bit in scale.

At Matchbox, the process began with a “Butterboard” model carved from soft yellow foam. At this stage, the overall shape is represented minus any detail. In addition to wheel size, the vechicle must also fit existing packaging parameters.

This is the “Butterboard” size study, carved from soft foam for the 2001 Matchbox Police Car.

In some cases, the design of a real car must be tweaked proportionally to fit these requirements. “Selective compression” involves removing or reducing portions of a design in such a way that most people won’t notice. Romash’s collection includes a pair of Volkswagen Bulli (a modern VW bus concept) carvings that show an accurately scaled model that was too big, and a slightly compressed one that fit Matchbox paramaters. This scaling has to be done just right so as not to offend the licensing department at Volkswagen. 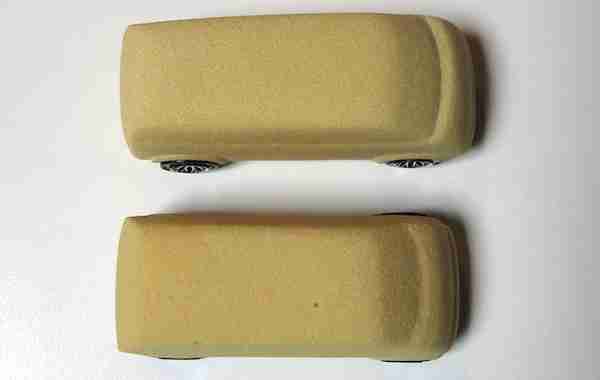 The longer version of the VW Bulli concept is more accurate, but the final design had to be compressed lengthwise a bit to fit packaging requirements.

Here’s a second “Butterboard” model, more detailed, painted gray, and with detail notes written on it. This is an unusual step, and not a lot of prototypes like this exist.

Traditionally, the first design study would be carved out of wood. When Romash was in the Mattel Mt. Laurel modelshop the preferred material for master patterns was an Acetate that had the properties for very detailed carving and the ability to revise the model without noticing. At times some models were modified on the fly during the sculpt process.  “It comes in giant monoliths like 2001: A Space Odyssey,” ( I had a great impression routine of the waking monkey from  the film when a block came in !) he said. “It’s simple. You just start carving away everything that doesn’t look like a car, and you’re done.” 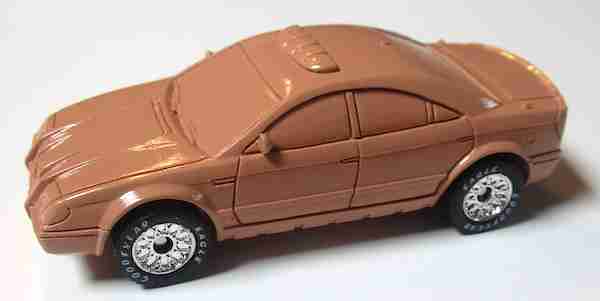 This is a pattern made from a mold based on the original carving. This would be cleaned up a bit, and in some cases additional details might be fabricated from other materials and glued on, but it’s essentially a single piece from which all future molds would be made.

For most small models, the prototype was usually carved at double size (so about 1/32 scale) to include more detail. Then a pantograph machine was used to make a smaller version (here’s a neat video that shows a pantagraph in action at Matchbox in the early ’60s. It’s the big machine at the 0:59 mark.) For most models, there may be a double sized buck in existence, but not for any of his.

Romash always did his carvings closer to the final, smaller size, allowing for a tiny bit of shrinkage from carving to first test mold . “If you give me a bunch of photos and a block of material, I can carve just about anything.” Romash also eschewed precise measuring tools, prefering to naturally eyeball the carving instead. His results speak for themselves. “I also created my own custom scribing and sculpting tools from carbide blanks to suit my style of building—a lot of 3M carbide sandpaper also came into play.”

“Moye’s sketches had a look and a feel,” according to Romash.  That’s what I went with, at least for the non-licensed models he designed, which was the larger part of the collection per year.”

You’ll notice the bodies on most of the prototypes are a single piece with solid windows and no consideration given to the chassis yet. Once the test casting is approved, it is sent to the factory overseas. As that point, additional designers will carefully remove the windows from the mold, and create a separate molds for those. Same for things like the grill or other details that will not be included with the main casting. Opening doors, hoods, and tailgates also must be taken into consideration here.

Here’s the first “Test Casting” of the design. Notice how everything including windows is a single piece.

Additional chassis details, as well as logos, trademarks, and other information are added as well. Depending on the brand, scale, and budget, the chassis may have a lot or very little detail In some cases, the engine, tailpipes, and other undercarriage details are kind of generic. As long as they line up where they’re supposed to for the design, it’s good enough. Also, at this time, the bits for attaching the axles to the chassis are figured out.

“Interiors are usually the least detailed part of most cars,” Romash said. “Unless it’s a convertible. I didn’t do a lot of interiors, but when I had the chance, it was fun!” 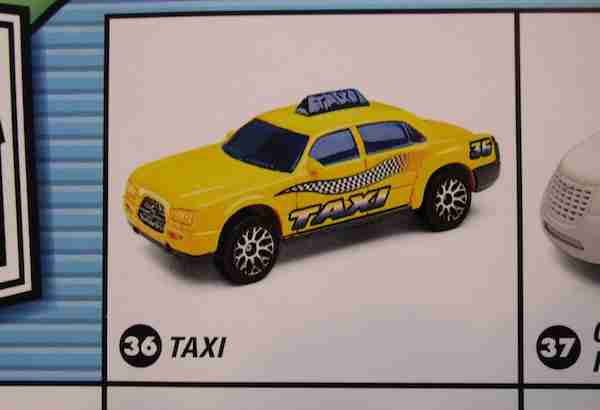 In some cases, a painted prototype might be used for promotional purposes, such as the Taxi on this poster featuring the new releases.

The next step is to create a Silicone mold for samples. Then a “First Shot,” wihch is a resin casting of the pattern model. These usually have some flashing and other imperfections, so they are sorted and smoothed out. At this time, the designer’s color schemes were implemented, and sometimes a prototype of a paint master was done. After the paint is agreed upon then more resin castings are done for sales or Toy fairs and other marketing materials. It may also be hand painted to give an even better idea of the final product. (Glenn Hubing, a good friend of Romash, was one of the painters for thise models. We hope to feature him in an article soon as well!) 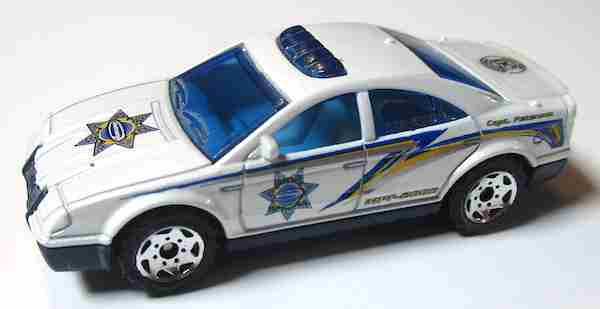 And here it is, the production version of the 2001 Matchbox Police Car.

Once all of that is worked out, final mold is made, usually with 10 of the same body (a “Ten-up” as it’s called in the industry). and production begins.

Much of this process has been disappearing over the past few years, however. As 3D printers become more precise, companies are first perfecting designs on screen and then having the printer spit out a more or less perfect replica. While it may be more precise, not to mention cost and time-efficient, a lot of the romance of the design process is lost.

In fact, Hot Wheels debuted the new VW Rockster as a “prototype” of sorts, assembling a limited edition of actual 3-d printed models on cards to sell. (If you produce replicas of a prototype for market, doesn’t that make it a production model?) It’s too early to see if the replica/prototype (Replitype? Reprotoica? Reprototype?) will catch on.

“When I was at Mattel, the model came first always, as the human hand can do things you can’t do on the screen. It’s also why pretty much every major car company today still relies on full size clay models for their final shapes before turning it into 3D data,” he said. “The art of the human hand does come into play.”

With 3D printing, prototypes like the ones Romash owns (and is offering for sale) are becoming a thing of the past from most companies. 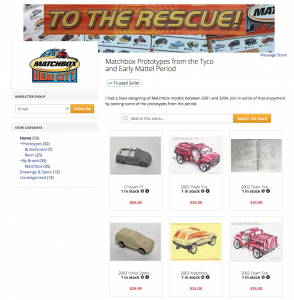 You can buy some of these prototypes in Robert’s store

If you want to own the real McCoy, you’re in luck… all the models you’ve seen in the article and dozens more, as well as sketches and technical drawings are for sale on hobbyDB. “I thought it would be great to pass some of these on to collectors who will really appreciate owning a bit of diecast history,” Romash said.