A Brief History of Matchbox in Germany 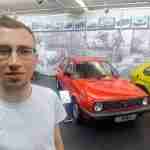 A Guest Blog Post from Christopher Leon Gaas, a collector of Matchbox and other 1/64 scale diecast with an interest in the history of the hobby.

Beside its huge history in the United Kingdom, the Matchbox brand also has something to talk about in German-speaking countries. With its rich history, some very nice special models and today’s fast-growing collector’s scene, there are great reasons to bring this turbulent story of Matchbox in Germany closer to the rest of the world. 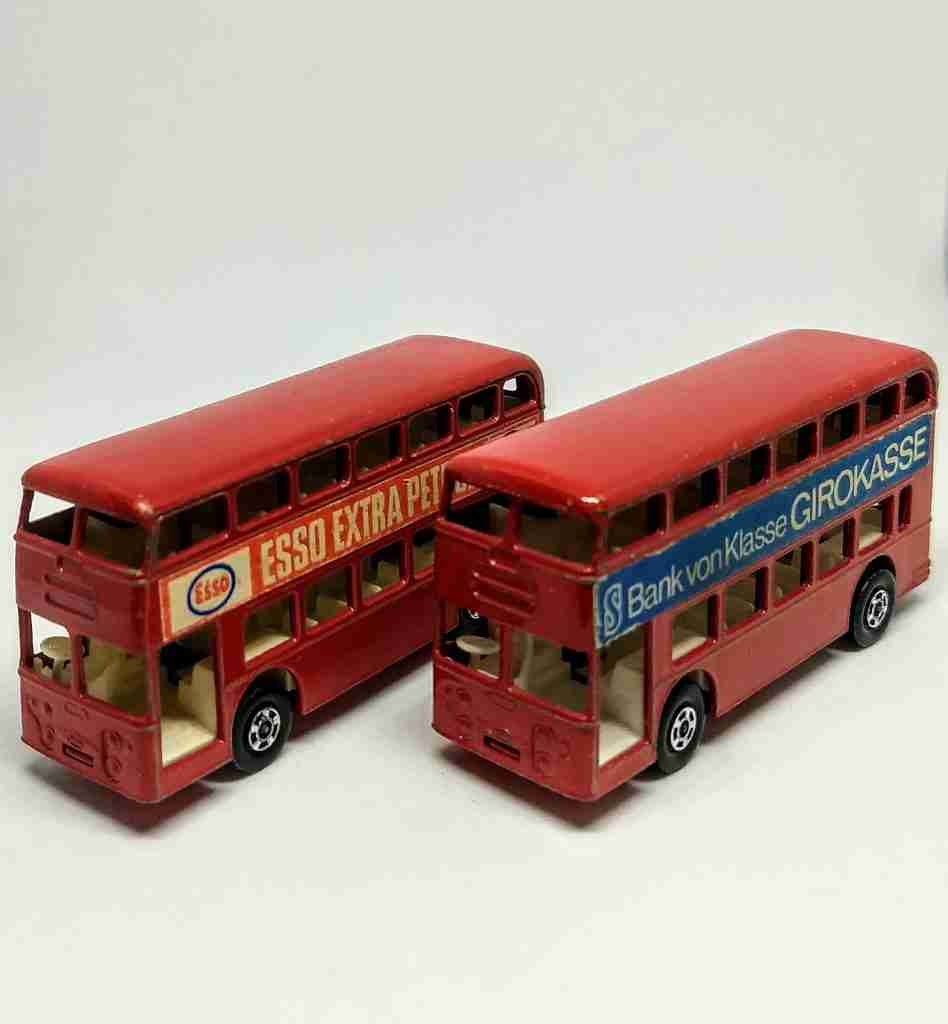 It begins in 1959: Jakob Prins, the founder of the Dutch toy company Edor, notices that the former dairy farm of the small town Rees in Northrhine-Westfalia was abandoned and buys the huge building as a new German branch of Lesney Products. Shortly thereafter, he purchased the distribution rights for Matchbox toys in the German area and expanded the company in 1964, 1966 and 1971 with three huge new storage halls. 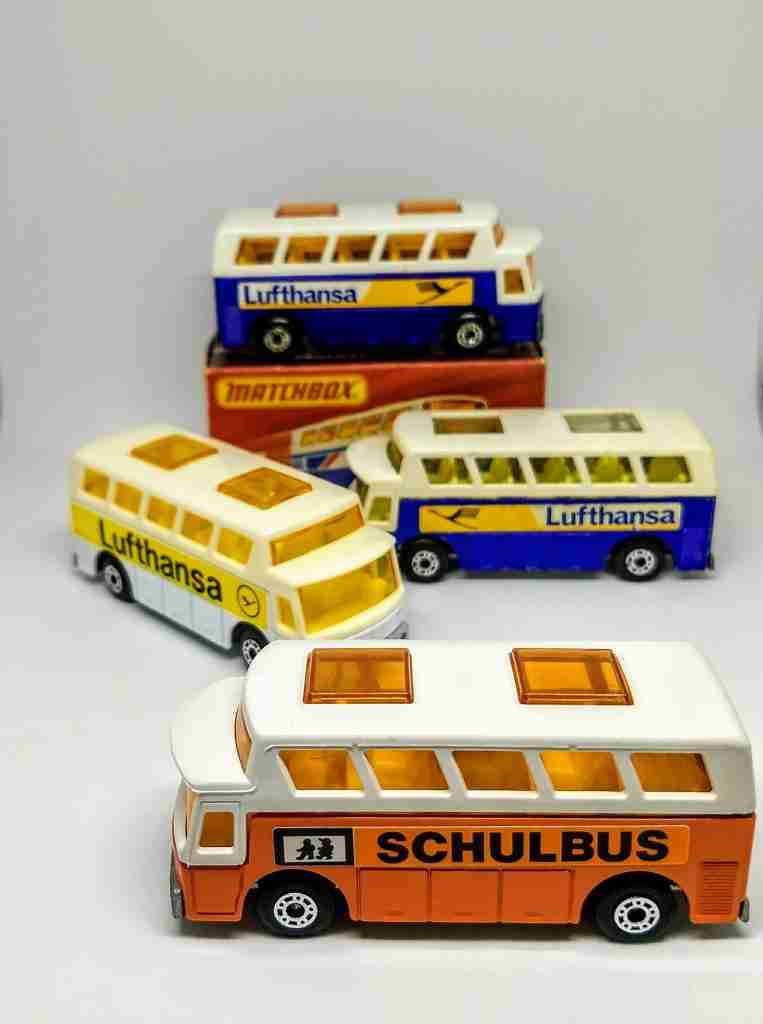 The huge expansion notwithstanding, the main subject of the new factory in Rees was mainly packaging: the Matchbox products were produced in England and a lot of female workers from Rees and surrounding villages were responsible for packing these into boxes for sending to German toy stores. Only the game ‘Cascade’, made in 1971 without any car content, was ‘Made in Western-Germany’.

As Jakob Prins became too old to watch over the complete factory, he named another Rees resident, Theo Wissing, as the new manager. Wissing received his own flat in the main building and became head of nearly 70 employees. Everyday, two huge overseas containers from Rotterdam port arrived in Rees. After a check from the customs office they were re-packaged and were distributed across West Germany.

In 1980, after a few successful years in Rees and after the retirement of Prins, workers received a difficult message: The new managing director, Paulhans Handrick, told workers about a planned move to Hösbach in Bavaria and the closing of the Rees factory. Even a visit of the former Rees mayor Josef Tasch at the Matchbox headquarters in London wasn’t enough to keep this important taxpayer in Rees. As a native inhabitant of Rees, Theo Wissing, one of the most important men of the early years, stayed in his hometown and left the company in 1980. 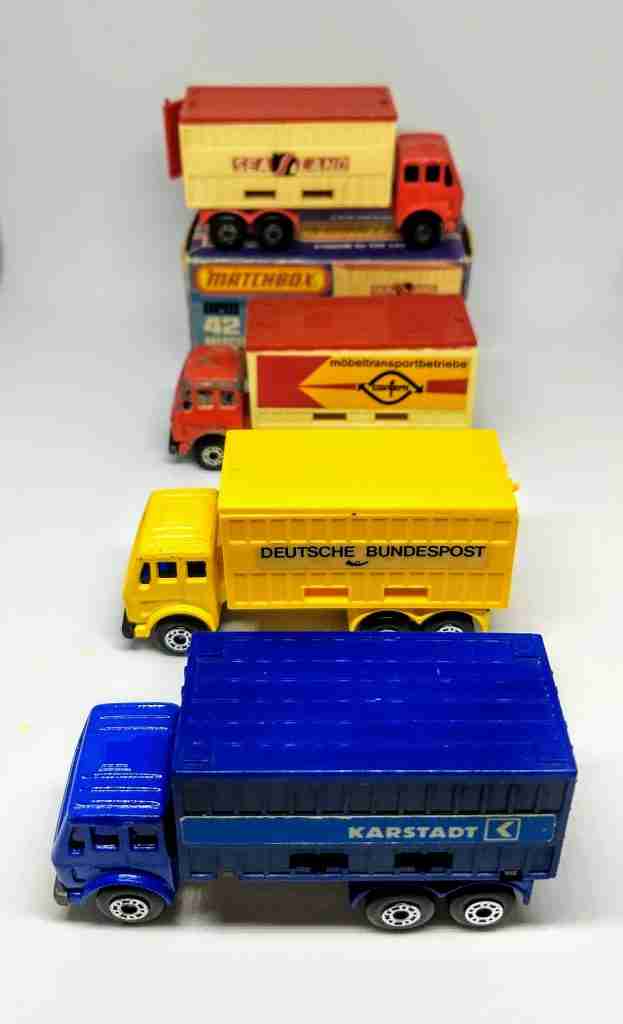 Everything started new in Hösbach. Handrick, the new manager, remained in his position until the 10th December, 1980 and was then succeeded by Ernst Zillig who held this job until the 16th of April, 1983. His successor was the well-known Ludwig Darmstädter who led the company until 1994. The work in Hösbach remained nearly the same as in Rees: the models shipped from the United Kingdom were now unpacked by Bavarian ladies and went to the many shops and department stores in the West-German area. One very remarkable feature in the new company was special-designed red and yellow boxes with an unusual version of blisters in a cardbox. Today, they are named ‘Hösbach boxes’ after the new location of the Matchbox factory. 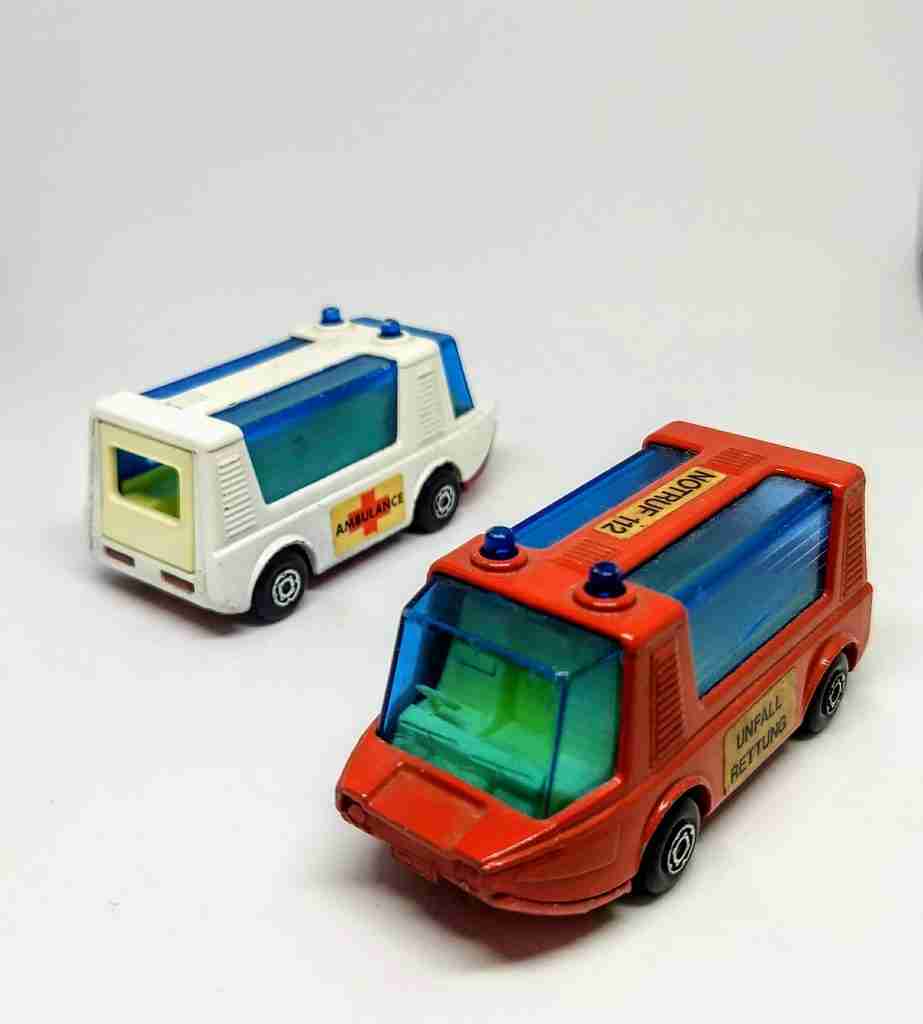 Following a few management changes in the years between 1980 and 1993 the German branch was sold in 1994 to the American company Tyco and the budget raised from 1 Million DM to 17 Million DM in November 1995. In 1998 Mattel bought the company and the German Matchbox history was over.

A very rare sight compared to  models from the Soviet Union, Matchbox was also present in communist East Germany. It was very difficult to obtain new models and they were more or less only sold in the ‘Intershops’ in bigger cities. Due to the issues between capitalist and communist countries at the time, some of these models were visually changed in East Germany because brands like BP and Esso were companies from the enemy behind the Iron Curtain. On the cover of the 1979/1980 catalogue for example, the American Space Shuttle was removed. 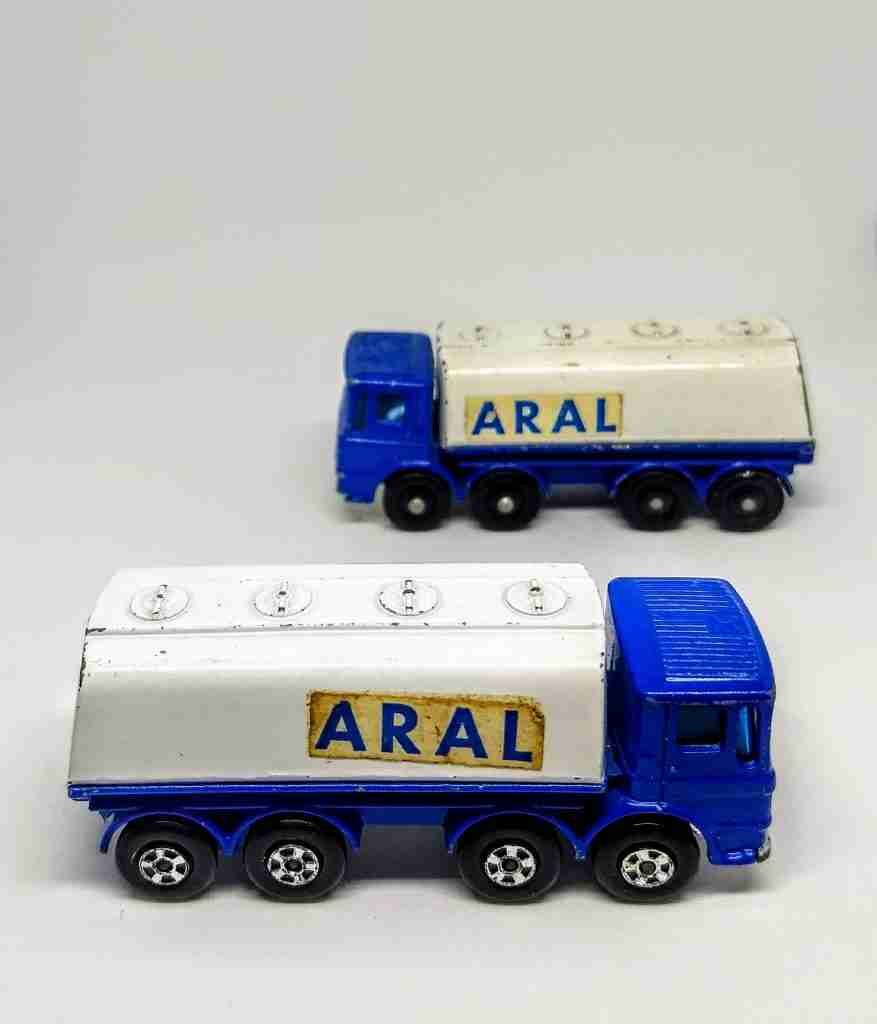 Besides many British and American special models, Germany is one of the countries with the most issues of German commercial models.

The first German model was the Aral variation of the 23C Petrol Tanker in 1963, the first unofficial modified Superfast model followed in 1970: a ‘Bank von Klasse – Girokasse’ version of the No. 74 Londoner was used a a giveaway for customers of the German Savings Bank ‘Sparkasse’. During the course of the 1970s the numbers of commercial models increased every year. For example, Matchbox used the famous brands and clubs ADAC, Esso, Aral and Lufthansa for their models and even made a few German versions of the Mercedes Container Truck No. 42: A ‘Deutsche Bundespost’ (German Federal Mail), a ‘Confern Möbeltransporte’ (furniture transport) and a ‘Karstadt’ version that was only available at Karstadt warehouses and is hard to find today.

The only special edition made for East Germany was a K-15 Londoner variation for the 750th anniversary of Berlin, the ‘capital of East Germany’ in 1987. 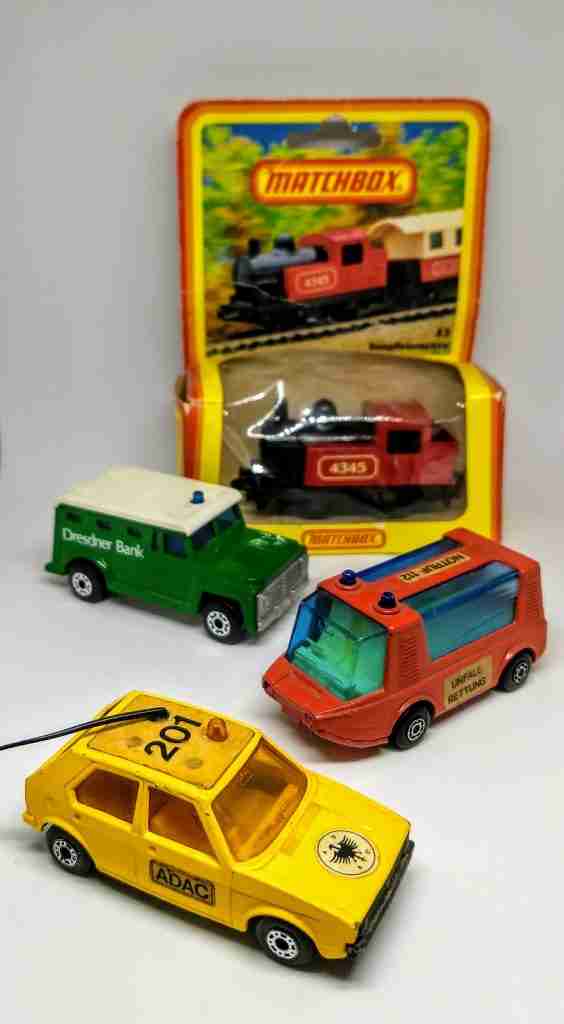 Some other models for the German market

Matchbox in Switzerland and Austria

The two other German language countries, Switzerland and Austria, have a unique history of Matchbox which is even older than in Germany. From as far back as 1956 (!) the Waldmeier AG in Basel was the distribution partner for Lesney products in Switzerland. They held this position until 1979 when Matchbox looked for a new partner.

Waldmeier successor was the Joker Group from Zurich, which was founded exclusively for this purpose. With the end for Matchbox in Germany in 1994, the history of the Swiss branch also ended.

Very nice!  It’s great to see such unusual versions of the old Matchbox.

They are quite common in Gernany but some are defininetly hard to find. 🙂

May I add that before the advent of Edor, the Waldmeier company also supplied Germany (at least southern regions) from their German facility in Freiburg, not far from Basel but across the Swiss-German border. Waldmeier produced both Swiss and German versions of leaflets showing the first Matchbox models – very sought after precursors of the later Matchbox pocket catalogs.

The Austrian Matchbox distributor from the early 1960s until the early 1980s was a Viennese company called Berrick Brothers –  I wish I knew more about them. Berrick Brothers also imported Corgi and some other British toy brands. In the early 1970s they had stalls at Austrian racing shows, and they were active as motor racing sponsors. As a result Matchbox adverts can be found in the program brochures of some Austrian motor racing events. Another result was the appearance of the first Matchbox exclusive model for Austria: the “Sepp Manhalter” BMW 3.0 CSL issued in 1977 in the unique color of white with a label depicting Mr. Manhalter’s signature on the trunk. (Sepp Manhalter is a well-known Austrian touring car racer who still appears at historic events nowadays.)

After the end of Lesney, Matchbox distribution in Austria was handled by the Kundegraber company located in Enzersdorf/Fischa in Lower Austria. This lasted until Tyco took over and created its own subsidiary in Austria, which then gave way to Mattel.

Have you seen the hand-drawn Waldmeier catalog?  Pages 1 and 3 here: http://www.vintagebritishdiecasts.co.uk/forum/viewtopic.php?f=10&t=4658&start=20

Have you seen these ads?  Just a coincidence, or the same brothers?

Can anyone tell me if there are pictures of a German catalog that shows all the yellow German Hosbach models? Thank you