Patrick Wehr, AKA ptkwr52 is our European correspondent for all matters Automobilia. Read all of his reports here.

The Citroën DS19 was the successor of the Traction Avant and was first presented at the Paris Motor Show on October 5, 1955. During the first 15 minutes of the Motor Show, 743 orders for the futuristic new car were taken, and a total of 12,000 orders was reached at the end of that day. By the end of the show, after 10 days, some 80,000 cars were ordered, which was a record which stood for over 60 years, though Insiders think that those selling numbers were only a marketing trick.

The car was designed by the Italian sculptor and industrial designer Flaminio Bertoni, as well as by André Lefèbvre, a French aeronautical engineer. The futuristic hydro-pneumatic self-leveling suspension was developed by Paul Magès. The car was such a success for aesthetics and engineering that it has inspired countless scale models.

The car was manufactured from 1955 to 1975 as a sedan, wagon/estate, and convertible. It was also the first production car that was equipped with disc brakes.

The DS used hydraulics for the power steering, the brakes, the suspension, the clutch and the transmission. In fact, with all that new technology it was a very expensive car, so Citroën decided in 1957 to produce the cheaper ID19. This car would have a conventional transmission, a simplified power-braking system and lack power steering. The ID was also not as powerful or luxurious. Maximum power for the ID19 was 69hp compared to 75hp for the DS. The ID submodel was produced from 1957-1969.

In 1962 the nose was redesigned and designated as Series 2. The car was more aerodynamically efficient and had also better ventilation. It was now available with an optional set of driving lights mounted on the front fenders.

French President Charles de Gaulle survived an assassination attempt at Le Petit-Clamart near Paris on August 22, 1962 while in a DS. The plan was to ambush the motorcade with machine guns, disable the vehicles, and then close in for the kill. De Gaulle praised the unusual abilities of his unarmored DS with saving his life – the car was peppered with bullets, and the shots had punctured the tires, but the car could still escape at full speed.

In late 1967 another new nose design with directional headlights came, now called the Series 3. That 1968 model of the ID/DS series had four headlights under a glass canopy. The inner lights swiveled with the steering wheel. For the US market this feature was not allowed, so a version with four exposed headlights was made for the US market.

The most collectable and rare variants are the convertibles produced from 1958-1973. They were built by the French Carrossier Henri Chapron for the Citroën dealer network. Only 1,365 Convertibles were sold, due to the high price of that variant. On these, a special frame was used, which was similar but not identical to the frame of the Break variants.

Before the war, Chapron built some custom made bodies for Talbot-Lago, Delage and Delahaye. In 1955 he turned his attention to Citroën, and he was commissioned to build a Décapotable for the French President based on a 15CV Traction. At the Paris Salon in 1958, he showed his first DS based creation, known as the Cabriolet DS19 Henri Chapron.

The Michelin Citroën DS PLR Break, “Fast Truck” or nicknamed “Mille Pattes,” was a tire evaluation car. It was based on a DS Break and was built in 1972 by the French tire manufacturer Michelin, who was a shareholder of Citroën. It was used on the Ladoux test-track in Clermont-Ferrand.

The DS was successful in motorsports and won the Rally Monte-Carlo in 1959. The 1000 Lakes Rally was also won by a DS in 1962. In 1966, the DS won the Monte Carlo Rally again. The DS was still competitive in the 1974 London-Sahara-Munich World Cup Rally where it beat over 70 other cars, only five of which even completed the entire event. 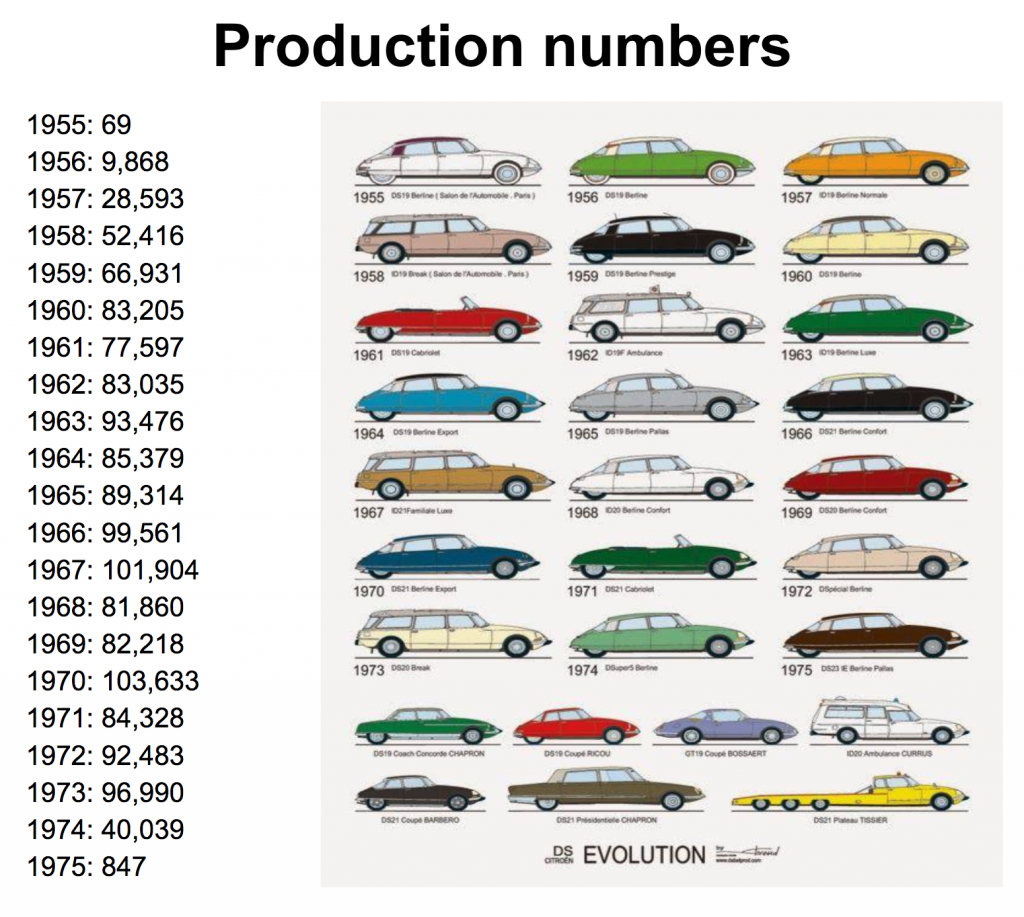 A great blog post – a fantastic car and history.  Thanks for posting it!!!  Did you know that DS is a play on words – it is pronounced D S or Déesse in French, which mean goddess!

Great post. I have to say that the Citroen has a unique look compared to the other French brands.

I saw a well-maintained DS21 a few years back and it’s the kind of car you just wanna go cruise on a nice long windy mountainous road.