A couple weeks ago, we brought you the story of Rob Romash, Master Modelmaker for Matchbox in the early 2000s. His ability to translate sketches and technical drawings into perfect prototype carvings was amazing, and he was responsible for most of the castings of that era. Now, meet Steve Moye,  the creator of most of those designs. 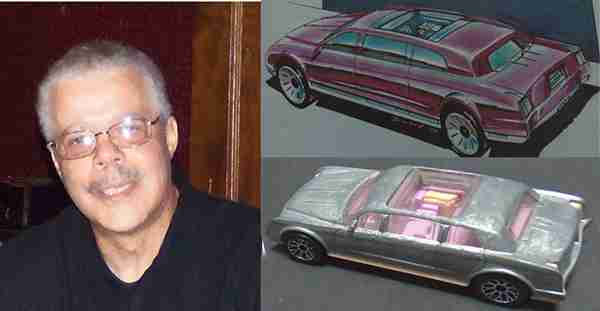 Former Matchbox Senior Product Designer with one of his all time favorite creations.

Moye worked with Romash at Mattel in Mt. Laurel, New Jersey, from 2000-2005 as the Senior Product Designer. “I worked on almost all of the non-licensed basic (3” long) Matchbox vehicles, plus launcher-type toy vehicles and two special marketing/packaging diecast-related toy products,” he said. “Also, during the last eight months of the Mt. Laurel operation, I was also responsible for the licensed 3” long vehicle design process, including selections and graphic decoration designs. Rob Romash and I had a very special designer-modelmaker relationship. In the five years that Rob and I worked together at Mattel, he always seemed able to translate my ideas into three-dimensional reality, many times on-the-fly, and always arriving at great aesthetic and functional solutions in a timely manner.”

Matchbox cars could be grouped into two categories: licensed designs (based on real cars or pre-existing designs from elsewhere), or unlicensed designs (newly imagined vehicles.) The key to the unlicensed cars was to make them plausible in function and aesthetics without stepping on any copyrights, while still giving these little rolling vehicles play and collector value and doing it mostly with three or four manufactured parts, for retail at $1.00 each. In other words, the designer’s responsibility was to create a vehicle that looks and rolls like a real-ish car, but not like any particular brand. 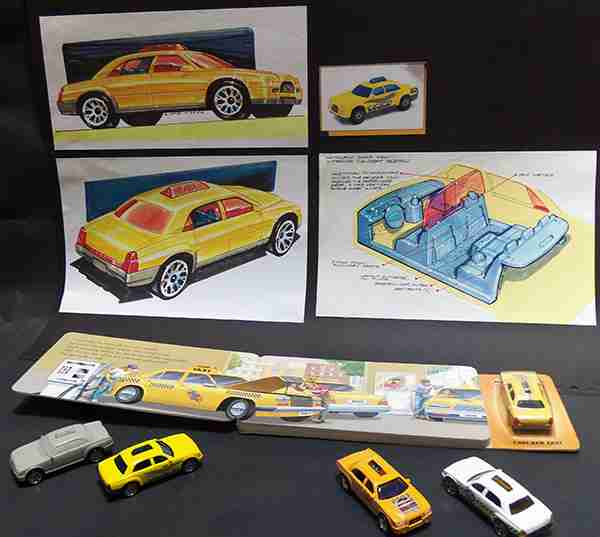 Moye worked on the sketches and technical drawings for most Matchbox 3″ offerings in the early 2000s, such as this Taxi.

One of the first steps to designing a new model was figuring out what exactly Matchbox wanted to offer for sale. “There would be internal discussions of what models in Matchbox’s 1-75 lineup were outgoing, where we had new opportunities for our offerings, and what we needed to replace,” he said. “We needed X number of cars to fulfill some new purpose, to fit into an overall marketing theme.”

That’s when Steve’s task would begin. For licensed vehicles, straight interpretations of actual cars and trucks, there was no need to create concepts. “On those, the manufacturer would oftentimes submit a folder of photos and measurements; then, it was straight to tech drawings.” His ability to translate those materials was no doubt helped by his previous jobs in the design departments at Chrysler and Subaru. His understanding of automotive design, both engineering and aesthetic, made him a natural for model car design.

Some designs translate from sketch to production without any discernible changes like this 4×4 Fire Truck.

Early on, Steve jumped pencil-first into projects in progress, and eventually became part of the Matchbox die-cast decision-making team, headed by Trevor Hayes, Rob Butkiewicz, Jim Carty and Berdj Mazmanian. “When I first started working at Mattel Mt. Laurel in early 2000, I didn’t have much leeway in selecting vehicle types because we were in a crunch to get the design process on already-approved vehicles going.” Moye said. “Eventually, I also became involved in the vehicle selection process, too. While a specific design was being created, I did have quite a bit of leeway in changing and improving aesthetics and functionality before a vehicle received its final mid-management and upper management review and approval.”

Another challenge at Mattel was to avoid stepping on toes at the company’s other big diecast brand, Hot Wheels. Hot Wheels generally was the domain of flashy fantasy racers, while Matchbox became the brand known for more realistic, down-to-earth models. The goal: a $1.00 product that was realistic, but to save Mattel royalty fees, often not based on a real car. Hot Wheels was also becoming the brand for older kids and collectors, while conversely, Matchbox was being marketed to the younger kids. “A lot of the collectors and Matchbox purists didn’t like that shift away from licensed designs,” he said. “Collectors understandably wanted more of the realism that was part of Matchbox history.”

This dump truck was aimed squarely at Tonka’s foray into 1/64 diecast.

In total, Steve created 70 die-cast vehicles for Matchbox in his five-year stint at Mattel Mt. Laurel, plus two launchers and two diecast-related packaging designs. When one multiplies that figure by the number of vehicles each die cast tooling mold set is capable –a conservative estimate is 100,000 cyles-per-mold set– of making, it’s easy to conclude that his rolling creations easily got into the hands of millions of worldwide scale model car collectors, both young and old.

Whereas Romash sort of stumbled into his prodigious career at Mattel by turning a hobby into a job, Moye took a more calculated route. “My San Jose State University Bachelor of Science degree is in Industrial Design; before that, I attended Art Center College of Design in Pasadena CA, preceded by a correspondence course –Academy of Automobile Design- in car design,” he said. Since age 12, Steve’s career goal was to design cars, just maybe not in miniature. “Incidentally, I was the only correspondence student to actually complete the entire course. J. Bruce Bollinger, AAD’s originator and the designer of Chevy’s original Nomad, actually had to create new courses for me, and those led to my first vehicle design portfolio.”

Prior to Mattel, he held a similar job at Paramount Industries in Philadelphia designing for the Franklin Mint and Exoto, among other clients. Automotive design conceptualization, however, wasn’t part of the process at Paramount, as their models were exclusively based on existing classics; hence, his work on die-cast classic vehicles involved technical drawings, with an occasional on-site photo shoot/documentation session for good measure. “The big challenge for ‘The Mint’ was that many of the cars were vintage ones so at times, we had to find a collector with a restored car to document and use as a guide. There were no company archives of material to work with, because many of the auto companies don’t exist anymore.” 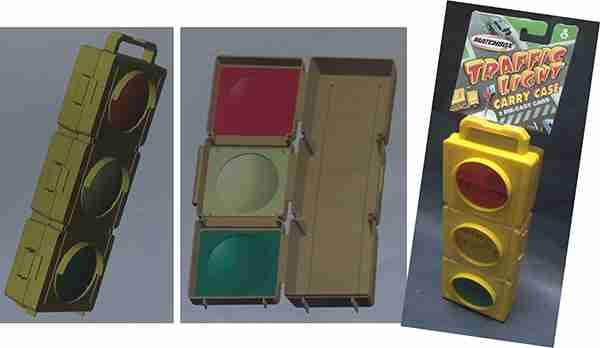 Moye designed this carrying case while he worked at Mattel.

Over his six-year stint at Mattel, he rarely ran into any issues with designs which closely resemble a copyrighted design. “I did a trash truck in 2005 before the Mt. Laurel operation was given notice to shut down, an original design,” Moye said. “But I later heard that one of the OEM manufacturers thought the back end of the truck looked too much like their rear crush mechanism compartment.” Aside from that, the vast majority of the designs he worked on while at Midlantic Drive in Mt. Laurel, NJ went into production with relatively few hitches. Steve still has a collection Matchbox models, many of which emanated from the entire design process; a few are shown here.

The final production model can take on many variants, resulting in tens or hundreds of thousands of copies.

Moye and Romash have remained in touch over the years, fondly remembering their days creating the toys and collectibles that fueled the imagination of kids everywhere. “Mattel Mount Laurel was such a great place to work. The place was staffed with good, friendly, talented and skilled people, from the executives on down to the marketers, the graphics folks, the engineers, the product planners, the separate modelmaking staff which Rob Romash was a big part of, all of the creative folks over in the Matchbox Collectibles, Tyco RC, and Tyco divisions, my hard-working graphic design compadres Christine Peterson, Jeff Osnato and John Mullane in Matchbox 1-75 and, last but not least, Midlantic Drive’s great support staff. I was sad to see it close.”

Great article.  It’s fun to learn about the origins and designs of these little toy cars.    Mattel got Matchbox in 1997, I think.  What happened in 2005 that Mt laurel was shutdown?  Where are Matchbox designed now?

Matchbox’s 1-75 line are being designed in El Segundo now, at Mattel headquarters. The vast majority of what I’ve sampled from their ’05 and on line are, in my opinion, well thought out.
They’ve done a good job on their 3″ diecast line, given everything.

Steve, you rascal.  All these years I’ve known you online & this is the first I have heard of your talent.  I have 4 boys & a girl who loved those little vehicles.  I  did my share of keeping the Matchbook vehicle business going!