We recently told you the histories of Matchbox Senior Designer Steve Moye and Master Modelmaker Rob Romash, part of the talented team that created many of the brand’s model vehicles in the early 2000s. As much fun as they had working there, not every project goes through without a hitch. From misinterpretations to budget cuts to secretive licensees, here are some of Moye’s more interesting stories about projects that ran into an extra challenge somewhere on the journey from initial sketch to hanging on the pegs. We’ll leave it mostly in his own words…

The challenge with this Dune Buggy: use as few parts as possible.

How many parts in a diecast model? As many as it takes, right? In some cases, the company might dictate that a vehicle must be made of a limited number of parts regardless of design… “This 2003 Matchbox Dune Buggy was the result of an internal cost-cutting experiment, trying to see if it was possible to design and produce a marketable rescue-themed three-part vehicle (chassis, body, and interior… existing parts such as wheels and axles don’t count in that number). It was eventually adapted for use as a McDonald’s offering. We also were able to add a promotional Fire Engine and a Police Car for
McDonald’s, based on the three-part concept.””

A trash truck has to have moving parts, right?

Sometimes it takes extra effort and cost to make a working model, but in the end, the results can be worth the struggle… “This Trash Truck actually works as a pickup/dump vehicle with its own separate trash bin. It was a real internal battle to fight for the additional parts, and win, but the extra cost made this toy possible.

Some of the finer details of this model were lost in translation.

Sometimes management dictates a change to the processes that have worked for so long, resulting in a new learning curve… “In 2004, Mattel implemented some cost cutting measures by moving part of the design modeling process overseas. Issues surfaced early and often, when sources in Asia tried to translate sketches, orthographic and exploded views into Solidworks files. It took many back & forths in e-mails and telephone discussions for them to even be able to get us something that wasn’t ‘block-ish.’ I don’t dislike the final result, but….I’m also confident that had we involved Rob Romash  in the process, the final ’04 City Police Car -particularly the upper front fenders and other crucial areas– would’ve been much more to my liking.”

Freed up from marketing demands, this fire truck turned out much better than previous designs.

Corporate management can sometimes make demands of a design that are hard to work with… “After an attempt at adding more kid-oriented, animated vehicles (a few of which I also designed) to Matchbox’s 3″ 1-75 lineup, some of us were able to convince management into getting our model shop back into the process. The last Matchbox Fire Truck embodied elements which I learned over the previous four years designing 3″ vehicles; plus, I wasn’t encumbered with trying to design vehicles with exaggerated ‘super-heroic’ width proportions.”

Being freed up from those demands led to some great work. “The result was what I consider to be my best non-licensed fire truck, and Rob did his always-superb job of translating my sketches into the final 3-D model and finished product. These models would eventually wind up as Matchbox’s last Mt. Laurel NJ-sourced products before the facility closed.”

The sides on the bus go ’round and ’round (unless they ended up being straight).

Some designs aren’t easy to produce with traditional modeling processes, resulting in unexpected compromises… “On this 2005 Matchbox City Bus model, the difference between what I proposed and what Rob carved out, (a bus with rounded sides and front end) and what Mattel wound up producing (flat sides) is huge. This major change was only discovered when the production City Bus hit the store pegs, long after Mattel Mt. Laurel’s closing.”” 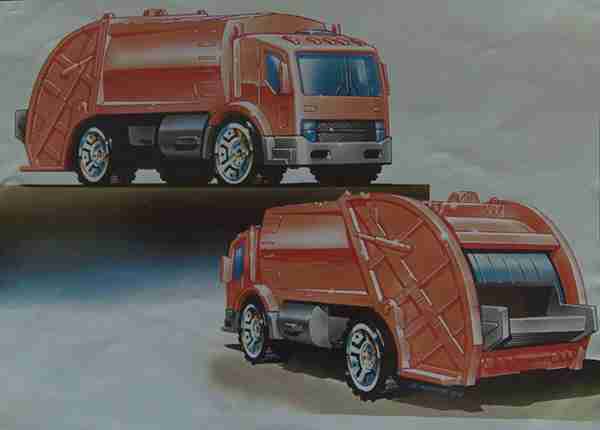 An original design, but someone apparently thought it looked familiar.

Sometimes a design issue catches you completely off guard… “This trash truck was an original unlicensed design that shouldn’t have run into any issues. But apparently the rear crush area raised some questions with an original manufacturer of trash trucks. The design was eventually produced, however so they worked it out.”

General Motors was secretive and (accidentally) very helpful with this ‘Vette.

Sometimes a licensed design is the subject of cloak and dagger work. You have the permission of the licensee, but they are only able to help you so much… “The last licensed vehicle I was involved in was Matchbox’s 2005 Corvette C6. The big problem: because of secrecy issues, GM was loathe to submit detailed information to us! Their 3D files were as vague (blobs!) as I’ve ever seen, almost unusable. So, I was forced to gather as many ’05 ‘Vette magazine ‘spy shots’ as I could find, do my best to draw them up, and take them over to Rob Romash to make a plausible 1/64 model. Given what we were and weren’t given, Rob did a fantastic job, in a rush situation, making a C6 model that GM reviewed and easily approved.

Every now and then, luck smiles on the designer in such situations, however… “Towards the end, GM mistakenly sent us a 1/18 scale Hot Wheels prototype of the same ‘Vette! Having that at our disposal allowed us to add an accurate underneath chassis, and to double-check the exterior details which Rob and I discerned. Amazingly, Rob only had to tweak a few minor areas before painting and submitting the final 1/64 scale model.”

Great stories – thanks!  It’s too bad about the City Bus – the drawing looks so much better than the final product.

Agree with you, at times once a model left us the toolmakers would put their own stamp on them…..more then not the ugly stamp. The curved face bus look tons better.

I have noticed that anytime they redesign a model and renumber it, they cheapen it somehow.  Usually by replacing a diecast part with a plastic part.

But there is sometimes some good news.  Often the casting has a little more (or better) details.

The steel molds will eventually wear out as well. When you see an older matchbox

model in a 5 pack that’s a good indication that the mold is near worn. The prototype casting are the closet you can get to model with zero mold wear.