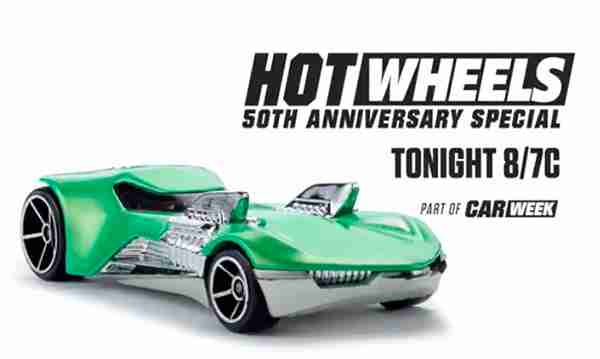 In case you missed it Thursday night, The History Channel aired a one hour “Hot Wheels 50th Anniversary Special” with plenty of interviews, diecast images and video, and, well, history of the brand.

Larry Wood, who has been one of the principal designers for the brand since almost the beginning, had a lot to say. (“We weren’t even paying Barbie’s taxes,” joked Wood about the humble beginnings compared to Mattel’s other big brand.) So did Jay Leno, known for his very large collection of full size cars, but also an enthusiast of the smaller ones. And several current designers, who clearly enjoy their jobs more than most people ever will. 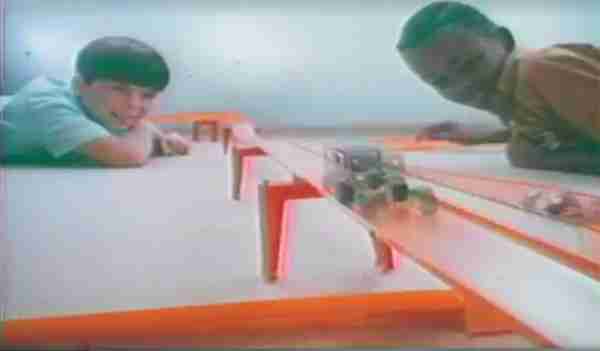 Some of the most compelling bits during the hour were the vintage commercial clips, with bombastic announcers and amazingly well-shot footage of Hot Wheels cars in action. If you’re a certain age right now (Hot Wheels’ 50 plus a few years to be old enough to have gotten in on the ground floor), those commercials were the voice of God, speaking directly to your 5, 6, 7, ten-or-so-year-old self.

Discovering that the oil crisis in the ‘70s threatened to kill the brand? A terrifying glimpse into a sad alternate reality. Finding out that the orange track started out as garage door seals turned upside down? Let’s just say a good part of your happy childhood was discovered by accident. 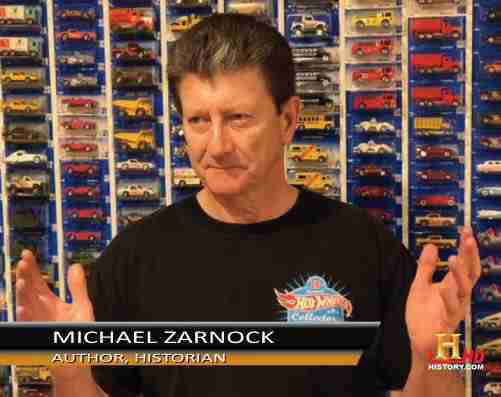 Aside from Leno, the most screen time from a non-Mattel employee went to Mike Zarnock (“Hot Wheels Expert/Collector” according to one on screen blurb.) Zarnock, is of course, a legendary historian and ambassador for the brand. Seeing photos of Harry Bradley’s custom El Camino, which served as the basis for the Custom Fleetside was a blast.

According to professional Diecast customizer Chris Walker, “To make the perfect car, many cars have to die.” Really, as much as we like to protect and preserve our Hot Wheels, taking them out of the package and making them less than mint condition is what makes them so beloved. And if you can chop and reassemble them into something new, then you get to turn playtime into a career. 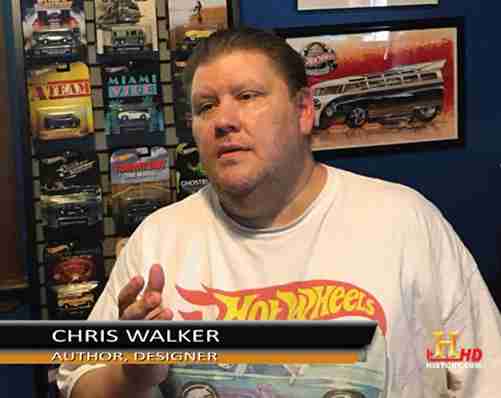 Zarnock and Walker originally didn’t expect to have as much screen time when first approached by the History Channel. “My role in the show initially was just going to be just to say a few words about Hot Wheels and the hobby at the Dallas Hot Wheels Nationals,” said Walker. “After talking with them and showing them on camera all about room to room shopping and what we do, they went  changed up the direction of things based on the chemistry of myself and Mike Zarnock.”

A lot of the show centered on the quest to design “HW50,” the car that is supposed to sum up the entire 50th Anniversary. Designed to be a  “statement of our heritage and our future,” the car is being built as a 1/64  model and a 1,000 HP running full-size replica. (Yes, the real car will be a replica of the model. It’s been done before, actually… ) The amount of 3-D CAD rendering used to design the car is both mind-blowing and a bit melancholy. Revealed in sketches and painted prototypes, HW50 looks to be a suitably retro yet modern car that should honor the legacy of the brand.

This is about the best look you get at the HW50 until Fall.

As far as reliving your childhood through collecting, there are different takes on that. Walker, whose collection started with the Mach 5 inspired Second wind, but now owns over 10,000 Hot Wheels Cars said “A lot of people say collecting is our way of buying back our childhood. I say it’s more buying the childhood we never had.”

Expect the Hot Wheels 50th Anniversary Special to show up on The History Channel many times over the next few weeks, and also to make it online eventually. 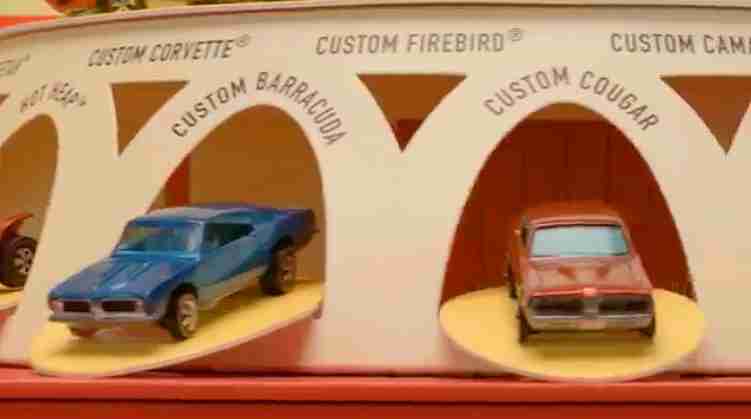 Oh no, I missed it.  Hope they put it online soon.

I have not seen it, and will hold judgement until I do, but for me there was never anything as detailed and true to life as Randy Leffingwell’s book 35 years of Speed, Power, Performance and Attitude.

Randy’s Book is definitely a book every HW Collector should have.