Pops! For Patients and hobbyDB Team Up to Provide Toys to Kids in Hospitals 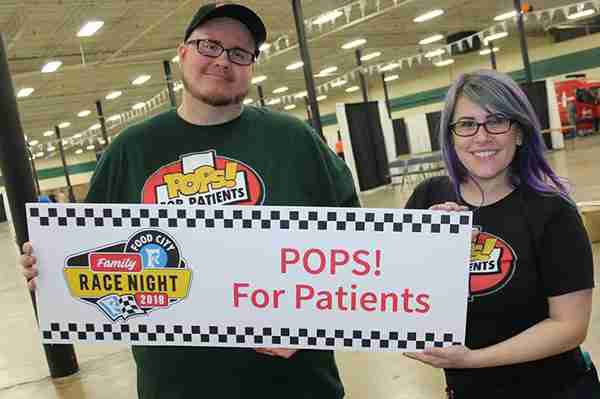 Randy Lee and Krysten Barrera founded POPS! for Patients after their own kids had extended stays in hospitals.

Sometimes you need a little fun to pop into your life to brighten your day. Especially if you’re a child spending a lot of time in the hospital.

That’s what Randy Lee, Co-Founder of POPS! For Patients, figured when he and fellow Co-Founder, Krysten Barrera, came up with the idea for their toy donation cause.  Lee and Barrera had the experience of seeing their own children struggle during extended hospital stays. “We both personally know how sad it is to be stuck in the hospital, so we decided to give back and bring joy to kids in the form of POPS!” he said. “I helped my good friend and fellow P4P team member, Dustin Taylor, with a Toys For Tots benefit show in honor of his son several years ago. It was a great success so I felt extremely confident going into this that we could succeed.” 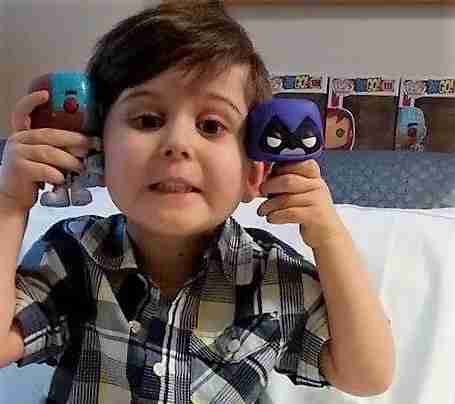 Since August of 2016, they have donated almost 10,000 Pop! figures. That’s ten… thousand in two years! The two had been donating by themselves for a few months before going public with the idea.

Why Funko Pop! figures, specifically? Kids love them, of course. And it shouldn’t surprise anyone to find out Lee is an avid fan and collector of the toys. He doesn’t accumulate them for himself quite as much lately, however. “I’ve been collecting for three years but recently slowed down significantly to focus on having the necessary funds required to attend all of the shows and events we are being invited to lately,” he said. “It’s a trade-off I’m happy to make!”

The toys currently go to whichever hospital the teams in any specific area collect for. “We have hubs all across the world including ones in San Diego, Colorado, New York, Canada, and Brazil. to name a few. And more coming soon!” The Colorado connection has just been strengthened courtesy of hobbyDB. When Rodney Porter from Appleseed Collectibles talked about P4P (as they sometimes refer to), Christian of hobbyDB felt a kindred spirit. “As collectors, we try to avoid growing up sometimes,” he believes. “But it is important to act grown up. What Randy and his team do is fantastic, and we wanted to help by doing what we do best.” So to that end, the two organizations found a way to be a partner in POPS!

Kayla Fuller, of WVLT, Knoxville, joined Krysten Barrera  and Randy Lee to distribute Pop! figures at a hospital in Tennessee.

hobbyDB, a website concerning anything and everything collectible, including vinyl art toys, is a natural fit for such an endeavor. It’s an ever-growing database of every variant of any given toy or collectible, as well as a marketplace for folks to buy and sell. And Pop! figures are a huge part of that model.

“We are so excited about the idea of a private seller-fueled Funko Pop! marketplace that will result in POP! donations. It’s a no-brainer partnership” Here’s how it works: If you’re shopping for POP! figures on hobbyDB, you can visit the POPS! For Patients Marketplace, and part of the proceeds from any purchase will go towards buying figures for the P4P program. It won’t cost you anything extra…. just shop for Pops! 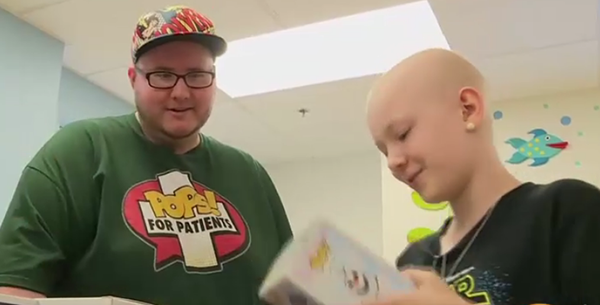 According to Lee, there are other ways to help out as well. You can send them POP! figures in the mail to distribute at two different children’s hospitals in Tennessee. If you want to donate figures directly, they do have a few rules: The characters must be kid-friendly (Sorry, Pennywise, even if you are a clown), and they must be in sealed boxes (for sanitary reasons, not for collector value). Other Funko lines such as Dorbz and Wacky Wobblers are fine as well, as long as they meet these criteria. 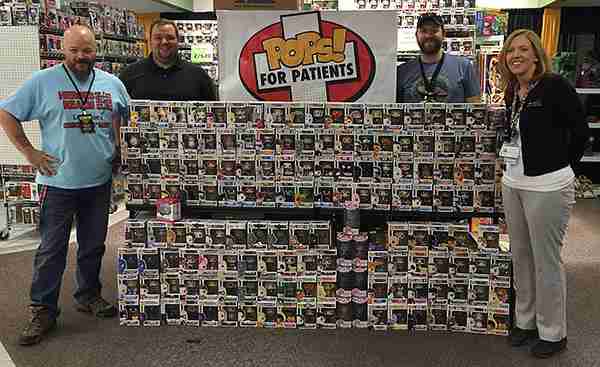 You can also form a team in your area to help them spread the cheer. Details of all the ways you can help are available on their website at www.popsforpatients.org. The P4P team also encourages you to get involved and support your own local Children’s Hospital. They can be contacted at PopsForPatients@gmail.com.

Great idea – thanks, HobbyDB, for partnering with them!  So should it now be H4P4P?  🙂