We’ve been digging through piles of Garbage at hobbyDB headquarters, and we couldn’t be happier about it. Piles of Garbage Pail Kids collectibles, that is.

At hobbyDB, we want to be the go-to place to research and document anything and everything collectible. So even though we started with an emphasis on diecast vehicles (especially Hot Wheels), we’ve been able to dig deep into other areas. And to that end, we’ve finished documenting the GPK cards through OS15 (That’s Original Series 15). The OS cards go through 1988, but won’t be the end of it.

Matt Oldweiler, who runs the GeePeeKay.com website, is crucial to this project. hobbyDB was able to access his extensive (one could say darn near 100 percent complete) list of anything and everything related to the Kids. He has been collecting the cards since 1985 when they first came out. He’s a recent addition to the hobbyDB Advisory Council.

By adding his archive to ours, collectors can cross reference between all kinds of collectibles that fall out of the range of GeePeeKay’s scope.

Andy Goodman has also been instrumental in the project. If his name sounds familiar in hobby circles, he is a big time collector of all kinds of diecast. Turns out he has a thing for Garbage Pail Kids as well. Like many of us, he collects collections.

Chris Wuensch, Data Team Manager at hobbyDB, leads the effort to get the entire GPK line into the database. As it turns out, he’s been an avid collector since he was a kid, too. “I can still remember sitting in the car in the Grand Union parking lot opening my first GPK packs as a kid,” he said. “We’re talking Original Series 1 in 1985. I still have about 75 to 100 cards from those early series. The appeal was through the roof back then, especially for a nine year old. Cabbage Patch Kids were all the rage, so the GPK cards were a nice counter-balance for boys who didn’t want a doll.”

The Garbage Pail Kids began in 1985, as a parody of the enormously popular Cabbage Patch Kids. Despite legal threats from the doll company, Topps was able to continue making the cards, and they have been in and out of production ever since. After a hiatus, the Garbage Pail Kids made a comeback in 2003, and hobbyDB is already at work adding those and the more recent ones to the database as well. 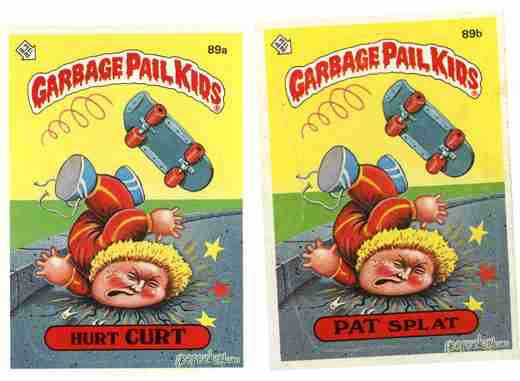 One interesting thing about collecting GPK cards… there are at least two versions of each character card. Topps decided right from the start that there would be a pair of names attached to each illustration, each being an equally terrible pun on the misfortune being shown. So Adam Bomb, who became the brand’s unofficial mascot, is also known as Blasted Billy.  Or sad skateboarder Hurt Curt is also known as Pat Splat.

In most cases, it would seem that one name is no rarer than the other, but there are some unintended exceptions. Double Heather and Schizo Fran were released as part of OS2, a two-headed girl fighting with herself. Advocates for mental health took exception to the term “schizo,” so Topps agreed and changed that one to Fran Fran shortly after. Shizo Fran is one of the rarest of all GPK cards as a result, but since Fran Fran only got a partial print run, she is on the rare side as well.

Even Garbage Pail Kids have reasonable limits on their sense of good taste.

Throw in the fact that some cards were available as glossy or flat, and the number of variants really start to add up. Also, the backs of the cards can differ as well, featuring certificates, puzzle pieces, or other fun bits. Some versions might have a checklist (as a kid, these were boring, but as an adult collector, they are valuable, especially if they haven’t bee unchecked).

The Garbage Pail Kids are a collectible phenomenon that won’t die. And if it did, they would probably make a card of a character commemorating it.

What are your favorite Garbage Pail Kids collectibles? Let us know in the comments!

Where can I go to sell my garbage pail kids cards

Hi Barbara, right here on hobbyDB. Just find them and click on the Sell button (assuming you registered a free account).