Lego has a facility in the Czech Republic where designers are responsible for their really large models that go on tour and on exhibit around the world.. Most of them are static, such as famous buildings from around the world. Then there’s the Lego Bugatti Chiron, a full-size, running, drivable car. And it’s built almost entirely from Lego blocks.

The total number of bricks is said to be around one million pieces. As a rule of thumb, Lego models usually retail for around ten cents per brick, so that would be about a $100,000 set. Considering the real car sells for about $2.4 million, that’s a bargain. Remarkably, almost the entire car is built of Lego pieces. The wheels and tires, of course, are real Bugatti spec.There is also a steel tube frame underneath everything for support. But the interior, including seats, rear view mirror, even the removable steering wheel are all Lego.

As with many Lego creations, you have to use a bit of imagination. There is no window glass, as there aren’t any pieces that will quite fit that size and shape. The bricks are primarily Technic brick, which lock together in more complex ways than the standard stacking bricks. Aside from the missing glass, the contours of the car are recreated rather faithfully. 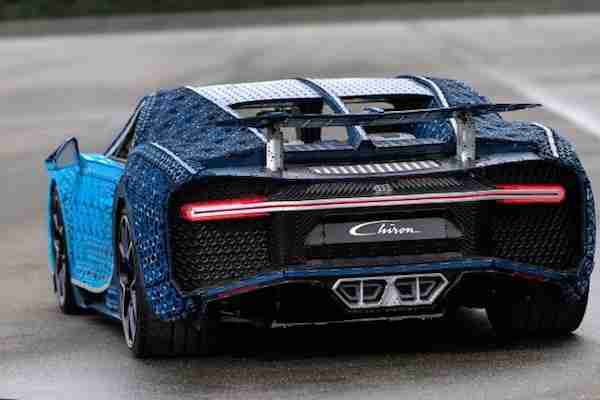 Like any exotic racer, it required intense testing, so it was sent to the Ehra Lessien Proving Grounds to be driven by Bugatti’s own development driver, Andy Wallace. The car tops out at a whopping 19 miles per hour, just a bit shy of the real Chiron’s 261 mph top speed. The engine cranks out 5.3 horsepower (again, a tad short of the real car’s number at 1469). What’s remarkable is that the entire power plant is constructed of tiny Technic Power Function motors, over 2300 of them, connected through a mind boggling array of over 4,000 Technic gears. 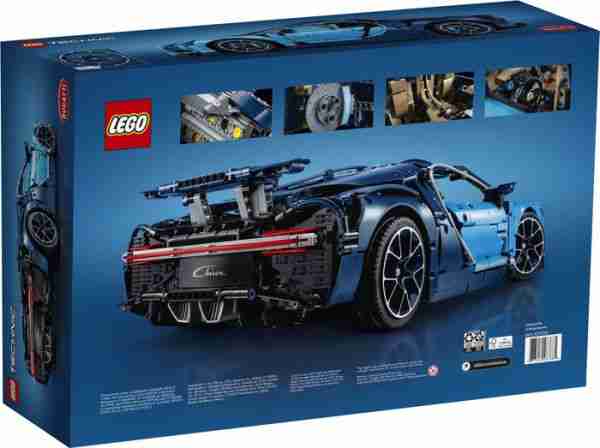 While you likely can’t afford a real Chiron, and this one isn’t even for sale, Lego has you covered in a couple of smaller ways. Set 42083 includes everything needed to create a 1/8 scale Bugatti Chiron. That’s 3599 pieces for  around $349, adhering to that ten cent per brick ratio closely. Despite the smaller size, (it’s still about 22 inches long) the car does feature working suspension, steering, shiftable transmission, and many other amazing parts. The engine block, with cranking pistons, is a work of art unto itself. The instructions even come in the form of a decorative coffee table book, to be displayed along with the model.

If that’s still too rich for your tastes, there’s Set 75878, the Speed Champion Bugatti Chiron. This one is much smaller, built to Minifig scale (and it includes the driver), who can fit inside. It doesn’t quite have the same working features, but at about $15 for 181 pieces, it’s an excellent value. Even at this scale, the distinct contours and two tone livery of the Chiron are unmistakable.

The whole point of Lego toys is dreaming, imagining, and creating. This Bugatti just takes the concept to a whole new scale.