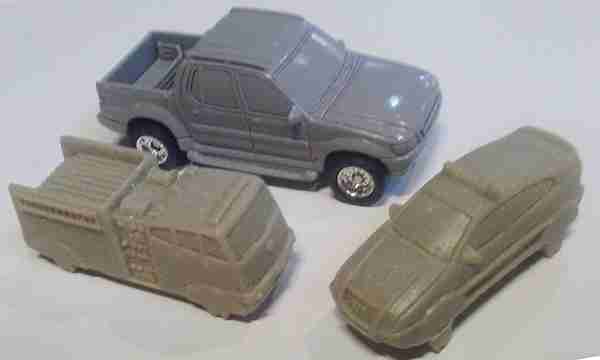 Compared to a standard 1/64 Matchbox truck, these mystery models are tiny.

While digging through our latest stash of Matchbox prototype cars, we discovered models of a couple of tiny vehicles. They were much smaller than the usual Matchbox offerings. Unsure of what they were, we started sleuthing around. We asked our trio of former Matchbox designers for insight: Rob Romash, Matchbox Master Model Maker; Steve Moye, Matchbox Designer; and Glenn Hubing, Matchbox Model Painter.

As it turns out, these were two concepts for a Mini Matchbox sub-brand. Galoob’s Micro Machines were immensely popular throughout the ‘90s, spawning playsets and carrying cases. In fact for a few years, they outsold Hot Wheels, Matchbox and Majorette… combined. So it made sense for Mattel to tap into the tiny car market. In the early 2000s, Matchbox explored the idea, commissioning some unlicensed, futuristic tiny vehicles. The two designs you see here are among the few they worked on but ultimately never produced. 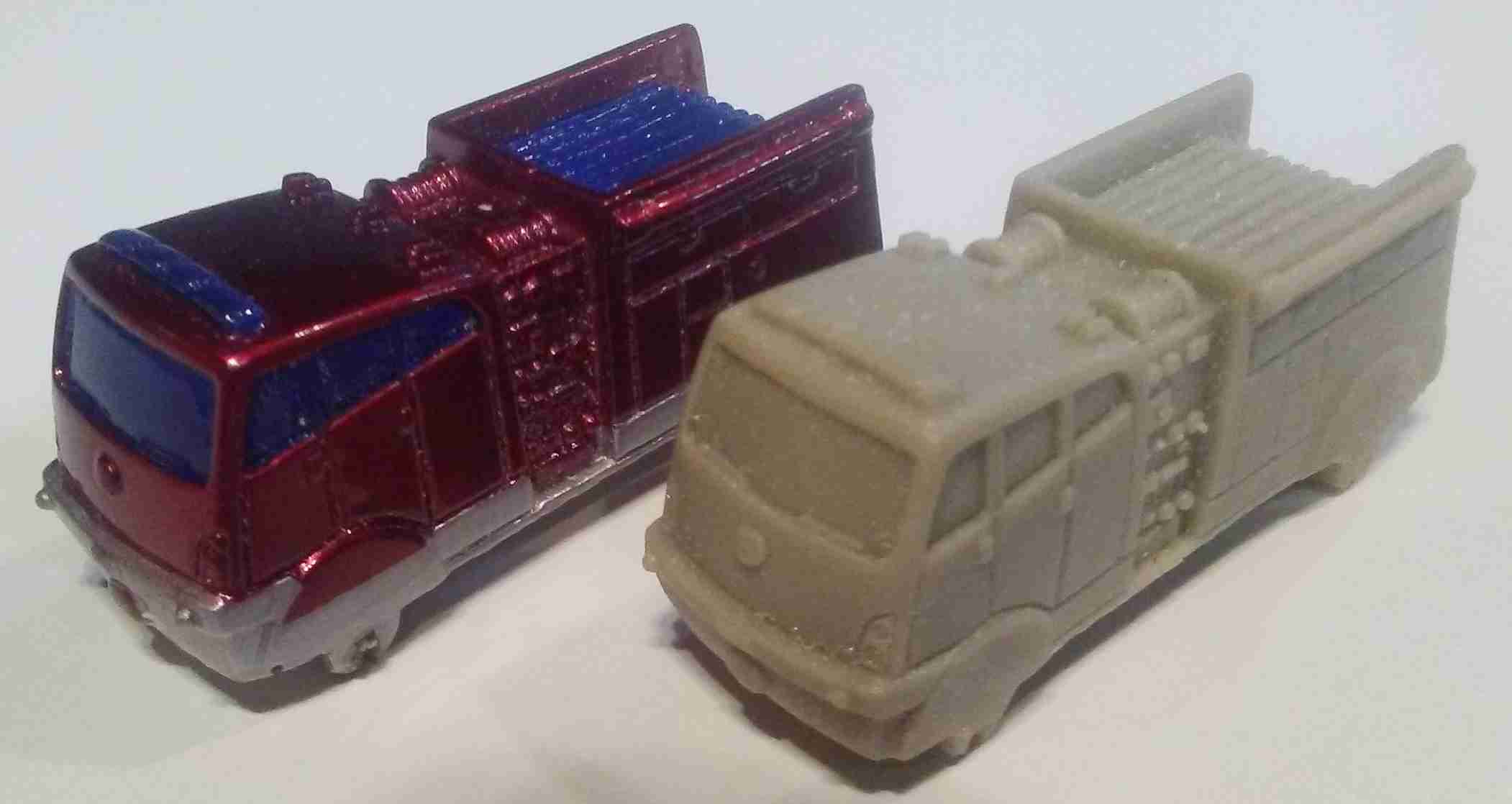 There are painted and unpainted castings of the fire engine.

The two vehicles are a police car and a fire engine, a pair of can’t-miss tropes for toy cars. Each one appears in two stages of the prototype process: A plain, early resin casting, and a highly detailed painted version. In all likelihood, due to the scale, the cars were designed to be molded as a single piece body with the windows painted instead of being separate clear pieces. 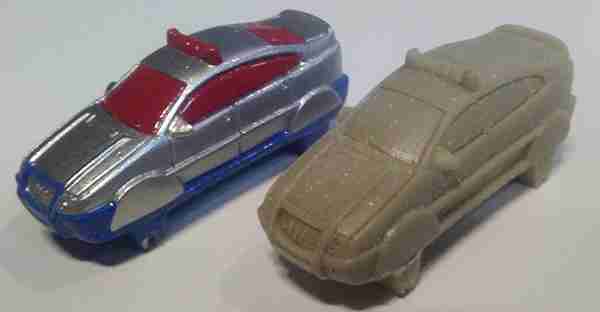 The collection features painted and unpainted castings of the police car, too.

A couple of things stand out on these designs. First, while much smaller than a typical 1/64 vehicle, they are bigger than the standard Micro Machines car (2.75 inches long vs. 2 inches). The fire engine actually comes close to the Micros trucks size, but the police car is huge by comparison to their cars. Second, they sit up pretty high. The mounts for the axles are below the rest of the chassis, so the finished cars would ride like a monster truck or a donk. Also, there are no cutouts in the fenders to allow the wheels to recess into the body, so they would sit completely outside or the body work.

Compared to Micro Machines cars, the Mini Matchbox cars were sort of big.

It’s possible the final designs were supposed to have the wheels situated a bit closer to the mass of the car, but since these are painted prototypes, it seems the shape is close to the what was intended for production. Sadly, we may never know the full intent of the designs. 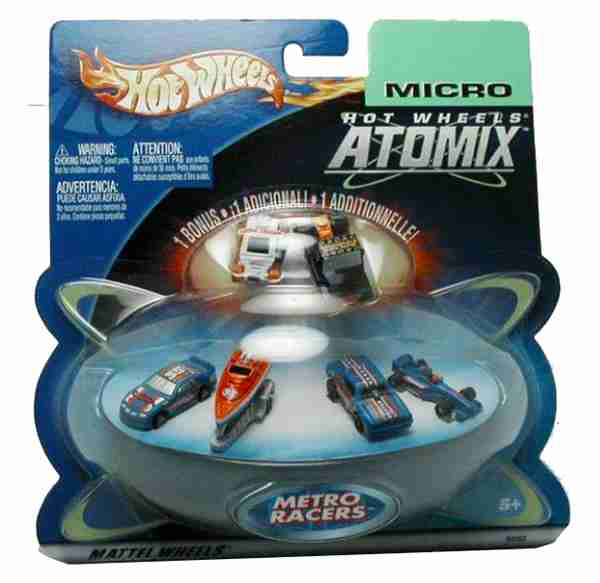 Meanwhile, Hot Wheels produced the Atomix series of cars, close in size to the Micro Machines. The first ones came packaged as a bonus vehicle on some 2002 mainline cars. The early designs were based on existing Hot Wheels cars such as the Deora II and the Snake and Mongoose funny cars (which even featured flip up bodies!) They were eventually released in sets, of usually five or so vehicles.

Playmates’ Speedeez cars were Micro Machine sized but had ball bearings for speed. They also had large scale models that folded out into crazy playsets.

For some reason, when Hasbro acquired the Micro Machines brand, they dropped the ball on it, allowing it to more or less disappear (aside from licensed sets such as the Star Wars sets). In fact, all the brands of micro sized cars (such as Speedeez by Playmates Toys) pretty much vanished by the mid 2000s. But why?

The cars sold well, but displaying a collection was tricky. The cars themselves were tiny, but the packaging was huge by comparison, since they usually sold in sets of 5 or 10 cars. But the most obvious answer is that the cars were tiny enough to be considered choking hazards. It doesn’t seem like there was an epidemic of kids eating tiny cars, but it probably wasn’t worth the potential legal headache. For Matchbox, it was over before it began.

Whatever the reason for the quick end of the Micro cars, if you’re a serious collector, you might want to grab these very rare examples. Yep, they’re for sale in the hobbyDB Marketplace! They might fill a big hole you never knew was in your collection.

In this context it should be mentioned that already before the Mattel takeover, Matchbox produced two ranges of smaller model cars: “Superfast Minis” and “World’s Smallest Matchbox”. They did not last very long, only from 1990 to 1992 approximately, so they probably were not overly successful. 1992 was the year when Matchbox ownership passed from Universal to Tyco, so it seems Tyco was not interested in continuing those ranges.