For Halloween, You’re Gonna Need an Ambulance or Hearse

Halloween is a holiday associated with walking, specifically around the neighborhood seeking candy from neighbors. But if you need to drive on that date, there’s only one choice. Well, two actually: ambulance or hearse.

Both vehicles connote a kind of morbidity… one posthumously, one, umm… pre-posthumously? Humously? The point is, death, gore, all kinds of spooky stuff are easily associated with those vehicles, and even though they aren’t technically Halloween oriented, they fit right in.

Let’s be more specific, though… we’re talking about car-based versions of these transports, not vans or other bespoke vehicles. Back in the day, coach building companies took standard sedans, stretched the wheelbase, extended the windshield upward, and added a long roof to create the basis for hearses and ambulances. There’s something kind of, well, ostentatious about a Cadillac hauling you to the hospital when a Chevrolet would do just fine. On the other hand, a Caddy hearse exudes a necessary touch of dignity and class to your final ride to the grave.

So, something about a vintage Caddy with curtains in the back just speaks to this holiday. There have been numerous models of these car-based body haulers built over the years, but let’s focus on 1/64 versions.

Matchbox has offered a number of ambulances of all types in all their scales, often with removable stretchers and other goodies. When the early Benz “Binz” cars upgraded to SuperFast wheels, it was righteous fun. In the U.S., Caddy is far and away the leader in the hearse business. And they have been for a really long time. The long wheelbase helps, but really, any car can be modified into a hearse. Matchbox has since gone on to create various other models, mostly mid 1960s Cadillac based cars. 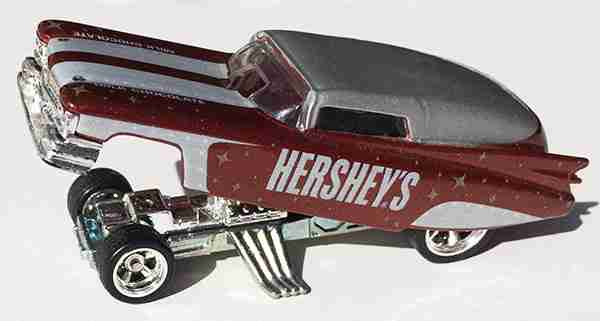 Hot Wheels has gotten into the Hot Hearse business as well, with the understatedly named ’59 Cadillac Funny Car casting. This thing is heavy, has a flip up body, and that’s all you need to know. And the 100% Hot Wheels Line also included a less souped-up 1963 Caddy hearse in several colors.

On a side note, there is also a Hot Wheels Custom ’53 Cadillac that looks like an El Camino’d coupe with a soap box derby car in the back. This is actually based on the old flower cars that used to be part of a funeral procession, so, yeah, that kinda counts.

Oh, did you think we forgot about Ecto-1 from Ghostbusters? Fun fact: The car used for the Ecto-1 was not a hearse, but an ambulance. In the original movie you actually get to see it briefly in gray primer, and honestly… it might be more awesome in that livery. The recent remake used a 1980s Caddy, which worked a lot better than it sounds on paper. Hot Wheels has them covered in multiple scales, even.

Of course, the greatest movie hearse of all time is Harold Chasen’s custom E-Type Jaguar hearse from Harold and Maude. There are a few larger scale models available, but 1/64-ish cars are hard to come by. Many folks have customized them over the years, like the Aurora ThunderJet slot car above. It’s the way Harold would do it, of course.

Johnny Lightning has had some fun with hot rod hearses based on larger scale models. The dual engine Haulin’ Hearse dragster and the stately (even in lavender with flowers) Heavenly Hearse surf wagon were both based on kits made by Jo-Han.

Even more fun was the Meat Wagon, a customized 1937 Packard Ambulance, based on a plastic kit by Aurora. This model also came decorated in honor of Alfred Hitchcock’s Vertigo and a few other schemes. All of the smaller JL models were available in other livery (or should that be dead-ery?).

Of course, they did a version of the Ecto-1 and repurposed that casting with surf boards. Heck, the folks at Playing Mantis would stick surfboards on just about anything given the chance. And there was even a 1957 Chevy Bel Air  hearse. Remember what I said earlier about being driven to the grave in a Chevy? I take it back, that would be pretty cool.

Zylmex had an interesting ambulance model in the late 1970s. Detail is crude, but it appears to be a 1953 Chevy. It came decorated in olive drab with M*A*S*H decals. It was part of a series of toys and playsets from the TV show. What’s not to like there?

There are also a lot of sedan delivery or panel wagon models of all kinds that would make excellent hearses and ambulances, with or without surfboards, but let’s not beat this topic to death. Can you think of any 1/64 models we didn’t include here? Let us know in the comments six feet below.