The Evolution of Lego Minifigs, Brick by Brick

Lego is celebrating the 40th anniversary of the the Minifigure this year, but the history of block-based humans goes back further than that. So let’s take a look at The Evolution of Lego Minifigs (and their blocks in general) over the last 50 or so years.

The first Lego building sets were designed to build, well, buildings. Vehicles weren’t something that needed to be constructed, because Lego originally made separate, somewhat realistic cars and trucks to go with these sets. Those vehicles were eventually discontinued, so eventually the first wheel sets were added, allowing kids to build cars and trucks. But it would take several more years (and a change in scale) to bring about anyone to drive those vehicles.

Lego’s’s first wheel and tire pieces had a 2×2 stud arrangement in the middle of the hub. A human figure scaled to that size would need to be about 4 inches tall. Those would probably be too big and require too many new parts, so Lego balked at the idea at the time. They offered head and shoulder pieces with moveable arms, but the rest had to be built from regular bricks.

The first Lego Minifigs appeared in 1975, along with smaller wheelsets. This was from the days when Lego blocks came only in black, white, red, yellow, and blue. And green baseplates. And clear window bricks. And a few gray pieces, but only technical ones like wheel mount blocks. (Okay, they actually had quite a few different colors going on back then.) And just like that, the Lego universe was dominated by a scale somewhere around 1/48.

Oh, and they weren’t officially called Minifigures yet. But we’ll go with that term for now.

The original Minifig head shape was a bit of a departure for Lego, as round pieces were not part of the universe yet aside from wheels. Also, the diameter of the head was a bit wider than a single stud brick, so it couldn’t be used in certain tight areas. But the shape and size just seemed right, so it stuck. The body had no moving parts, so fitting a character into a car wasn’t really even a consideration. Most of the time, adding a passenger meant just setting aside the legs and installing the torso and head. Some new bespoke pieces included a police hat, a farmer’s hat, and a bit later, simple male and female hair pieces. 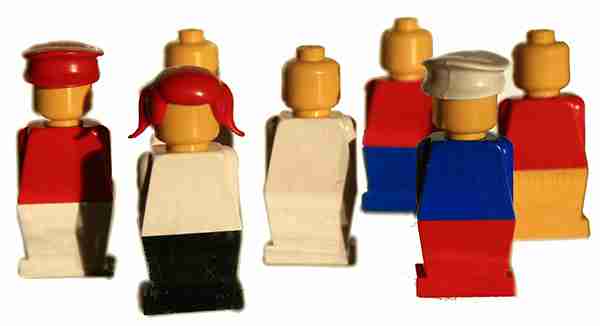 Another feature lacking in Lego blocks at the time: There were no graphics printed on any of them. Some sets came with stickers, but permanent markings were years away. So that meant blank head pieces at first.

The heads did come with a new feature that was fraught with possibility. The diameter of the neck was perfect for nesting in the middle of of a 2×2 array of studs, meaning it could be centered in a way that threw the entire grid into a new dimension. That may be overstating things a bit, but soon after those pieces came out, smaller cylindrical parts debuted that had the same feature. Coupled with the happy accident that a 1/3 thickness plate could stand on edge between the studs, suddenly the world of Lego was pointing in all kinds of new directions.

1978 brought a major evolutionary step in the Minifig. Moving arms and legs, as well as printed features including faces. Early ones had only one expression, a simple, noseless happy face. And they were yellow.  (Different facial features would not appear until 1989 with the first Pirate sets, and eventually, heads with faces on the front and back would become the norm.)

The legs fit the same dimensions as the early non-moving ones, but the torsos were now wider, as the arms stuck out from the width of the body. While we’ve become accustomed to this style, it did lead to some changes in the engineering of Lego kits. If you’ve noticed how real cars are getting bigger and bigger (along with the average real person), it’s happening in Legoland, too.

Vehicles, previously 4 studs wide at this scale, suddenly became six or eight studs wide. And that was to accommodate a single, centrally seated passenger. For them to sit side by side required space between the seats, as well as space on the sides.

1979 saw possibly the most important development in Lego history… the introduction of Lego Space sets. These featured new wing shapes in several sizes, new clear canopy parts (even molded in translucent colors!) and cylindrical and cone pieces. And a lot more gray bits. The characters now had a spiffy space helmet option and back mounted air tanks. (The tanks attached by being placed on the neck before the head went on, making the space people just a bit taller.) Sales rocketed to new heights, and kids fell in love with the new parts.

For several years, the yellow brick head and hands remained the standard. The folks at Lego liked the idea that even though only one skin tone existed, it really didn’t match any actual human hue, so in a sense they represented everyone and anyone. It also meant characters who wore yellow looked sort of naked.

Around the turn of the century, Lego was struggling financially. Their toys were immensely popular and beloved, but costs were spiraling out of control. In order to keep up the precise, durable quality of the brand, they had to raise prices just enough to become an issue with consumers. Also, there were some issues with protecting the copyrights on their designs, so competitors popped up, some with lower prices, most with lower quality.

Then came the first licensed sets. And despite the extra cost for the licensing rights, they were a huge hit. Instead of generic characters, buildings, and cars, these sets represented real fictional characters (if that makes sense). 1999 saw the first Star Wars sets, and more evolution came about. While the bodies mostly remained the same shape and size, new helmets and hair were introduced. And for some of the monsters, new molds were created, with head shapes almost completely devoid of lego simplicity. A shorter leg piece was introduced for the Yoda figure. And in 2003, for the first time, more realistic skin tones were used. By then, the color palette for other bricks had exploded into the dozens, so this didn’t seem too earth or space shattering.

Lego managed to right the financial ship by creating their own new original universes that didn’t require any additional licensing fees. The Ninjago series, introduced in 2011 has been one of their most popular lines ever. And best of all, it brought back the traditional yellow skin tones. Throw in the success of The Lego Movie and other assorted video game and entertainment properties, and the company is brick solid again.

The Lego Miniverse is now filled with thousands of different Minifigs of all shapes, sizes and colors. Superheroes (DC, Marvel and Pixar), Pirates (Caribbean and otherwise), wizards, and all sorts of movie and TV tie-ins can peacefully coexist in one toybox. Most licensed Minifigs now go with an approximation of the character’s skin tone, but there has been a notable recent exception. 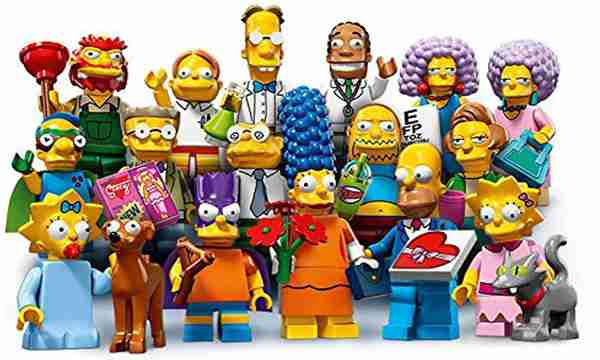 The whole bricktone thing was all brought home with the first Simpsons set in 2014. While each character had distinctly molded heads, most of them were once again yellow, which in a way, makes them the most Lego-y of all characters.

What is your favorite Lego Minifig? Let us know in the comments!