Cartoonist, Writer, Collaborator: What I Learned From Stan Lee

The world of comics and pop culture in general lost a titan this week when Stan Lee, the biggest driving force behind Marvel Comics, died at the age of 95. His impact on comic book fans can’t be measured. Neither can his impact on comics creators.

Lee started with a company called Timely Comics in 1939, working mostly with largely forgotten kids fare. The publisher struck gold with their Captain America stories but didn’t do much to expand the concept. By the early 1960s, however, Timely rebranded as Marvel Comics and Lee was tapped to begin crafting a new world of allies for Cap, as well as competitors for DC’s superheroes who had been off and running (and flying and teleporting) for a couple of decades.

His first creation was The Fantastic Four, which was an immediate hit with readers. Within a few years, Hulk, Iron Man, and of course, his biggest success, Spider-Man were spinning tales of adventure of their own.

As a cartoonist myself, (insert shameless plug here), Stan Lee surprisingly wasn’t an early influence on me. See, my Grandmother worked for Western Publishing, whose Gold Key comic books included titles from Disney, Looney Tunes, DePatie-Freleng, and Walter Lantz. So that’s what I grew up on. They weren’t Marvel or DC comics, and aside from Super Goof, they didn’t include any superheroes. So I started drawing in the vein of those Gold Key titles. All by myself.

And there was Charles Schulz, whose “Peanuts” comic strip was in its creative heyday. Schulz famously said “If I were a better artist, I’d be a painter, and if I were a better writer, I’d write books — but I’m not, so I draw cartoons!” Made total sense to me. If I were ever going to make it in this business, I would probably have to go it alone. I gravitated towards becoming a newspaper comic strip artist, writing and drawing short, snappy jokes, often in the framework of a longer tale. But still a solo venture.

As I got a bit older and MAD magazine seemed less inappropriate (is MAD ever really appropriate at any age?), the idea of separate writers and artists began to appeal to me. But could someone really be a “cartoonist” if they only did one part of that equation? Did it matter if the end result was enjoyable to the reader?

So in a similar vein, I finally started to appreciate Stan Lee a bit later, in college, as I began collaborating with other creative types on class projects. Lee was primarily the writer of the ideas but was still considered still a “cartoonist” in the fullest sense. Would Jack Kirby or Steve Ditko have ever drawn those dynamic action panels of The Thing if Lee didn’t feed them the idea, the character, the inspiration? Would those ideas sear such vivid memories without their action-packed art?

Suddenly, for me, the Charles Schulz approach had some competition as a way to do comics. If a solo cartoonist could crank out 7 pages a week, a writer and artist could crank out 14 together. Same amount of work for each, just divvied up differently. And a lot less lonely.

Stan Lee was supposed to be the keynote guest at the 2013 Denver Comic-Con but had to withdraw at the last minute. Fans were disappointed, and for many, this felt kind of urgent. It seemed like he was getting up there in years and might not be able to make it to a future Con, due to the inevitability of declining health or worse. We all wondered if we would ever get the chance to meet him.

But he came to Denver in 2016, and all was right with the world of superhero fandom.

I was at that Con, but didn’t get to meet him. As a cartoonist with a table full of books to sell, I couldn’t afford to step away for a few hours to stand in line for a photo, an autograph, and a brief word. As a cartoonist who was inspired by Lee, I regret missing the opportunity. 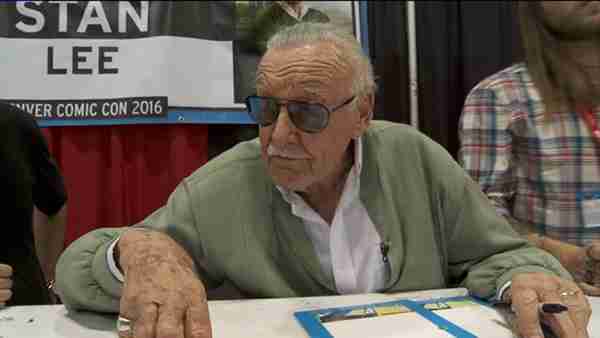 These days, it almost feels like actual comic books are a by-product of the Marvel Entertainment machine. And yet comic book stores are full of fans and readers hotly debating the latest developments in new artists or writers being assigned to a particular title and whether a certain pairing worked well. Stan Lee probably would enjoy being there, watching comics being discussed as such important fare.

Both of my nephews credit Stan Lee, not their schools, with teaching them how to read and certainly inspiring them to do more creative work such as videos and films.

I agree… I learned a lot of really great vocabulary from those old comics. And a lot of snotty things to say from MAD.