Over the past few years, we’ve contributed articles to Die CastX magazine for publication on their website and in their quarterly print edition. Here’s the story of one of the coolest cars ever from Mercury.

For many years of its existence, Mercury was a brand in search of the right identity within Ford Motor Company. The late ‘40s finally found a spot as the slightly cooler, tad more performance-oriented, bit more expensive option to base Ford models. But when the Ford Mustang was introduced in 1964, it (and the freshly redesigned Thunderbird) kind of squeezed Mercury out of that spot. 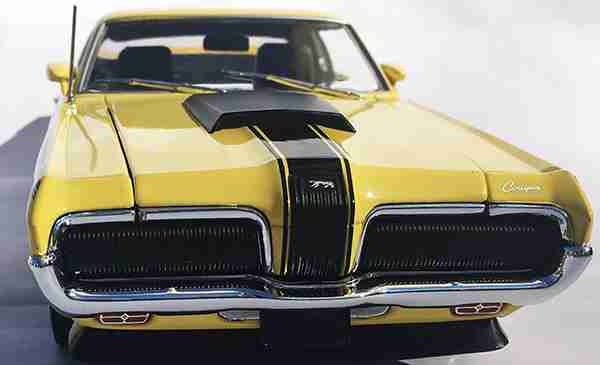 So when the Mustang got its first redesign in 1967, Merc got anew  car based on the same platform. Price and image wise, it fit in between the ‘Stang and the ’Bird, and became sort of a flagship for the marque. Designers did a remarkable job disguising its Mustang roots. But as those Mustangs got more powerful with its Mach and Boss models, the Cougar needed an upgrade to make sense. 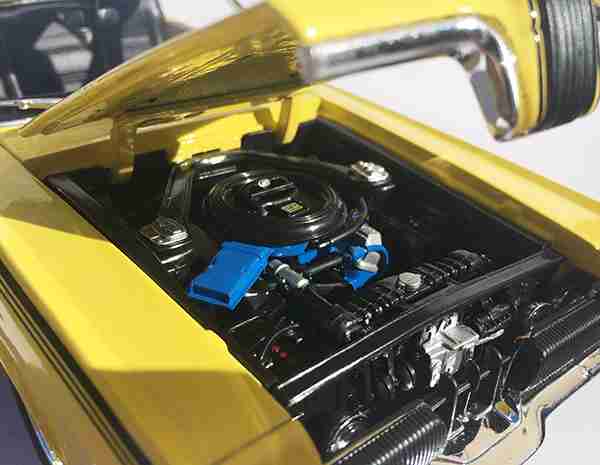 Enter the Eliminator package. With a 351 engine (it slotted nicely between the 302 and 428), it was a civilized, worthy alternative to other more brutish muscle cars. Sales numbers never came close to its Ford counterpart, but that was never really the intention. Mercury was cool again.

In the diecast world, the production discrepancy is even greater. There are countless Mustang models in every scale, but very few Cougars, and even fewer Eliminators. Welly made a really sharp 1/18 version of the 1970 Eliminator, a real rarity for that size.

The exterior follows the Cougar’s unique lines faithfully, including the blackout grill split by a third, protruding middle grille. There isn’t a lot of chrome to reproduce, as the original had a very stark, sporty look. The rally stripes from that nose and down the sides are crisp and cleanly done. And if the hood scoop looks kind of plastic-y, well, it actually matches the real thing in texture and material. The wide bank of taillights look sharp with a wash of red over chrome. You can almost see the “Eat At Joe’s” sequence blinking from the turn signals. The side marker lights are well done too, recessed into the fenders with separate chrome and lenses.

The chassis features working steering and suspension. Blackout wheels look plain but aside from needing a dot of paint on the lugnuts and some center caps, they are actually correct. The engine bay has a lot more detail than you might expect from Welly, with more parts in more colors than usual. 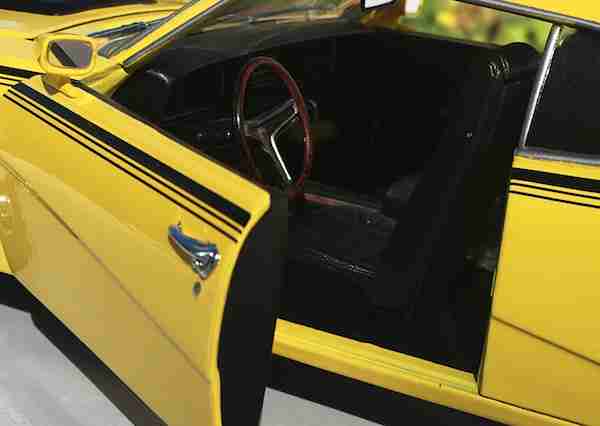 Interior detail includes lots of painted “wood” accents, which brighten up the otherwise solid black surroundings. The rest of the cabin looks appropriately sparse and purposeful.

By 1971, fuel economy needs and other regulations squeezed most of the performance out of American cars. The Cougar left its Mustang roots behind and became more of a bloated cruiser. The new version sold better (go figure) but over time hasn’t captured the hearts of collectors like those first generation models. Welly’s model recreates one of the last gasps of cool from the Mercury nameplate.