One of the greatest, most mysterious super-spies in history is hitting his busy season. He’s been surveying you and everyone in the world ’round the clock, ’round the calendar. He’s been compiling notes on everyone’s behavior in order to exact his own special brand of justice. But on Christmas Eve, Santa Claus rolls up his sleeves and really gets down to business.

As Christmas approaches, he has a network of “helpers,” doppelgangers who pop up at malls and shopping centers and street corners all over the world in December to give the illusion that he’s close by. Of course, some of those Alt-Santas have other motives, many of them quite naughty indeed. Here at hobbyDB, we decided to compile a list of Santa’s subterfugers (is that a word?) from the benign to the sinister to the positively evil. And of course, we have our own intel on each one.

There is a long history of fictional characters donning the red suit mostly for good natured hijinks, or simply to sit in the chair at the mall. Generally affable characters such as Yoda, Mickey Mouse, and Freddy Funko have all gone red for non-canonical merchandising reasons. Which really fits the spirit of Christmas if you think about it. Heck, even Darth Vader can be found in Santa garb, but since it’s not in any of the movies, we have to assume he was just goofing around, right? 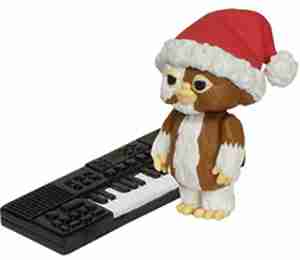 Anyone who doesn’t think of “Gremlins” as a Christmas movie really needs to have their spirit checked. The Gremlins start out cuddly, but (Spoiler alert for a 35 year old movie) if they get wet, or are fed after midnight, they turn into horrifying little monsters. So it’s tough to say which side of the fence Gizmo, seen here, falls on. Also, is he really impersonating Santa, or just wearing a hat to be festive? Intentions and consequences unclear. 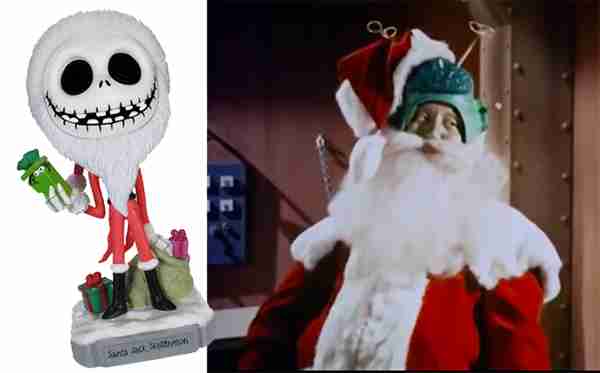 Jack Skellington has to go here, right? Sure, he plotted to take over Christmas, and sure, he usurped the good name and costume of St. Nick, and sure, he actually hijacked the sled (Spoiler Alert for a 25 year old cartoon) and attempted to deliver the goods on his own… but he swears it was all in good fun. Okay, and a bit of jealousy. However you want to judge his intentions, he probably could have done some jail time for his malfeasance if he ever went to court. 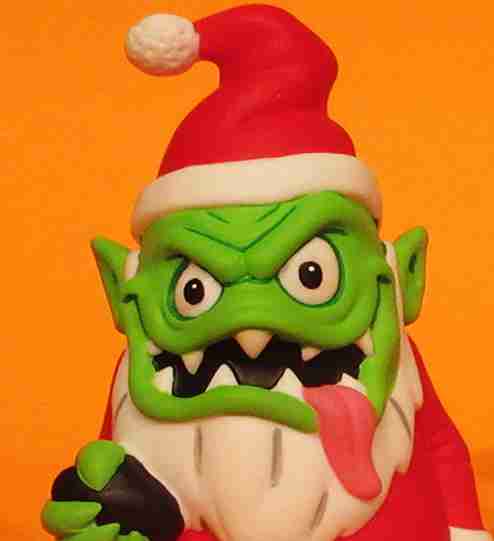 Also in this category, we have Droppo, the lovable goofball from Santa Claus Conquers the Martians, possibly one of the worst holiday movies ever. In any event, Droppo dons the suit to cover for Santa while he… look, I don’t want to spoil this one for you. You really should watch the Mystery Science Theater 3000 version of it, though.

“Looks Kind of Scary, but Who Knows?

Psycho Santa’s main motive is… well, that’s hard to say. He’s a crazy goblin-looking creature, with wily eyes, a mischievous grin, and a creepy tongue dangling out of his gap toothed mouth. The Psycho Goblin character is an original Funko creation, so he’s still building his back story.

Your heart’s an empty hole, Your brain is full of spiders, You’ve got garlic in your soul

And of course, Santa’s most sinister imposter has to be the Grinch, right? His elaborate scheme to steal the spirit of Christmas by stealing the materialism of the holiday was diabolical. He didn’t just wear the suit, he mimicked the sled, the reindeer, the mannerisms. And of course, (Spoiler alert for a 50-year old cartoon) his diabolical plot could only be derailed by… his own heart. Now for a real mystery… in Who-ville, does the real Santa look human, or Who-man? 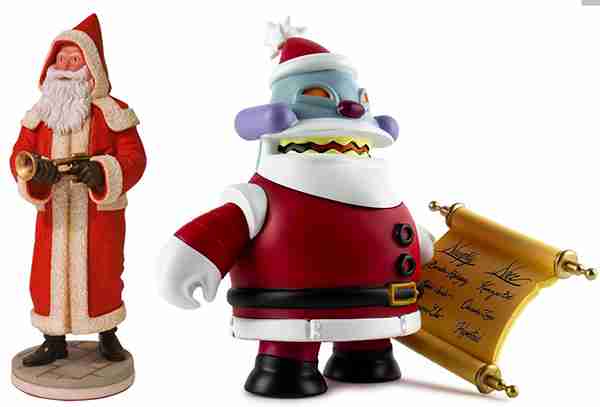 What if Santa is some kind of Robot?

Oh, wait, you thought the Grinch was the best of the worst? In the year 3000, Santa’s duties are relegated to a harmless four-ton robot from Neptune. Well, Futurama’s Robot Santa Claus would be harmless, except he was erroneously programmed to judge the naughty from the nice with extreme prejudice. (Spoiler Alert for a 20 year old cartoon) He deems just about everyone naughty and worthy of a death sentence.

Speaking of robotic Santas, over the years, “Doctor Who” has ended many of their seasons with a Christmas special, some of them featuring Santa.  It makes sense: He doesn’t hop across dimensions, and he doesn’t travel in time, but Santa does manage to cover a heck of a lot of square miles in an absurdly short amount of time. So it figures he would know Doctor Who to some degree. But he’s the good guy. In most of those specials, anyway. One year did feature a super creepy Santa Robot, the kind who occupied the uncanny valley, so he was the stuff of nightmares. 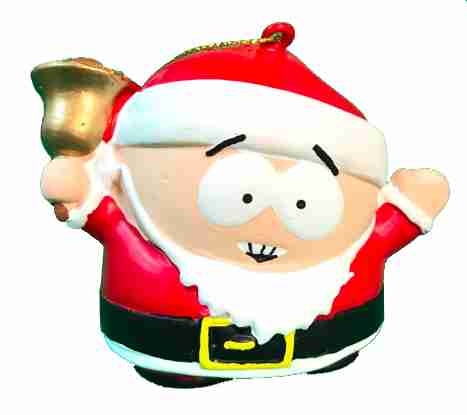 The True Meaning of Christmas is Ham… no, Presents!

The very first five-minute South Park cartoon features Santa Claus battling Jesus to settle the true meaning of Christmas. As bad as that Santa might sound, (and in subsequent appearances he’s not the nicest guy) he’s not an imposter, so he doesn’t really count for this list. On the other hand, Eric Cartman has been spotted in a full Santa suit several times over the years. Whatever his specific motive might be at any time, we can assume that Cartman Claus must be the most truly evil imposter of all.

Regardless of intent, it’s clear that the spirit of Christmas lives inside all of us. So merry Christmas to all and to all… make sure you look closely at who actually slides down your chimney this year.

Do you have a favorite undercover Santa Costumed character? Let us know in the comments below!