The Hot Wheels 50th Anniversary celebrated half a century of the world’s most popular toy cars in 2018 with a year-long blowout. As the calendar flips to 2019, let’s look back at some of the highlights.

First for a sense of scale, consider what Hot Wheels did in 1993. In that pre-internet, pre-everything-is-collectible era, the Hot Wheels 25th Anniversary caught many fans by surprise. If you happened to be scanning the pegs for new cars, you might have been stopped in your tracks by the once-familiar red and orange flamed packages with the Hot Wheels logo. The wide custom cut card art, the button (reproduced in plastic) and the brightly colored cars were an instant time machine to the late 60s and early 70s remembered so fondly by kids of that era.

It’s almost cute how subtle the whole thing was. Original 16? No, Mattel only dragged out eight molds from the past. Heck, they may have even been caught off guard at how popular these would be, as the next year, “Vintage Series II” was released with eight more early favorites.

And that was pretty much it. Hot Wheels did a few commemorations for their 35th and 40th birthdays, but those numbers aren’t as magnificent as the big 5-0.

2018 started off kind of subtle, with the new “50” logo on all the packaging for new models and old. Not a huge deal, actually, although it set up some packaging variants to keep track of. In fact, the really special merchandise kind of just trickled out at first. Lionel surprised collectors with an elaborately decorated Hot Wheels-themed train set (complete with orange track!). It’s a really nicely done set, but that wasn’t quite what fans were expecting. 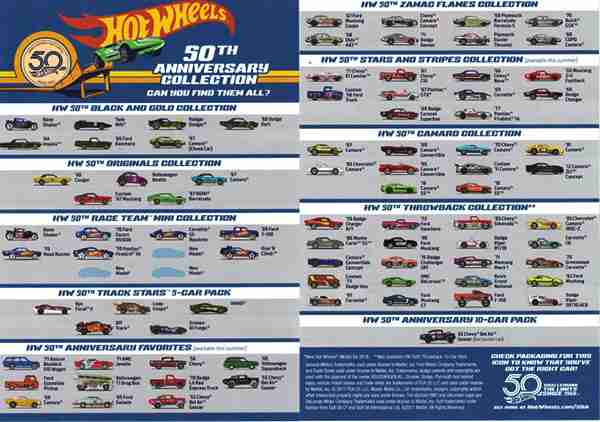 The first 50th cars arrived early in the year, the “Black and Gold” series, a set of seven castings from various eras (six plus a mystery Treasure Hunt). If you hadn’t been paying attention to signals from the various insider clubs and rumor mills, that almost seemed like that was going to be the whole shebang.

Shortly after those cars came out, however, a little flyer arrived… a tear sheet available next to the store displays, outlining the rest of the commemorative models. A lot of them. Suddenly, it was game on!

“Stars and Stripes,” “Zamac Flames,” and blue “Race Team” themes were all on the way, but some more “commemorative” lines were also promised. The 20 car “Throwback Collection” featured a mix of old and new castings. One interesting trend was that most of the celebration focused on models based on real cars, with only a few unlicensed, original, fantasy designs to be seen.

The “Originals” Series was kind of an odd mix… the late ’60s flamed card art, plus Spoilers-era cartoon illustrations of the cars, plus… well the castings were interesting.  They included a VW Beetle, a ‘Cuda, a Camaro, a Cougar, and a Mustang, staples of the original 16. But not the original castings: these were versions of later models. For the price, the overall effect was neat, but kind of a near miss for some collectors. (A few years ago, on the other hand, the RedLine Club did a much more accurate tribute by re-releasing castings of all of the “Original 16” cars. They even got the wheels right, with the covered center hubs. And the packaging was a much closer replica, as real as you could get without causing authenticity questions. More on these in a bit…)

The History Channel broadcast a one hour History of Hot Wheels in the summer. It was fun to watch, but it zoomed down the orange track too quickly. August brought about another amazing retrospective history of the brand in a more permanent form. The book “From 0 to 50 at 1:64 Scale” by Kris Palmer featured colorful layouts, terrific photography great sidelights, and an intro by Larry Wood (it was a big year for him and the other historic designers). Oh, and it came packaged in a vinyl carrying case that looked and smelled like 1970!

Speaking of good reading, Jim Garbaczewski teamed up with hobbyDB to publish the latest Hot Wheels Casting and Price Guide this past Spring. With 228 pages of details and 3,300 color photos, it’s as accurate and complete a listing of castings as you can get.

September brought possibly the most welcome surprise of the anniversary… Hot Wheels postage stamps! Ten designs featuring cars from the original Twin Mill to 2018’s Mach Speeder made the mail flow just a bit faster. (How many of you used them on your holiday cards this year?)

The conventions had a more celebratory feeling than usual too. The 18th Annual Collectors Nationals debuted a VW T-2 Rockster, a new casting that is sure to be popular among premium offerings for years to come. The 32nd Collectors Convention got into the spirit of things with an outstanding array of amazingly detailed paint schemes on the convention cars, including early castings of ’65 Mercury Cyclone of the new Dragstrip Demons gassers. 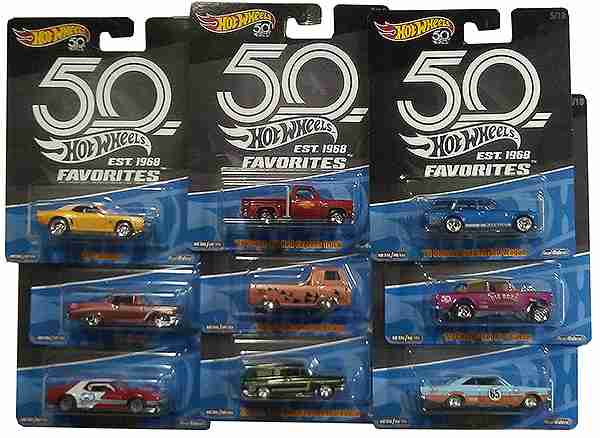 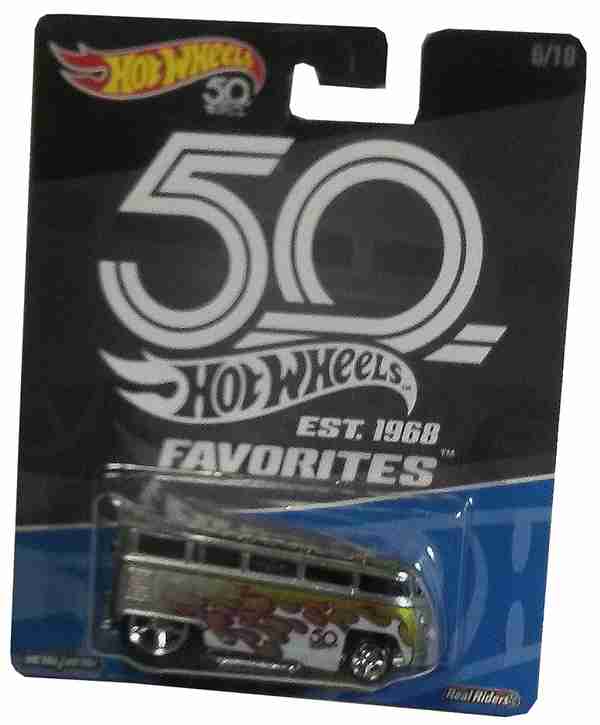 Fall brought the 10 car “Favorites” series to stores. Sharp black cards stood out among the rest of the offerings, with colorful, Real Rider-adorned, metal-chassis cars. And what a selection it was. The Drag Samba Bus, the ’55 Chevy Gasser, and the ’67 Camaro anchored a wide variety of vehicles from different marques. They were kind of hard to find, but not impossible, making the hunt challenging and fun, but not over the top.

Then came one final present… a very limited edition replica of the Original Hot Wheels Store Display that kicked things off in 1968. This large cardboard unit included another round of repops of the original 16 in Spectraflame hues. Since it was limited to 1,500 pieces, it has sold briskly. Even at $500, it was worth it almost for the cars alone. 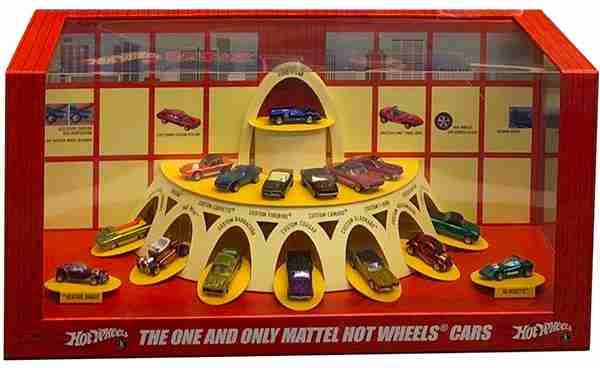 Throughout 2018, Mattel did an amazing job rekindling some of the memories that today’s collectors felt as kids. The celebration was downright fun, which is what made Hot Wheels an instant success from the start.

What was your favorite part of the Hot Wheels 50th Anniversary? Let us know in the comments below.

I am a little bit biased but my fav was Jim Garbaczewski new book.  I think it very gratifying to have the Tomart series completed (at least until 2017) and thank Jim for working on this project for thousands of hours.

I missed that 50th anniversary Redlines VW bug. It was probably hard to find. Searching ebay now. I got most of the 2018 Tuned VWs and still need the white Pawn VW. I have the black one. Not on the pegs as much as I used to be. Thanks for the great writeup on the 50th anniversary!

I found an interesting trend with the “Favorites.” Around hobbyDB’s HQ in Colorado, all I could find were the first 5 cars listed on the cards, all over the place. Figuring it would be hard to ever find the Drag Bus and ’55 Gasser, I was hesitant to even bite. Then I went to Nashville in December, and the second half of the series were everywhere, including the Bus and Gasser. So I grabbed a set of those and the others when I got home. Fantastic set!