Like some of the greatest tandems in Garbage Pail Kids history — such as Half-Nelson, Split-Kit or Crossover Kent — GeePeeKay has teamed with the collectibles ecosystem hobbyDB to revolutionize the GPK experience.

The new partnership will feature a complete archive of every Garbage Pail Kids sticker card and all merchandise created, centered around a GPK-specific marketplace. 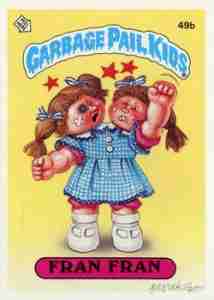 Think of it as a community home for all things related to Adam Bomb and his thousands of creepy cohorts.

To celebrate the union, GeePeeKay and hobbyDB have teamed together to offer a new version of the Garbage Pail Kids’ mascot in the form of an officially-licensed, six-card set exclusive to GeePeeKay.

What separates the GeePeeKay library powered by hobbyDB from other archives is our attention to the finest of details. In addition to all base sets, we’re cataloging every variation of Garbage Pail Kids sticker cards, including different colored borders and languages. We believe this will allow all levels of GPK enthusiasts to accurately sync their collections.

Among those variations, we’re documenting all legitimate card changes – think of the infamous “Schizo Fran – Fran Fran” controversy from Original Series 2, for example.

The catalog will also be home to all known and industry-recognized errors. That means you’ll find even the rarest of cards, such as the Series 9 #355b Semi Colin (No Number). 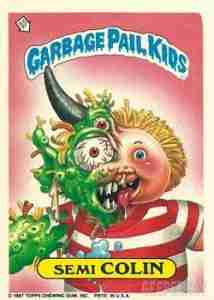 While the library is still a work in progress, it’s expanding everyday courtesy of Matt from GeePeeKay, Chris from hobbyDB and Andy Goodman.  Thanks also to Ira Friedman and Alfred Tam from Topps, both for advice, allowing us to create the Limited Edition cards and lots of images (many still to be uploaded), to noted GPK enthusiast Adam Goldberg, of ABC’s “The Goldbergs” who has started adding some of his amazing collection and Mike Horn for introductions.

While the rare cards might be difficult to find, it’s never been easier to locate your favorite characters, series and collections, as well as those elusive individual cards needed to complete your set. That’s thanks to a GeePeeKay Marketplace powered by hobbyDB, where buying and selling are made easy with just a few clicks of a button on a secure system.

Whether you own a rare Semi Colin or are just a casual collector, you’re going to want to show-off your collection. Our new management tools allow you to stylize your profile to proudly display that collection you’ve tirelessly worked to build.

Got an eye on a special card? Try our Wishlist feature to keep track of them. And be sure to follow the valuation of your cards as we add them to the library.

You’re going to want to know how much all your hard work is worth. Now you can with our Price Guide tools. Our system pulls prices from curators, marketplaces and eBay to assign an item’s value. Thanks to a team of volunteers, we’re working to assign values to all items before the end of the year. 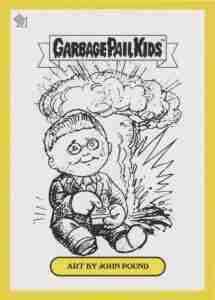 Each card released requires you complete a small task in order to “unlock” your purchase:

The back of the cards — except for the white bordered cards — are individually numbered. The reverse side also details the history of the idea sketches that led to Adam Bomb becoming the face of Garbage Pail Kids.

We’ve gamified the process of earning these exclusive cards via a series of tasks. Complete all six tasks to unlock the opportunity to purchase these rare cards. Find more details by clicking here, or go straight to the sales listings and purchase!