Model Cars That Look Weird in Certain Colors (But Nope, They Really Exist)

Over the past couple years, we’ve brought you lists of model cars that came in colors that made you scratch your head for one reason or another. Some of them, like the Hot Wheels Red Baron are strange in other tones because the color made it into the name of the car. Others were models of cars that only came in a single hue (or a very limited range) and just look bizarre otherwise.

But we found a few that, despite their odd appearance, are in fact based in reality to some degree. Some are based on production vehicles, and some are custom, but they are undeniably real in one way or another. So let’s cut the diecast companies some slack!

Harlequin Volkswagens: Auto World makes a VW Beetle model in various colors… as in a bunch of colors all at once, on different body panels. Strange, right? Well, in the late ‘60s, Volkswagen ran a famous ad showing a Beetle that had every body panel painted a different color. The idea was to demonstrate that since the car’s design hadn’t changed substantially in years, parts could easily be swapped between different years. In 1995, VW painted a multi-colored show car to indicate the various bright colors available on the new model. People started demanding a production version, so for 1996, they offered a Golf painted the same way. (Only 250 or so were ever made.) Since then, some customizers have done the same treatment to Beetles both vintage and new. So even though VW didn’t sell this exact model, it’s rooted in reality.

Rainbow Plymouth Barracuda: Auto World makes a pair of odd 1965 Barracudas that are covered in different hued bands from front to back. MOPAR never sold such a car, did they? No, they did not… but they did paint one like this for an advertisement to show off the spectrum of fantastic colors available. It’s unclear if they ever used it as a show car, but some collectors have painted their real Cudas that way as a tribute. So again yeah, that’s a legit scheme.

Silver and Black Buick Grand National: We’ve mentioned various scale models of the Buick GN that have come in colors other than black, which are, of course, all bogus hues. Johnny Lightning made a version that’s black with silver side panels that looks just as odd. But wait… the original 1982 GN actually came from the factory that way, so yep, another model that’s somehow correct.

Red GMC Syclone: Speaking of all-black muscle vehicles from The General, the GMC Syclone pickup was a potent, 4WD compact truck with monster power upgrades. And it only came in black. So what’s up with this smokin’ red version from Johnny Lightning? Well, there was a special Marlboro edition in 1992, the grand prize for ten lucky sweepstakes winners. The JL version has the correct colors and stripes, but lacks the Marlboro badging due to marketing regulations.

Blue Batmobile: The Batmobile is black, right? No matter which version we’re talking about? Well, not always. The most notable exception was the car from the Super Friends cartoon, which was a simplified version of the classic TV Batmobile. It was rendered in mostly blue, which was probably easier to color in animation cels. Super Friends was such a huge hit that this Hot Wheels model doesn’t really look that strange unless you think too much. 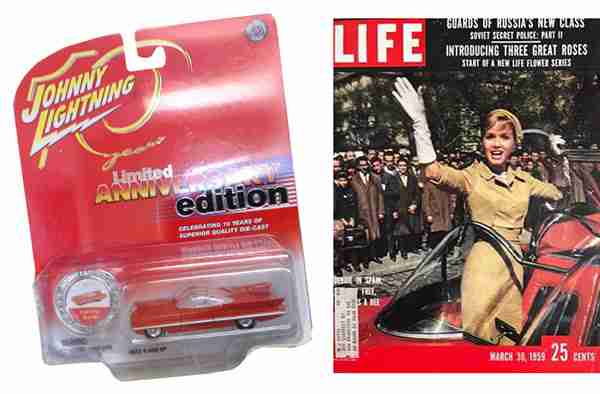 Red Lincoln Futura Concept: Speaking of Batmobiles, everyone knows the Futura Concept was a light, silvery blue hue before George Barris worked his magic on it for the Adam West era car. So what’s with all the different colored diecast models of it? Turns out the Futura was a fully-functioning, running car, and Ford sold it at some point in the late 1950s. By 1959, it had indeed been painted red as shown on the March 30, 1959 issue of LIFE magazine, featuring the ever glamorous Debbie Reynolds. It may have worn other colors as well, but only the Johnny Lightning model gets a pass for sure, even if the interior is the wrong shade.

Pink American Motors AMX: The original AMX, a shortened, two-seat version of the sporty Javelin, came in a lot of brash colors, but pink? Nope, not from the factory, anyway. However, in 1964 Hugh Hefner began presenting the Playmate Of The Year with a pink car every year. In 1968, he had an AMX painted that way as a gift to PMOY Angela Dorian. (It was easily one of the best year-appropriate cars given as the annual prize). Hot Wheels has offered brightly colored pink versions of the AMX over the years, but Johnny Lightning and Ertl have made models in the correct Playboy shade. Although JL has created other Playboy related diecast over the years, their AMX was offered without the magazine branding, but it’s still a wink and a nod to those in the know. (By the way, Ertl offers a pink 1967 Mustang, but that was not actually the prize that year… it was a Barracuda.)

Pink Dodge Custom Royal Lancer: Speaking of pink cars, here’s one that inexplicably doesn’t seem to exist in small scale…1950s Detroit brought out some wild colors, but Dodge really did a number with the pink and white La Femme in 1955. Marketed as a ladies car, it was kind of a flop, and you could argue it plays to certain stereotypes as the original “chick car.” On the other hand, at least it showed that a car company was considering that women were drivers and car buyers, too. Besides the paint, it was a mostly standard 1955 Royal Lancer… except for special fabric, matching purse, lipstick holder and cigarette case. 1956 saw another version, this time in two shades of orchid paint. Several companies, such as M2 Machines, make castings of the ’55, but so far, they haven’t done it in this color scheme. C’mon, there are women who collect diecast too, right?

Can you think of any other diecast cars that seem weirdly colored but are in fact, correct? Hit us up in the comments (and if you can, add a photo)!

I for one, would buy a model of the Dodge LaFemme! C’mon, M2, make it happen!