Matthew is a writer and former member of the Data Team at hobbyDB.  He enjoys blogging about the random things he collects.

Two decades and 4,000 or so books later you could say I’ve spent a minute or three combing bookshelves for rare titles, limited editions, or simply to commemorate a trip I’d like to remember. I thought my collecting was left to whim and chance, but how could it be if what a person collects offers a glimpse into what they value?

It’s a question I never asked myself, too consumed by what that next addition to my already full shelves would be. While I’m still unsure about all this, I have noticed a few quirky approaches I’ve developed towards finding that next great book, reflections that might either serve as tips for book collecting or as a list of inquiries to consider in light of your own collecting.

The Sympathizer by Viet Thanh Nguyen

The book that got me thinking about the different ways I collect, and how these preferences take shape over time, was Viet Thanh Nguyen’s Pulitzer Prize-winning novel The Sympathizer. The paperback release had a short run sandwiched between the hardback and the April 2016 Pulitzer Prize announcement with no mention of the win. I’d been eyeing the book after all the praise washed in, but it wasn’t until the night I heard Nguyen won the Pulitzer and I rushed to buy the book before closing that I recognized what sort of collector I’d become. Part of me hated the gaudy stamps prize wins lead to, while another part of me wanted to capture a moment in time. 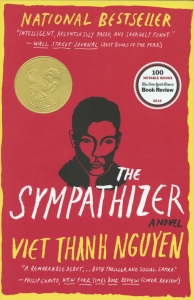 Prizes, the story goes, sell books, so publishers are quick to push new editions with shiny golden emblems touting the book’s success. Soon enough, the edition I found safely resting on the shelf that April night would disappear for good.

The Sympathizer was around book 3,859 of my collection, but it got me thinking of other ways in which these hidden preferences manifest themselves into an approach to curating a collection. Small and humble as this event was, I spied a wrinkle in book collecting like a sea change “into something rich and strange.” (That’s Shakespeare’s Tempest, where “sea-change” first appeared. The more you know.)

I’m a big fan of science fiction, and there is perhaps no greater, no more influential science fiction short story anthology than Harlan Ellison’s Dangerous Visions (1967). Consider it the bridge from Ray Bradbury’s innocent if haunting tales of neighborhood mischief to William Gibson’s grim world of cyberpunk. So imagine my shock when I happened upon a first edition of its follow-up, a book I didn’t even know existed, entitled Again, Dangerous Visions (1972), sitting in a low lit basement of an old mansion turned community bookstore in a part of town I’d never ventured to before. 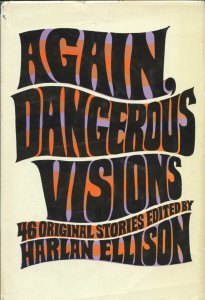 Visits to super small, super local stores like this one, which I found on Yelp, not only have random and fun finds but are (fortunately? unfortunately?) rarely shopped and consistently get new stock in from quality collections, making the shelves filled with unexpected finds from local authors and regional topics to the Ellison tome I’m still in shock over. Check those stores near universities, too, as they have a rich selection of titles and subjects thanks to students looking to cash in post-final exam.

It’s also worth chatting up the folks working the store, too, as they typically know of other small book shops, hold their own events, or might even invite you to an intimate poetry reading at a famous local author’s house! You never know. Local booksellers are almost always part of the local community writ large, so conversations with them are always fruitful and interesting. Plus, I’ve taken to collecting bookmarks from each place I visit; another relic, another memory, a richer life.

I found Bill Cotter’s Fever Chart, which he promoted in Austin while I lived there, signed with the following inscription: “Carla! Spiderhouse turned into JFB—What’s Next? Whatever it is, I cannot wait to read your whole manuscript! Bill” along with a steaming cup of coffee over his name. I’m not privy to the conversation Bill had with Carla, but I do know Spiderhouse is one of the top artist hangouts in Austin. And he wants to read Carla’s manuscript?! That’s classic writing community fodder. 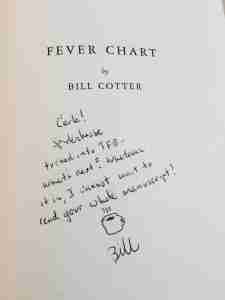 The inscription inside my first edition copy of Bill Cotter’s Fever Chart.

While I found this at a used bookstore in the Austin area, I’ve found signed first editions from the likes of Don Delillo, Michael Chabon, and Dave Eggers at large, local bookstores that often serve as stops on national book tours. Stores like these, such as Tattered Cover Book Store here in Denver, also have the author sign additional books to stock signed first editions in case you missed the event.

One of the most elusive books I’ve ever sought was David Mitchell’s Number9Dream, which for some reason is the only book he wrote not regularly stocked by big box and local stores alike, and it soon became a personal challenge to find the thing myself (not online). So imagine my surprise when I found it moping on a poorly lit metal shelf at some random Good Will in Texas. Eureka! Roughly four years of looking, calling, asking and all of a sudden there it was. I still wonder all these years and numerous read-throughs later if it’s a counterfeit. 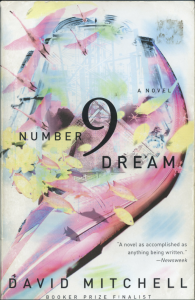 Any place that sells anything used typically has a shelf or two, however hidden and thin, of used books for cheap. While perhaps the most obvious suggestion on this list, it’s also the most fruitful. The selection is typically so piquant it demands a glance. Estate sales, library sales, and store closings are always strong candidates for unique book finds. But so too are places like Good Will, antique shops, or consignment shops.

My most recent find, in fact, was from an antique consignment shop in Dallas where I scored a 1957 first edition of Ben Hogan’s Five Lesson’s: The Modern Fundamentals of Golf as a Christmas gift for my dad, a book he later said he had been looking for, really, his entire life.

History of My Heart by Robert Pinsky

I went to what essentially amounted to a writer’s boot camp this past summer in Archer City, Texas, where Larry McMurtry’s Pulitzer Prize-winning mammoth Lonesome Dove is set, along with his The Last Picture Show. McMurtry also has a bookstore that bloomed from his own personal collection of 10,000+ books, the initial sale of which immediately became part of Texas book collecting lore.

The store was, in a word, overwhelming. Hot. Disorganized. Overpriced. Almost as a surrender, I decided upon a paper-thin book of poetry, History of My Heart by Robert Pinsky, the cheapest I could find at $5, just to get out of there because I felt I should have walked out of there with something for some reason I couldn’t quite name. 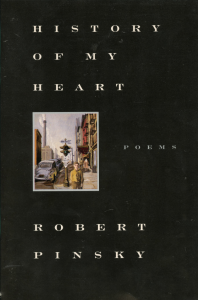 It matters less what this book is, and more where I found it.

Though I’ve not yet read the book and, really, have no plans to, when I look at that book I remember my time in that town, that week spent meeting people from around the country and beyond, the glorious food and conversations we shared, an unforgettable time cemented with the purchase of a rather forgettable book.

You’ll never guess what you’ll come across nor how you’ll find it. It’s a metaphor for life I suppose, how a constant aimless unfolding can be refined into a purposeful search with the most unexpected event.

Where has your collecting taken you? How has that changed over the years?