Chevrolet dropped a new design on the car world last week, the 8th generation Corvette, also known as the C8. It’s the first mid-engined Vette ever, and a darn handsome car. And if the pricing information is accurate, it’s a bargain starting just under $60,000. We’ve never seen anything like it.

No really, we didn’t get much of a preview because there wasn’t a wild concept car designed ahead of time like most previous redesigns. In the past, some of those Corvette concepts would be outrageous, some dead on, but most gave at least a glimpse of the general direction the new design would take. In this case, an almost finished prototype in camouflage suddenly started driving around. It was accurate, but hard to see.

We would love to show you small scale versions of it, but… there don’t seem to be any yet. The way this car was developed killed the lead time for diecast companies to create miniatures. So until we get the C8 in small scale, let’s look at some earlier concepts that made it in miniature. While basically every year of Corvette has been represented in diecast, a good number of concept cars have been available as well. Some were definitely more predictive than others…

Fans have asked for a Corvette Shooting brake since the C1 Nomad was shown.

The very first Corvette was a startling revelation to American car buyers. Compact, with only two seats, it looked like a million bucks but didn’t cost it. It only came in one color (white) and one body type (convertible). Chevy showed off some new possibilities with some other body styles, but none were produced. The Nomad shooting brake concept would predict the basic style of 1955-57 Bel-Air based wagons.

The 1959 Stingray Racer  was a very fast, drop dead sexy car that really showed off the future styling and performance of the Corvette several years in advance. Much of the design made it into the C2 Vette, the shortest lived but possibly most beautiful generation. The Mako Shark  concept also showed off some of those lines with some very shark-inspired features.

The Mako Shark II was all Hot Wheels had to go on at the time. Not bad, eh?

The AstroVette was a concept towards a swoopier C3.

The third gen Corvette was previewed with the Mako Shark II. Aside from the tapered fastback (a holdover from the C2), the design was pretty accurate. Somehow, the Custom Corvette , one of the Original 16 Hot Wheels, looked really, really close to the production car despite General Motors tightly guarding the design. The AstroVette concept was a bit over the top but had those Coke bottle curves.

As the C3 evolved over a very long run, additional concepts showed ways to possibly freshen it up. It was during this era the first potential mid-engine Corvette concepts started to tantalize buyers. Spoiler alert… none of them would come to fruition.

The AeroVette kind of presaged the C4 if you squint.

Fun fact: There were no 1983 Corvettes sold to the public… the turnover from the C3  to the C4 took longer than expected, so they skipped a year. None of the concepts that preceded it really showed off the clean-edged style of the production car. The AeroVette  from 1973 (and revised years later) kind of hinted at those smooth lines, but that was about it.

The C5 was teased in several rounded, swoopy concepts and drawings before Chevy finally settled on the new design. The Stingray III concept showed some of those directions in a very 90s shade of purple. This was one case where the restraint of the final design was an improvement. In some interesting diecast history, designers at Matchbox were preparing a new scale model from limited information, when they were accidentally sent files and molds for a larger scale model. From that, they were able to craft the first accurate 1/64 scale C5. 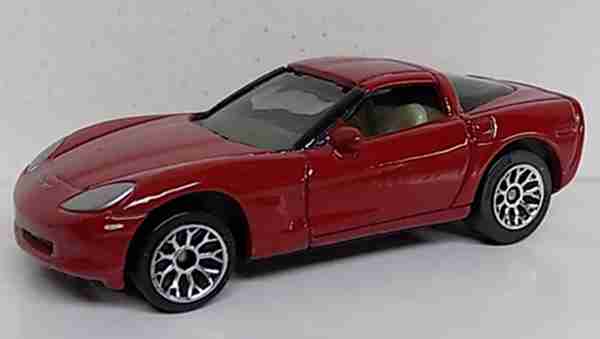 Sorry, folks… no models of C6 concepts because there weren’t any publicly shown cars.

Probably the most subtle redesign in Corvette history, there wasn’t really an actual concept of the C6 to show off. There were renderings in all the automotive publications, but no show car. 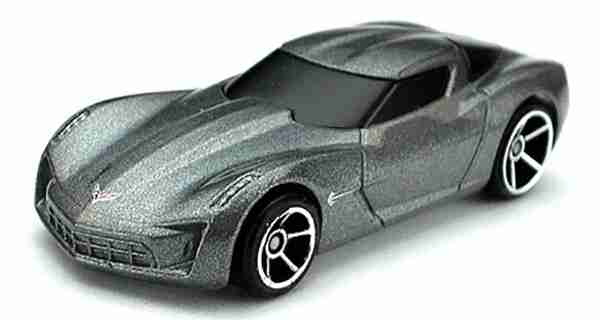 The 2009 Stingray concept was designed in time to appear in the latest Transformers movie.

Since the C5 and C6 were so similar in design philosophy, the next generation called for something radical. The 2009 Stingray Concept was shown well ahead of the redesign and boasted some wild new ideas. By the time the C7 hit the streets, it had been toned down considerably. It was still a major departure, however. Still not a mid engine, of course.

There was no publicly shown C8 concept… just this camo’d beauty.

Which brings us to the C8. GM was so tight with the information and licensing that no scale models of the latest generation were available at the time of the reveal. And with no concept cars to work from, there have been a few years of the same designs kicking around with no new diecast. It’s certain we’ll see some new miniatures based on this mid-engine miracle on the store shelves and pegs soon.

Know of other Corvette concepts? We’re especially interested in the ones that were reproduced in miniature.

Best ever retail diecast that ever coincided with a new gen reveal was the 1/12 Hot Wheels C6.

To this day, the detail and value of those units are amazing. That was the only year GM really got on board with a model maker before a car reveal.

Very disappointed with the promotion ,or Non Promo of the C8. It probably cost a small fortune for GM to back Mattel for the large, spot on replica.  Instead they are doing a travelling circus across the country to show the real car. And eventually we’ll get an overpriced resin model with no openings or a tiny Autoart 1/18 scale for 200 bucks.