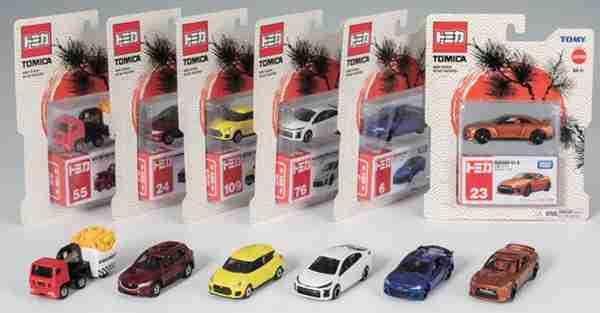 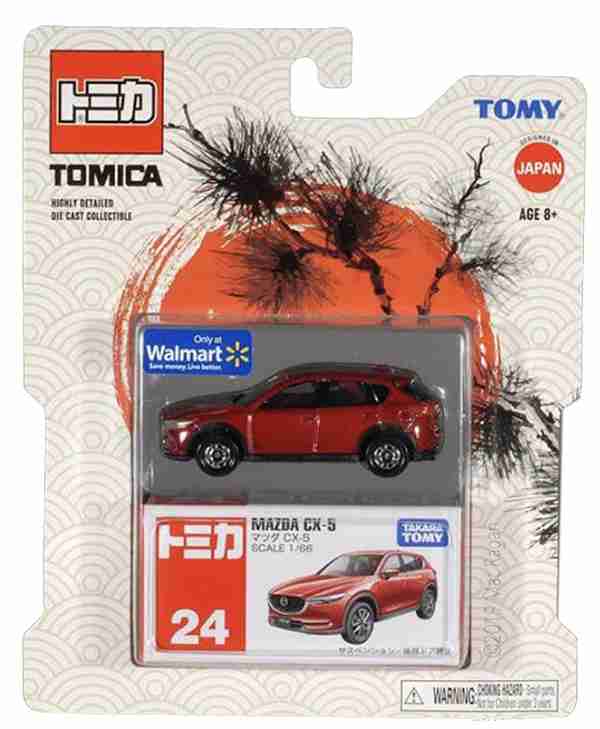 After a long absence from the U.S. and Canadian market, Japanese diecast giant Tomica is coming back. An initial wave of 6 models recently started showing up at Walmart stores, followed soon by half a dozen more.

Tomica has been in the diecast business since the early 1970s, and are the biggest brand in Japan as well as many other countries. Since the U.S. market was originally a big part of their plans, their offerings have included a lot of American marques and models. The relaunch includes specifically modern Japanese cars and trucks.

Tomica is generally known for well-detailed, realistic models of actual cars, as opposed to unlicensed fantasy designs or extreme customs and hot rods. Their cars are around 1/64, but are usually scaled to take advantage of existing wheel sizes. So they might range from 1/50 to almost 1/100 for something like the 1970s Winnebago camper. Tomica cars are marked on the packaging and on the baseplate with the exact scale. Despite the scale differences, Tomica’s well-proportioned, sensible vehicles have been popular as scenery on model railroads.

The first wave of cars to hit the pegs at Walmart include a Nissan GT-R, Subaru BRZ, Suzuki Swift Sport, Mazda CX-5, and Toyota Prius. The second wave includes a Mitsubishi Outlander, Toyota C-HR, Lexus RC-F,  Nissan Note, and Subaru Impreza. These should be familiar to U.S. buyers as they most of them are offered in 1/1 scale.

The new release also includes a pair of Japanese trucks: in wave one, a Isuzu with a payload of giant french fries, and in wave two, a Hino with a family of pandas sitting on the back. So they do get whimsical sometimes. (Other fun past offerings have also included vehicles similar to the Hot Wheels Character Cars, based on such Nippon legends as Godzilla.)

These trucks are part of Tomica’s 2019 return to North America.

Their cars also feature premium features like working suspension and opening doors long after those features have disappeared with other brands. There are usually lots of painted details such as lights, trim, and even elaborate grille badges and nameplates. The packaging has a very international feel with lots of Japanese text, and inside the blister is a box reminiscent of the designs the cars have traditionally come in over the years.

The cars are set to retail for around $5 slotting them in between Hot Wheels premium lines and Johnny Lightning’s latest offerings. The initial dozen will be followed by more of their other current castings as Tomica celebrates their 50th anniversary in 2020.

What’s your favorite Tomica diecast? Let us know in the comments!

!st 2 waves already listed in my hobbydb store for 2 weeks. They are very detailed. They are well worth the price with the detail level and proper scale. The new packaging is excellent.

Apparently Wave 2 is rolling out slowly across the country. The painted details like the hood badges are really nice.

They started to hit New Zealand as well (could they be planning on selling them internationally?).

They are priced at $9 so they seem to sit for longer than 5 minutes which is nice (easier to collect without the hassle of the secondary market).

The biggest complaint other than the wheels (Tomica aren’t known for their wheels) is the absence of more classic cars. maybe with their 20th anniversary coming up it would be suitable to release some recreations of castings from the past.