Sindy coming to America (and changing its Advertising Agency)!

Charlie Rosner started an ad agency with Harvey Herman in the early 80s which had a lot of unexpected results and here he is sharing some of interest to the hobbyDB readership. Here are his Musings.

Our very first account was the venerable Marx Toys, headquartered in Stamford, Connecticut, where in future years I would spend a lot of time, have several clients, make some close friends, even do work for a Stamford city agency called The Stamford Urban Redevelopment Commission, a town where Joanie Rosner recently moved.

Marx was most famous for children’s tin toys, but it happened to be owned by a British firm called Dumbee Combex Marx, Ltd. A DCM subsidiary Pedigree Dolls & Toys had launched and made a great success out of an 11” fashion doll called Sindy, the English equivalent of Barbie, although a complete opposite of Barbie in every imaginable way.

When the Brits decided to try selling Sindy in the US, it happened that Harvey Herman was living and working in Los Angeles, freelancing as a marketing consultant. And he had developed a friendship with a man who had spent his life in the children’s toy business. His name was Larry Aledort. Larry was just a terrific guy, and when Marx asked Larry to recommend someone to help them launch Sindy in the US, Larry recommended Harvey.

Harvey knew nothing about children’s toys, but he was as savvy marketing guy as one could ever hope to work with- who had graduated with a degree in chemistry but quickly decided his future ought to be on Madison Avenue. He became an expert at what they called sales promotion, and could pretty much figure out how to do anything.

Harvey had been my boss, at Smith Greenland Advertising, and when he moved to California he asked me to help him with an account called Merns Clothing. I was a Group Creative Director at Lord Geller Federico at the time, but Dick Lord gave me permission to make a few extra bucks and help Harvey out. So when Harvey asked me to help him with Sindy, I non-shalantly said “sure, Harv.” Talk about “tipping points.

Honestly, Harvey did all of the work. I did almost nothing, except for one TV commercial I did with Harvey. We developed a positioning for Sindy as the wholesome alternative to Barbie, who was the 11.5” version of Marilyn Monroe. And boys, honestly, it was not a great commercial. But the Charlie Morrow jingle was nice. 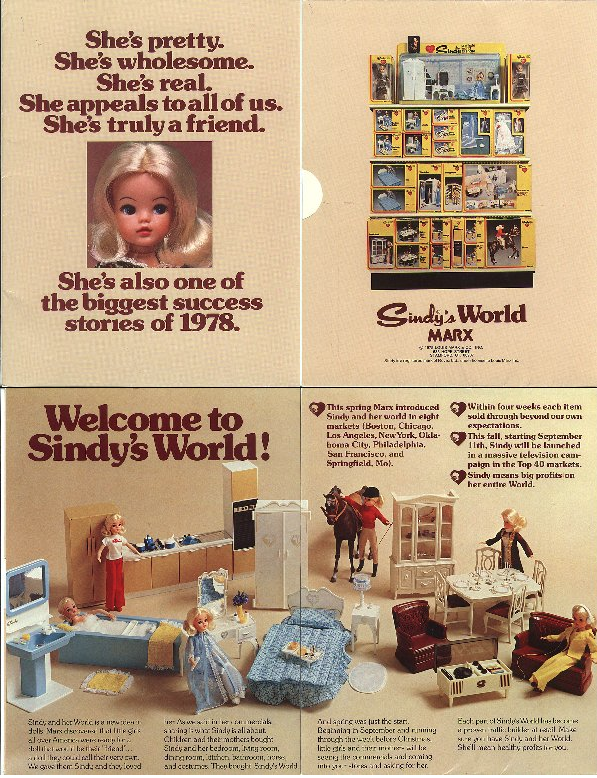 One of the brochures for the US launch

Sindy clicked with mom’s, and eventually their daughters, and over the next year, Sindy became the first doll to take a significant share of market out of Mattel’s Barbie. It was a big deal in the world of toys, and Marx Toys invited Harvey to open an in-house advertising agency. We talked it over, but Harvey was a bit of a maverick and iconoclast, and so we told Marx no, but we’d open an advertising agency in Manhattan to handle it.

Harvey was eleven years older than me, and a much more sophisticated business person, but honestly neither one of us really knew what we getting into. Marx Toys was a big account. It was being handled by the gigantic McCann Ericson.

Marx Toys US President, Bob Butler asked us what we’d need to start our shop. I think in retrospect he meant how much cash did we need before we would open a shop, but Harvey, perhaps in an instant of pure unthinking bravado, just said “…just pay us exactly what you’ve been paying McCann.

They were paying McCann $33,000. A month, plus 17.65% markup on production, which translated into an additional $5,000. To us, it seemed like a fortune. Of course, we had no offices, no staff, not lawyers or accountants, zip. And there was a boatload of work to be done- over a dozen TV commercials, six brochures, all of the designs for a Toy Fair showroom, all just six months away. But Harvey and I were always very prolific, se we figured “..so what, what’s the big deal?”