The Joker is IT: Collecting Lovable Clowns in Pop Culture 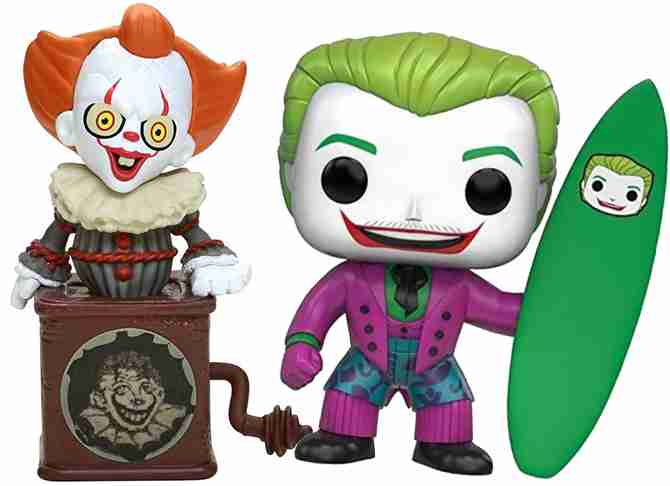 Hey, collectors, do you know what time it is? It’s clown time! (Maniacal laugh). In all seriousness, and clowns are a serious subject, they’re kind of a big deal right now in pop culture. The second IT movie is doing big box office, as is the Clown Prince of Crime, aka Joker.

So with those two lovable jesters going at it (I haven’t seen either movie, so I assume they’re light-hearted comedies), why not look at some other clowns from pop culture? And since this is hobbyDB, we’re focusing on ones with collectibility. Also, Halloween is around the corner, and you might need a costume idea.

Stephen King’s original novel IT was actually a middling success with critics, and he even disavowed it to a degree. Pennywise seems innocent enough to the kids at first, which is the scary part. Nonetheless, it made for a scary TV movie adaptation in the early ‘90s and a downright horrifying two-part cinematic remake in the last few years. Both generations are represented in the collectible world.

Not to be outdone, the Joker has pestering Gotham City for so long he has become something of a sympathetic creature. Thanks to the fluidity of the DC timeline, the character has been interpreted numerous ways from relatively benign (Ceasar Romero) to comically psychotic (Jack Nicholson, Mark Hammill) to psychopathic (Heath Ledger) to, well, a tragic and misunderstood figure (Joaquin Phoenix). While the older versions of Joker have been well represented in collectible form, the latest one has not… yet.

Could it be that the “R” rating of the new movie makes it not as useful for being turned into what are essentially toys such as Funko Pop figures? Well, consider that Ledger’s Joker was anything but kid-friendly (a lot of folks felt The Dark Knight should have come with the same rating) but is well represented in collectibles. Also, there is no shortage of Pennywise merchandise, and both IT movies were for grownups.

It might be that the passage of time was necessary for those two versions to become collectible. Ledger’s Oscar-winning performance has become so iconic that it has passed into the culture in general. And part one of IT came out two years ago, so the critical and box office success suggested collectors wanted more Pennywise.

Even Jared Leto’s much-maligned take on the character was worthy of some Pop love. But Pheonix’s performance has also come with critical acclaim (more so than the movie itself even). And early box office has been no joke. While we wait for the punchline, let’s look at some other pop culture clowns… 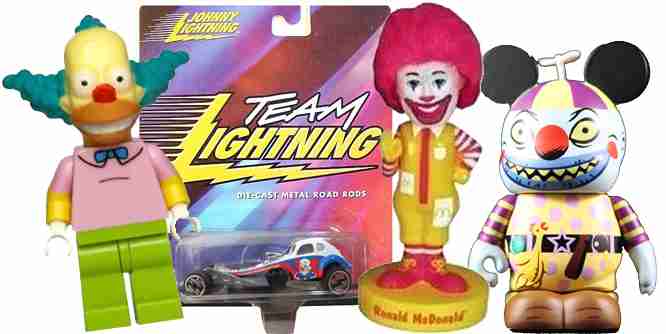 If you grew up in the ’60s or ’70s in the Chicago area, you were treated to a morning of goofiness from Bozo. Other stations in other markets had weak imitations of him, but WGN Bozo was the real deal.

A younger generation grew up with Krusty the Clown as their makeup intensive morning entertainment. As a part of the Simpsons universe, we get to see him not only behind the scenes but in day-to-day life where he never removes his costume or gets out of character (aside from being a surly, bothered, chain-smoking pile of bitterness).

Even though he’s a throwaway character, The Clown With The Tearaway Face adds a bit of spooky fun to the Nightmare Before Christmas. But not too spooky.

Not to get into the politics or ethics of fast food and consumerism, but Ronald McDonald has been enticing kids into his restaurants for decades. Despite his gentle demeanor, artists and satirists have portrayed him in a scarier form, the weirdest being the heavy metal band Mac Sabbath. Seriously, check them out!

Speaking of Clowns Who Rock…

Love’em or hate ‘em, the boys of Insane Clown Posse put on an intense show and have an even more intense following. Juggalos, their fans, are more invested in the whole circus act than the band itself.

Can we talk about KISS? As much as they wanted to be scary metal gods, their music was more of a loud, hard, pop sound and their mostly monochromatic outfits barely qualified as menacing. Don’t worry, though, we’re laughing with you, not at you. 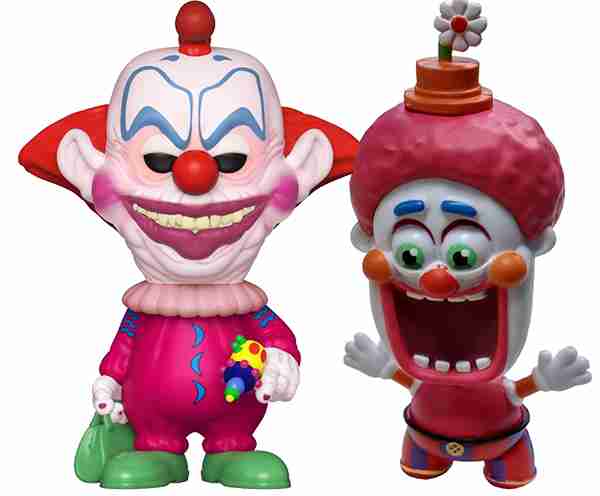 No one would ever pretend Killer Klowns From Outer Space is a cinematic masterpiece. But it was a good, silly, modestly scary time at the cinema, and in the right frame of mind, buckets of fun.

Clown Time is Over 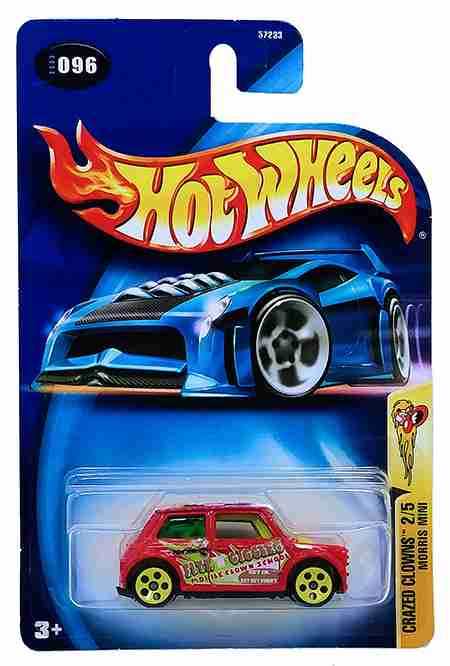 Regardless of whether clowns give you the giggles or nightmares, there are plenty more collectibles out there we just couldn’t fit in our clown car. Let us know some of your favorites in the comments!