There are 201 variations of the Hot Wheels Dairy Delivery – how do I find mine?

Some collectibles – like Hot Wheels cars – can have hundreds of variants (sometimes known as variations). Let’s look at the Dairy Delivery for example.

This happens because not only do manufacturers make lots of different versions of an item to get mileage out of the tooling, they can also make small changes during production runs so some items that appear to be the same at a glance are actually different! On hobbyDB, that can lead to epic confusion as tiny differences are difficult to see at a glance and there can be dozens of items listed which look to be exactly the same. This can happen for a variety of reasons including different baseplate countries, different cards, and wheel variations.  See for example these 5 known variations of the First Edition Dairy Delivery  – 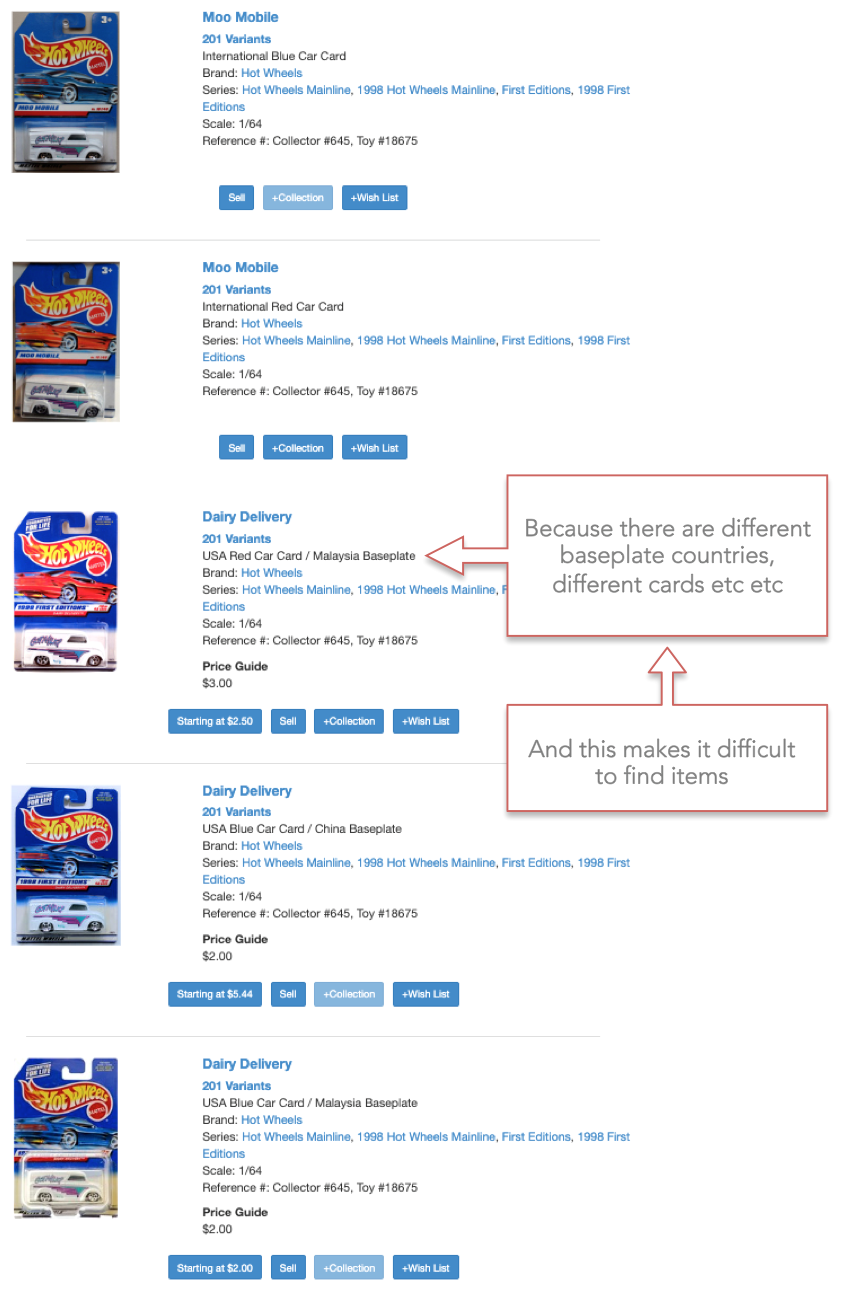 But we’ve been working hard on a solution! What we’re planning to do is introduce a new concept – sub-variants! Where items are obviously intended by the maker to be different – for example, if one is blue and one is green, we’ll be calling those variants, just like we always have. But if both look exactly the same save for one small difference, for example, if both are white with purple and aquamarine stripes but one is made in Malaysia and the other in China, those will now be considered sub-variants (so the five variations above will all be sub-variants). Now, you’ll be able to see easily which variant looks like the item you have – and then drill down easily into the sub-variants (if there are any) to determine exactly which one you’ve got! 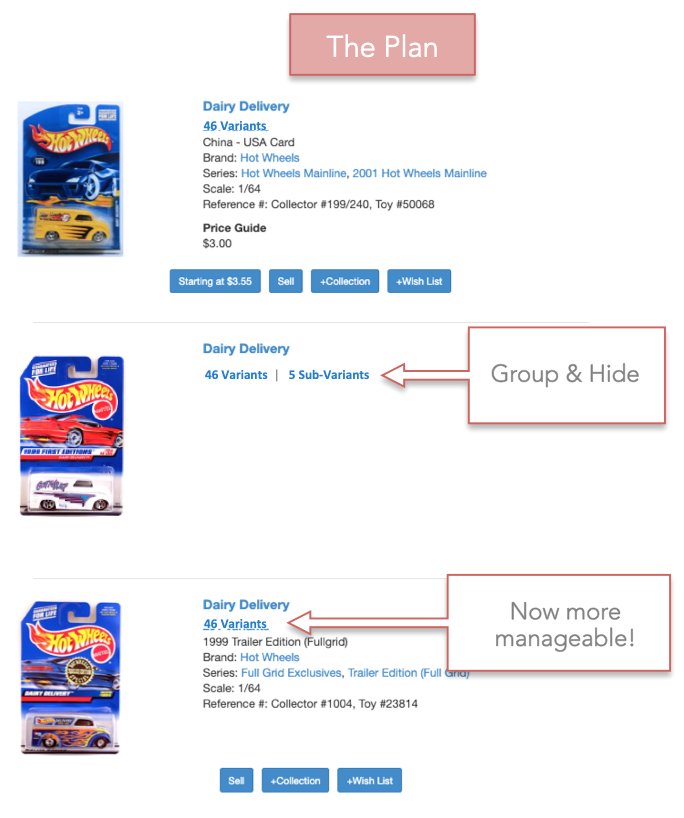 The sub-variant group would have a main image that identifies the full package like in this example.  But the sub-variant photo that shows when opening the group could now be focused on what makes this particular sub-variant different from the others, say the last one of them, the “USA Blue Car Card / Malaysia Baseplate” could show a combination of the card and the baseplate, making it really easy to spot the difference  –

As this problem currently exists not just for Hot Wheels, but also for Funko Shared Exclusives, Hard Rock Cafe pins with different back patterns and many other collectibles this should make it much easier to identify what you have and what you still miss!

It will be a bit more tedious when listing items but will really help eliminate duplicate listings if followed correctly.

Trust me, Bud, it will be much easier. At the moment that first of those white Dairy Deliveries could be on Page 1 and the others on Page 3 and 5 (there are after all 201 of them!). Now you find it immediately (you can always add “First Editions” to the search), click through and select one of the five as yours.

If you want to add it to your collection, wishlist or buy it you do the same thing and will immediately see which one you have or if any of them are available.

This will also make it crystal clear that the Variant summery is only about what makes these sub-variants different from each other (for the others you would need it as they are clearly different).

I’m glad to see this getting addressed as it comes up often as a reason not to use hobbyDB. Having the cars listed by each year release first and then the sub variations is
perfect. This will help contain all the card and minor changes for each release that overwhelm the user. Using the Dairy Delivery example shown, I would count the country change as a main variation. A country change on the same year’s release can bring up it’s own card and minor variations under it. I would also count major wheel hub changes as their own entry as it is a change that can have their own sub variations and card changes.

This will help with a problem I’ve encountered a lot too with how do I enter a variation that isn’t listed. Example is the First Edition Maelstrom with large text and small text on the base. I do not know what base is accounted for on the one currently listed. I do not want to assign it large or small text as others show it for sale and in their collections. So the only way currently would be to list both those cars again with the original entry being a catch all for those that do not care about the base change.

I would highly recommend a sub section for errors. This would help so I could someday enter my error collection here without overwhelming the system. Currently at 13,500+ errors.

I would also recommend getting rid of custom cars listed in the totals of variants too. They balloon the listings with too many one-off items. If there was a way to push those and errors to the back pages of search, that would be helpful too. The older items that people look for get buried.

Thanks for the suggestions.  Re country change, that would be a decision for the curator of the page to make (I can see both arguments).

Re customs and errors, yes, we need some kind of filter or other way to allow seeing them or not.  I think this is something we need to do across the site – the more data we get the more we need to enable folks to see the important info first and then have the ability to drill-down if they want to.

On the customs and errors I agree as well. The thing that I think seemed to work was having the customs in their own subgroup under the castings and I was trying to do that along with using a category ‘Customs by Others’ mostly because there are a lot of customizers, some more noted than others and they have a following of people who look for their work. As with everything though getting everyone on the same page as far as listing them will be a challenge.

Customs could be sorted out by adding Hot Wheels to the search.  So Hot Wheels Dairy Delivery will not show any customs (we use the Customizer as the Brand for those).  Errors and Prototypes would have to be handled through the production status filter.

Will there be a moderator that can answer questions, such as, is different wheels from front to back a variation or an error?

Yes, Errol, that is the job of our curators.

This will work great in Video Games, Movies, and Music. As many of them have different editions. I’ve been linking them with subject mater for platform, and title. But this could allow different versions (limited editions, country variants etc to all link to one main entry, with sub variants!)