If you had a chance to see the Hot Wheels Legends Tour this summer, it was an amazing gathering of customs, hot rods, stock cars, whatever’s cool in car culture. Each stop on the tour featured lots of local cars, but there were also several amazing customs that made it to every location.

In addition to being a good-time festival, it was also a competition among some very serious customizers. The grand prize included the winning car being miniaturized by Mattel and turned into an actual 1/64 scale Hot Wheels diecast car. 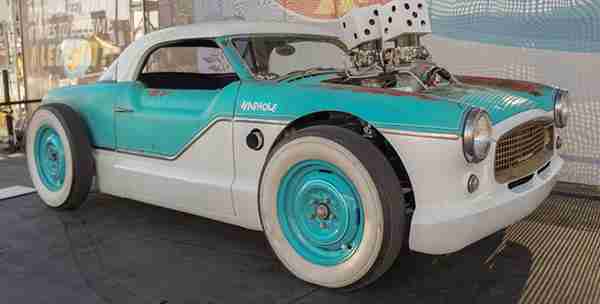 For 2019, the winner is The Nash, a slightly modified Nash Metropolitan by Greg Salzillo and Dave Ford. By slightly modified, we mean the original 40 hp engine was replaced with a Small Block Chevy 305, cranking out 300 horses. It also has unique headers coming out of the fenders, dice shaped coves on the velocity stacks, old school stock steel wheels, and original bias-ply tires that stick way outside the fenders.

This isn’t the first time Hot Wheels has commemorated brilliant real-life customs like this, of course. Here are some others.

Ed Roth’s Beatnik Bandit – Most collectors know that some of the early fantasy designs for Hot Wheels were based on actual custom show cars. One of the very first and most famous was the Beatnik Bandit by Ed “Big Daddy” Roth. Some of his other designs would be miniaturized later, but the Bandit is the pioneer.

Tom Daniel’s Paddy Wagon – Another legendary customizer/hot rodder of the 1950s and ’60s, Daniel created many wicked hot rods that were turned into model kits. And some of them would also make it to 1/64, such as the Paddy Wagon, one of the “just outside the Original 16” offerings.

Harry Bradley’s Custom Fleetside – Many of the customs have been turned into Hot Wheels cars over the years, belonged to Mattel employees. One of the Original 16 cars, the Custom Fleetside was based on a custom El Camino owned by designer Harry Bradley. In fact, this car inspired the mild custom look that was shared by many of the Original 16 and beyond.

Larry Wood’s Ford COE Truck – Wood joined Hot Wheels one year after their debut, but he may as well have been there from the start. Among the hundreds of designs he has contributed, his actual custom ’38 Ford Cab Over Engine Truck has been replicated in 1/64 for the Hot Wheels premium line.

Brandon Vetuskey’s Custom Firebird – More recently, Brandon Vetuskey has been one of the lead designers at Hot Wheels, turning out all sorts of new classics. His real custom ’67 Pontiac Firebird became 1/64 legend a couple years ago.

Mike Zarnock’s Altered Roadster – Zarnock is not a Hot Wheels employee, but he may as well be. He is one of the prominent historians of the brand and also a part-time drag racer. Mattel decided his pedigree and design skills should be honored with a 1/64 model of his red dragster.

The exact release date of The Nash has yet to be determined. “We’re extremely overwhelmed, proud and excited over what Dave and I created with The Nash,” says Salzillo. “I can’t wait to see my kids’ faces when they see their dad’s car turned into a real Hot Wheels toy.” Best of all, these cars will be part of the mainline collection, so they will be affordable and available to most collectors.

Expect to see The Nash in stores sometime as part of the 2020 series.

Join us and learn more about the hobbyDB mission and vision at our Wefunder Profile.

The ‘Nashole’ will most likely not make it to the line-up until 2021, because 2020 is all ready slated. It takes about a year for each casting to be added to the line-up. As you can see the ‘2JetZ’ took a year as it is just now being released in the 2020 line-up.