With the final chapter of the Star Wars trilogy of trilogies about to hit theaters, let’s look back at the history of the franchise in terms of Star Wars collectibles. Which character (and related collectible) was the most significant from each movie? It could be the most popular, the rarest, the most controversial, or the most ground-breaking. Also, let’s look at these in the order you’re supposed to now watch them, instead of when they were actually made. 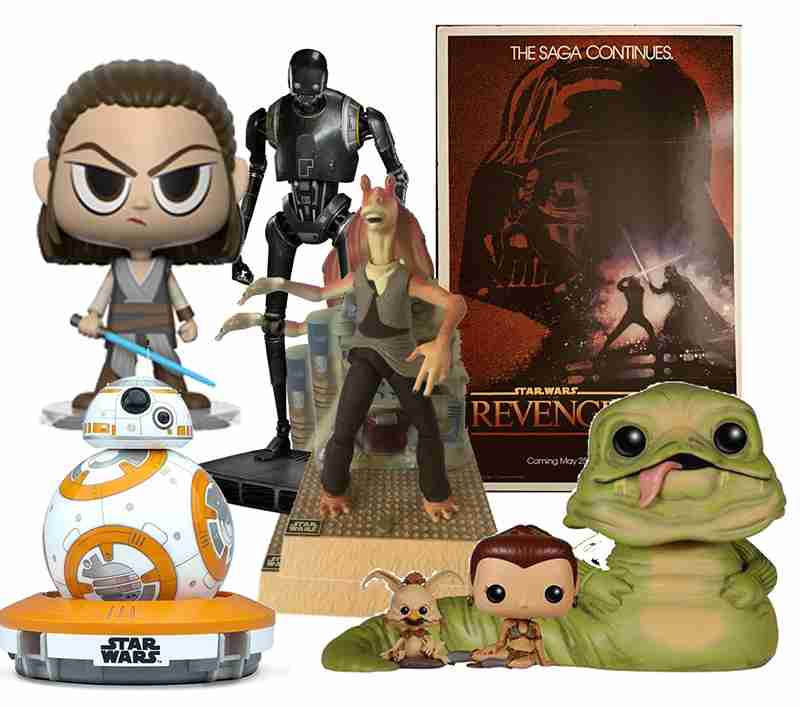 Episode I – The Phantom Menace: Let’s just get this out of the way. It’s Jar Jar Binks. It has to be Jar Jar. Fans of the original trilogy (or the middle trilogy depending on how you count) had some trepidation about reviving the franchise for a trio of prequels. And much about Episode 1 was not received well when it hit theaters. History has been a bit more kind to the movie in the 20 years since its release, but poor Jar Jar was hated then and his persona has aged even worse. Some sort of talking Jar Jar figure has to be it. Perhaps one that dances as well?

Episode II – Attack of the Clones: “Boba, I am your father!” Boba Fett rivals several other characters for coolest rogue in the universe (Apologies to Han Solo and Lando Calrissian). This film concerns Jango Fett, Boba’s father. Well, Boba is his clone, so “father” is a loose term. Either way, Someone from the Fett lineage had to make this list, and since they’re genetically identical, it’s Jango time!

Episode III – Revenge of the Sith: Remember that plucky kid who won the pod race in Episode I? No spoilers, but it turns out he becomes the baddest of the bad, Darth Vader himself. If you watch the movies in order, this is the first on-screen appearance of Vader. This movie doesn’t have a lot of strong collectible contenders contemporary with the film’s release, so let’s go more modern with this diorama of Anakin Skywalker and Obi-Wan Kenobi dueling for the first time.

Episode IV – A New Hope: Over 40 years after its release, this movie has held up impeccably well. The entire cast of characters and the spaceship designs haven’t lost any of their magic over the years. This was also the dawn of the modern collectibles age, and the studio was not at all prepared for the popularity of the movie or the toys and other products it would inspire. One thing they did get right at the time… The Marvel comics adaptation of the saga. When the movie hit theaters, “Star Wars” issue #1 was not far behind. Lessons were learned, memories were made. Issue #1 combines everything great about the movies plus the world of comics. And there are some rare variants, too.

Episode V – The Empire Strikes Back: In the first movie (or fourth?) Princess Leia was kind of a MacGuffin, a damsel in distress in a frumpy gown. But in this installment, she busts out a laser rifle on Hoth, and then gets several chances to be the hero in ways viewers never saw coming. And let’s face it, the scene with Jabba the Hutt and Salacious Crumb is memorable for so many reasons. So, this Funko Pop set with Leia, the giant space slug and his jester works.

Episode VI – Return of the Jedi: By the time the third installment (or sixth by this count) arrived, toy companies and collectors were becoming savvy on how to deal with collectibles. Tons of action figures were sold, and many of those were preserved in their packaging, so many of them are not all that rare. On the other hand, a pre-production glitch created one unintended collector’s item. Early versions of the movie poster referred to the film as Revenge of the Jedi, but for various reasons, Lucas decided to change the title to Return. So original posters with the early title are worth a lot more than the official version. (Just make sure it’s not a reprint!)

Episode VII – The Force Awakens: A lot of folks saw this film as something of a reboot/remake of the first Star Wars movie (or the fourth… you get the idea.) Our hero Finn impersonating a Stormtrooper, Kylo Ren wearing a black mask and cape (nowhere near as menacing as Darth Vader ever was, though), and Rey… okay, not a damsel in distress, but a fierce fighter right from the get-go. But the movie, from a collectible standpoint, belongs to BB-8, especially the remote control version!

Episode VIII – The Last Jedi: No spoilers here, but it’s neat to see Luke Skywalker again, especially with Han Solo and Leia in short supply. Let’s just say Rey really owns this movie. So any figure where she’s wielding a lightsaber fits the bill here. (Not that she’s the Last Jedi referred to in the title or anything. No spoilers, remember?)

Episode IX – Rise of Skywalker: Baby Yoda isn’t in this movie, is he? Since it doesn’t come out until this weekend, we can’t be sure. So far, the available collectibles haven’t revealed any apparent spoilers. Regardless, it really feels like nothing in this movie can’t possibly top Baby Yoda.

Rogue One – A Star Wars Story: This is a strange entry into the Star Wars Canon… it’s a prequel to Episode 4, but not part of the three other prequels. So there are a lot of characters who were never heard from before or after. So let’s give this to K-2SO by default.

Solo – A Star Wars Story: Not a character, but it’s gotta be young Han Solo’s Speeder, right? Sure the Millennium Falcon is the coolest spaceship of all time, but what piece of junk did Solo pilot before that piece of junk? Also, the rocket engines in the back look like the taillights of a 1960s Ford Falcon. That’s the kind of loving detail that makes the Star Wars saga so great.

If you have other suggestions for the most significant collectible from any of these movies, please let us know in the comments!