Hey, kids! Do you relish the opportunity for a job that lets you ketchup in your career? Oscar Mayer is looking for Wienermobile drivers, but only if you can cut the mustard! Okay, terrible buns… er, puns aside (and repeating them frequently is part of your duties), it’s quite frankly a fun job. Side note… yours truly was a candidate for this very gig in the early 1990s, but I got roasted in the interview.

In any event, the Oscar Mayer Wienermobile is an enduring icon of promotional stunts that has been loved for decades. There are actually several of them that roam different regions of the country. As big as that fleet is, there are even more Wienermobiles in smaller, collectible form.

Wiener Whistles –  The earliest Wienermobile collectibles were whistles, given out to kids at promotional appearances. They are usually molded in the red “meat” color instead of the tan “bun” color. They have a couple of small holes that can be covered to produce a few different tones. There have been several variations over the years including a sort of pan flute version made of a pack of hot dogs (technically not a mobile sausage, but let’s go with it) that offered enough notes to play the famous jingle, which is now stuck in your head!

Banks – After the whistles, the earliest Wienermobile models were plastic banks… well, sort of. Starting in the 1950s, there was a 1/25-ish scale model molded in a bun colored base and a meat-hued sausage. And as it rolled, a flat sculpture of Little Oscar bobbed up and down from a slot on top. Later releases of the same model ditched the driver, with the slot now serving as a place for your savings deposit. Banks have been updated with recent designs in the real fleet, so there are several different generations available. One thing they have in common… most of them are unbranded as far as what toy company produced them. They are simply “Oscar Mayer” offerings.

Hot Wheels – One of the rare exceptions to the unbranded mass-produced tube-steak vehicles comes from Hot Wheels. The first variant from 1993 was accurately colored, as most have been since, but there have been a few exceptions. A silver chrome version came out the next year. Also, NASCAR themed variants, while featuring correct body colors, have displayed different graphics and logos. The rarest Hot Wheels variant is likely the Micro Vehicle version from 1996. This short-lived series of half-sized cars was designed to compete with Micro Machines. It’s like one of those delicious cocktail wieners in that red sauce your parents used to serve in crockpots at parties. (And no, this one doesn’t count!)

Christmas Ornaments – Another example of a branded Wienermobile is the Hallmark Christmas ornament from 2001. Accurately scaled, it’s a nicely detailed model and with a push of a button, plays that jingle. There have been other, more traditional ornaments, usually unbranded as well. 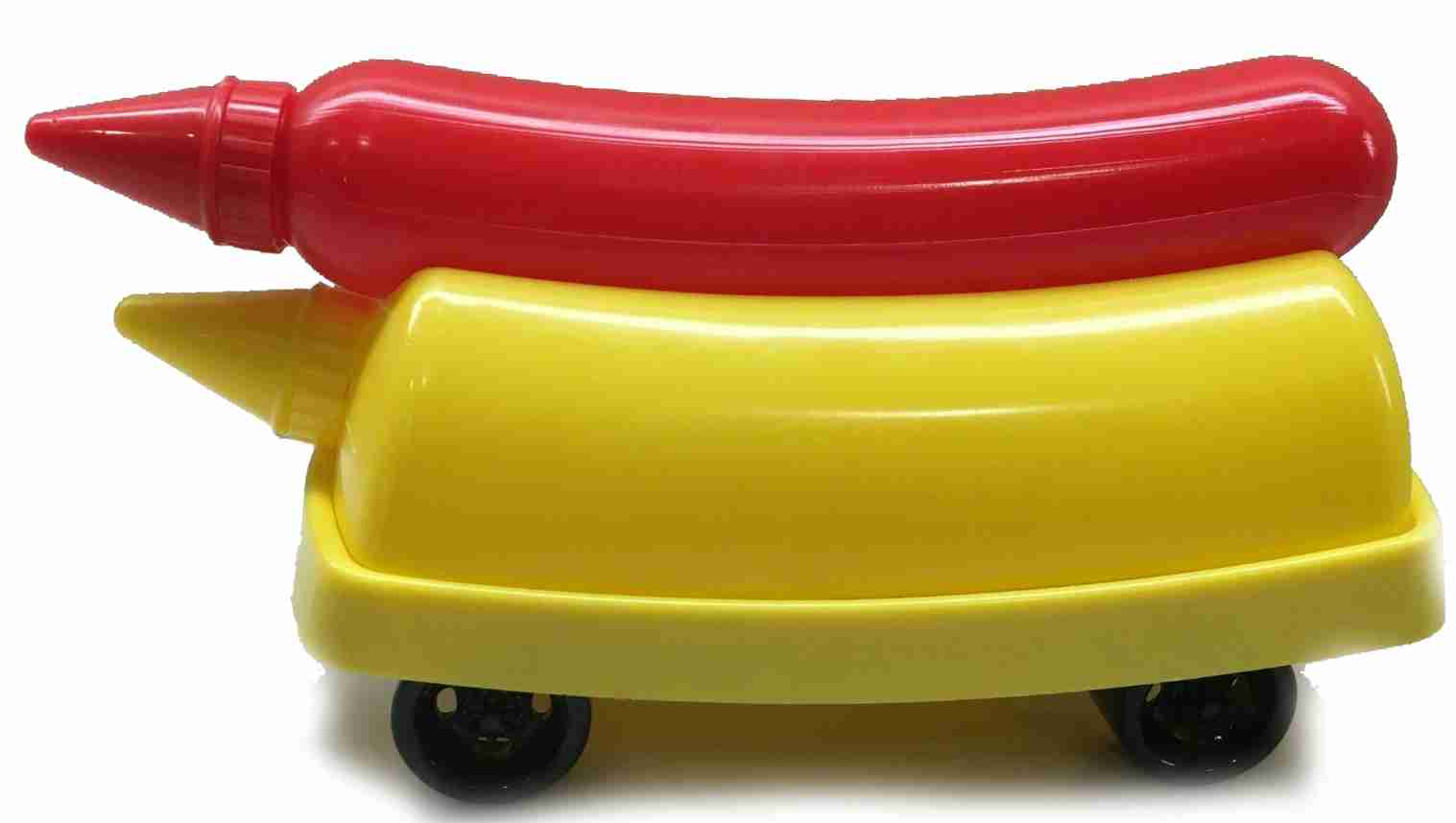 Condiment Dispensers –  One of the most abstract Wienermobile models is this ketchup and mustard bottle set. The red top holds 4.5 ounces of ketchup, while the yellow base holds 11 ounces of mustard. (If you’re from Chicago, that ratio should be NO ketchup ever and ALL the mustard!) Functional and delicious! 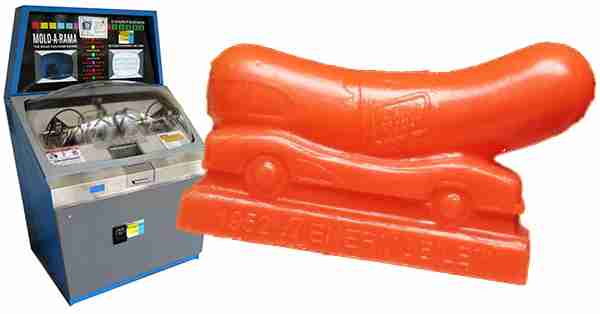 Mold-a-Rama – This collectible brings back the smell of childhood for a lot of collectors. No, not the aroma of hot dogs on the grill… the scent of hot, waxy plastic, fresh out of the Mold-A-Rama machine. Insert your money, watch the gears and gizmos crank, and take in a whiff of the still-hot plastic toy that pops out. These machines were first made in 1962 and appeared mostly in the midwest and Great Lakes area. Several of these technical marvels are still in operation around the country including ones at the Field Museum and Brookfield Zoo in Chicago. And despite the last machines being manufactured decades ago, new molds are occasionally installed, including one for the 1952 Wienermobile at the Henry Ford Museum in Dearborn, Michigan.

If you meat Oscar Mayer’s requirements and can take the intense grilling of the interview, you should apply for the gig driving the Wienermobile here.

And if you want to see more, or know of any collectibles we don’t have in our database, this is the link you’re craving!

I remember riding in the real Weinermobile once years ago.  Way cool and the collectibles are extremely cool and fun.!