Black Sands Entertainment the latest to join the hobbyDB Archives!

Co-founded by husband and wife duo Manuel and Geiszel Godoy, the Black Sands Entertainment team is taking Hollywood by storm by staying true to the African American story. “For the last 35 years, Hollywood has invested in 135 films about ancient civilizations. Of that, only one was about African Civilizations. That’s a huge problem in our community, but also a totally missed opportunity” says Manuel Godoy, Author and President of Black Sands Entertainment. “That’s why our community has been asking specifically for Black fantasy, Black history, mythology and all that stuff. Anything that shows us in a positive light.” 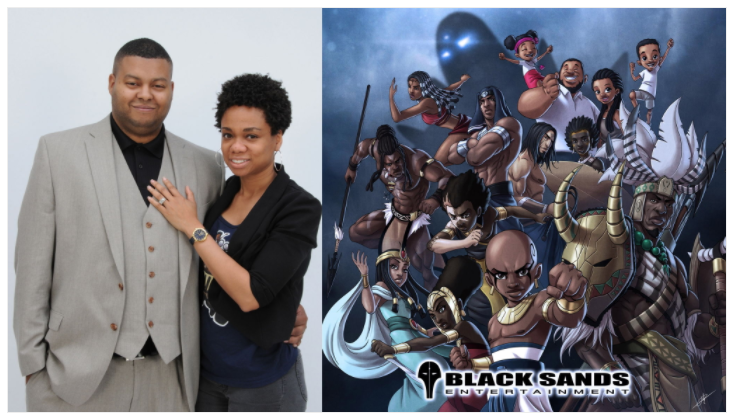 And shine a positive light it has! In 2016, Black Sands Entertainment published its first comic book series called Kids 2 Kings. As their popularity grew, the company started to secretly work on two additional series titled Sons of Nibiru and Mori’s Family Adventures.

After a successful Kickstarter campaign, the company took its message to the masses and within 120 days, they sold over 10,000 books to African American families all across the country. In 2017, the company was named the 4th best indie comic series of 2017 by Bleeding Cool. The company also has an incredibly popular YouTube channel with more than 50,000 subscribers.

So what’s next for Black Sands Entertainment? “We want to successfully launch our animated properties, distributed through our mobile app, and have 4 million users” says Geiszel.

Black Sands Entertainment is one of the first animation studios to join the hobbyDB Archives. “It’s great that we can start archiving our products so early. This will make it much easier for our fans to organize their collections today and in the decades to come as we continue to build our empire,” said Manuel.

Check out the Black Sands Entertainment Official Archive Here (and like it to be kept up to date with new entries!).