We’re excited to say that we’ve just finished some long-standing development work on hobbyDB meant to make the database much easier to use. It is now possible to deep dive into the smallest level of details of your favorite items (as often the smallest detail can make the biggest difference when it comes to collectability and value), while also being able to quickly scan the higher-level information at a quick glance. Technically, it’s like creating an organizational hierarchy for your favorite brand by using the following – Brand, Series, Subseries, Variants and Subvariants. To demonstrate, here is a perfect example, the 2013 released Hot Wheels Kool Kombi.  As always, let us know if you have any questions, and we’d love to hear your feedback on this new site experience.

Next step down is the series, here Hot Wheels Mainline series  –

Moving another step further down, a subseries is created when there are two or more series that are both part of a larger series.

For example, that first Kool Kombi variant was part of the 2013 HW Showroom – The Hot Trucks series and the Mainline 2013 series, which are both part of the Mainline series, making them Subseries  –

The next level down are models and often variant groups. Variants are created when you have the same item, but it has clearly distinguished differences (i.e. a green vs. yellow car).

Hot Wheels made many more variants of the Kool Kombi in other colors and other decals. At the top of the Kool Kombi variant overview page, you will see a new section that allows contributors to add some history of the casting as a whole  –

A subvariant is created when you have an item that looks the same as another item with only tiny differences i.e. a packaging variation/sticker variation or something that may be harder to see, such as a text change on the back of a pin, a model car interior, or color of its baseplate. Most likely the company producing the product considers these subvariants the same model.  You can read more about the subject and how they are created here.

First issued in green and a Hot Wheels deco in the 2013 Mainline range, there are two card variants of this Kool Kombi. In this view, you can see at a glance which details make each of these subvariants different (i.e. International long card vs. U.S. long card). 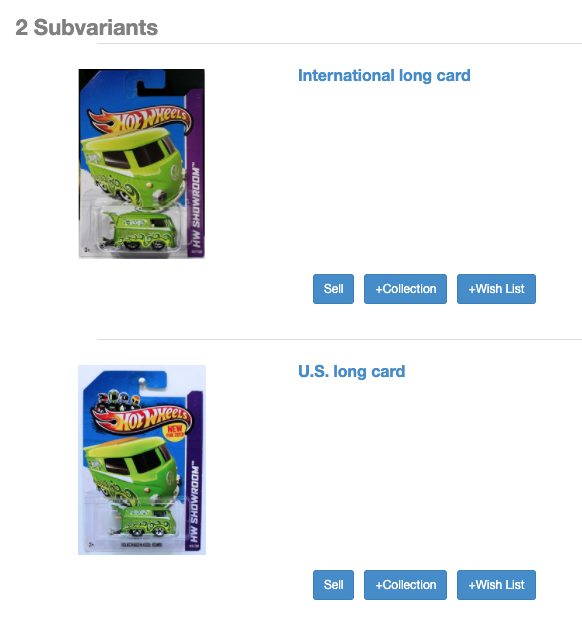 While sometimes a level or two such as Subvariants and Subseries are skipped, this framework seems to apply for all kinds of collectibles that we tested. And while we still have some work to do (for example sorting by year within series or allowing filtering by production type (such as prototype or custom) we feel that structurally, the database part of hobbyDB is now finished.  Let us know what you think in the comments!