A Collection of Advertising Fans

The book from 1986 by Susanna Johnston and Tim Beddow shows some collections of British collectors that still amazes 35 years later. We plan to share some of them here.

The writer and broadcaster lives at Limehouse with her third husband, film director Frank Cvitanovitch, in an early Georgian sea-captain’s house which commands a spectacular view over the river to the Surrey and West India Docks. The only disadvantage to this otherwise unrivaled position is the lack of privacy on the riverside. Tour leaders guiding visitors through London’s waters, can be heard announcing. “That is where Janet Street-Porter lives”, as they point in the direction of her balcony.

Janet Street-Porter spread her fans out on a 1927 walnut veneer table (part of a suit made for Jack Cohen, Tesco’s owner

Janet Street-Porter already had twenty years of collecting behind her when she bought the house, which is dominated by her interest in art deco, the fashionable style of the inter-war period. Her husband, at the time of their marriage, had thirty years of collecting blue-and-white china, Napoleonic swords and military watercolors behind him. They got rid of the swords and found that the blue-and-white didn’t go with art deco, so that stays in their country house. Their next joint collecting venture is to be built round Victorian Gothic.

As an offshoot of art deco, Janet Street-Porter has collected advertising fans since 1966 when she went to an auction at Christie’sand coveted a shoe-box filled with them. Bevis Hillier (whose book on art deco she had given “a really bum review”) topped her bid and she was very close. Later, to her astonishment, he went round to her Chelsea flat and presented them to her. “He’s that sort of person. Very spontaneous. He said that I should have them. That was how it all started. There were about five fans in the shoe-box and since then they’ve been exhibited in Minneapolis in the first really big exhibition of art deco in America.”

Janet Street-Porter joined the Fan Circle for a bit. It is a group of rather up-market ladies who collect fans, but only about half-a-dozen members collect advertising fans. These are absolutely the only fans that interest her. One of the reasons why she left the Fan Circle was because it was too closely connected with major auction houses, so that “what started as a nice little thing got a bit ominous, and fans began to go for way over what they were worth”. It’s difficult to find bargains in England now, but oddly enough she has bought several in America and Australia.

The fans constitute a collection within a collection and, as the decor of her house, she doesn’t restrict herself strictly to date but goes for what she calls a “certain look”. All the fans have been made for specific events. Stores such as Galeries Lafayette would have, for instance, a “Fur Week”, and fans would be printed as give-aways. Others have come from Paris hotels, Frascati’s, Zandra Rhodes and Royal College fashion shows.

The fans are extremely fragile and people are tempted to handle them. The idea is to have, one day, a black lacquered room where they can be more easily seen. 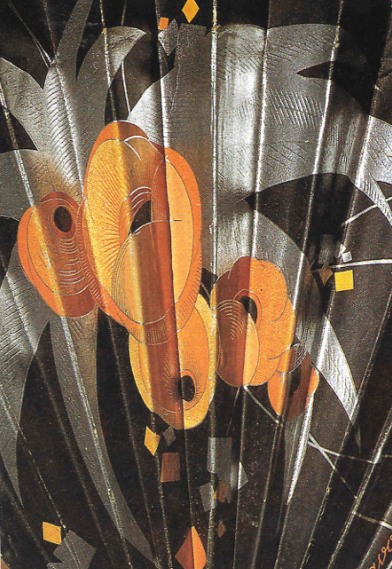 She only bothers to sleuth the earlier fans. New ones “just come along” – sometimes as hand-outs on airplanes. She will only buy a fan if it is in excellent condition. The same rule applies to everything in the house. She cannot bear anything to be out of place and hates smokers (although she does love ashtrays).

Among art deco lamps, screens from Derry and Toms and cushions covered by herself in Zandra Rhodes cut-offs, friends can walk warily over a brightly colored carpet designed by Patrick Caufield to look like a swimming pool. Pictures on the wall are modern and painted almost exclusively by artists she knows: Jim Dine, Alan Jones, Caulfield and Hutto.

She fiddled with Susie Cooper pottery pieces on a table behind the Eileen Gray sofa (color faded by the sunlight that battles through double-glazing). One or two objects were out of place. Everything has line up. “It’s a bit worrying to be like that, I know,” she confessed, flashing a toothy smile. Were it not that words flowed from her lips in such an uncontrived and friendly fashion, it might have been tempting to wonder whether her inimitable cockney accent is assumed.

As in the case of many collectors, space is a problem. Besides being immaculately tidy, Janet Street-Porter is a terrible hoarder. The kitchen, leading from the sitting-room but entirely disguised by splattered cream and orange paint which looks like the shell of a tortoise or the coat of a leopard, absorbs a mass of art deco teapots which mostly came her way as presents from friends after her book on British teapots was published. Other objects are kept in the cellar: “It’s like an old people’s home down there… lots of things just resting.”