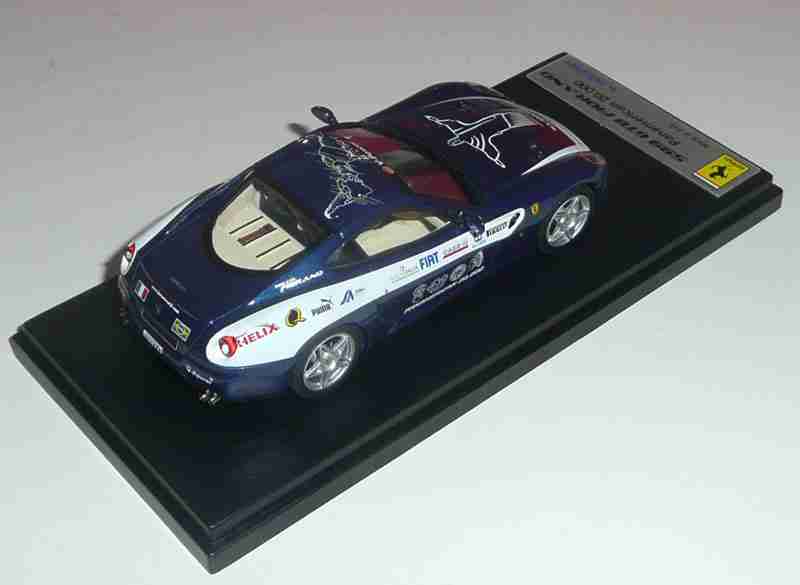 Welcome back to our series looking at some of the Ferraris you might not have heard of – and the models made of them by Looksmart! This week, it’s the special edition 599 GTB Fiorano Panamerican 20,000

Popular opinion often has it that supercars are fragile beasts, unsuited to daily or rough driving. However, this myth has certainly been shattered several times over when you look at the long-haul, high-profile driving events Ferrari has put several of its cars through over the past few years –  including the Panamerican 20,000 in 2006.

On August 24 that year, a pair of Ferrari 599 GTB Fioranos set out from Brazil to New York, covering 20,000 miles of very varied terrain. With 50 international journalists taking their turns at the wheel, the 15-stage tour took 84 days to complete, with the cars finally arriving in New York on November 17th, 2006. The event followed 2005’s “Ferrari 15,000 Red Miles” tour of China by two 612 Scagliettis, and the world tour undertaken in 1997 by an F355 to mark Ferrari’s 50th anniversary, which took the car around the globe, starting and ending in New York: departing on March 18th, it arrived back there 75 days later.

The Panamerican 20,000 saw the two 599s driving the hair-raising clifftop roads of the Andes and the dirt tracks of Central America, covering a route that wended its way through areas of huge Pre-Columbian and Native American historical importance, stopping off at the beaches of Rio de Janeiro (home to many other Ferraris!) and Sao Paulo, before continuing on through the tropical rain forests of Curitiba. The cars then went on to the Argentinean pampas, the salt plains of Chile and Bolivia, the dirt roads that took them on to La Paz and Lake Titicaca, the world’s highest-altitude lake at 4,000 metres high.

Driving on into the Inca territory of Peru, the cars crossed the sacred valley of Cuzco, the peaks of Macchu Picchu and the lines of Nazca. Coming back down to sea level, they drove on to Lima, through Ecuador, Columbia, Panama, Costa Rica, Nicaragua, Honduras, El Salvador and Guatemala. A stop at the ruins of Palenque preceded a pass through Mexico City before the cars went on into the USA via Baja, California, home to the famous off-road races. After that, it was back to the freeways, as the Ferraris travelled from Los Angeles (another area of high Ferrari population!) to Houston via Monument Valley, then on to Miami (yet another place the 599s would have had plenty of prancing-horse-badged company!) and Washington. From there, it was a short(er) trip to Chicago, before a brief detour into Canada took them to Toronto, then back down to New York City. 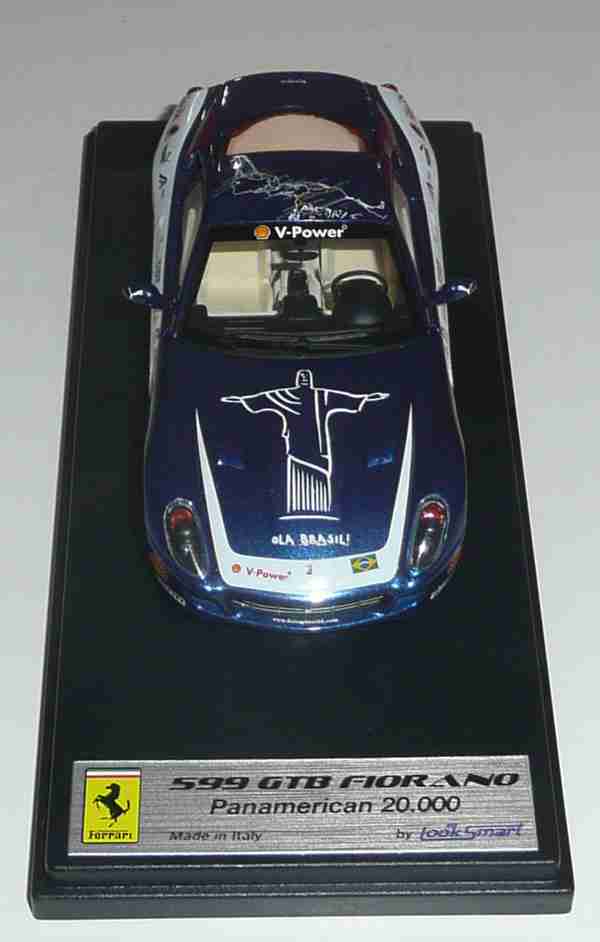 The two Ferraris used were finished in red and blue with special “Panamerican 20,000” livery striping and a striking rendition of Rio’s world-famous Christ the Redeemer statue on the bonnets, likely the most unusual bonnet decor that has graced any Ferrari ever! The LookSmart offered a model of the blue car, complete with full and authentic decoration. If you want the red one, Fabbri made a nice model of that version.

As a diehard FORD supporter, I have always looked at Ferraris with a jaundice eye. Perhaps my American spirit has always been “we can do better”.  Perhaps it is just the fact that I could never reach the cost of Ferrari ownership.

Through the years I have owned many different marks including Jaguar, Bentley, Porsche and all makes of AMERICAN manufacture. With due respect and appreciation of all automobilia , I have enjoyed this series of articles about Ferrari immensely. Excellent picture support and links have thoroughly kept my interest. Thank you for the excellent work.