David has been a life-long fan of fast or otherwise interesting cars. He is also the creator of the unique Essence of the Car model range and hosts an official archive here on hobbyDB.

The Essence Of The Car started out more or less by accident. In 1994, I began work on creating the powertrain for a special four-wheel-drive supercar for a private collector. As the project progressed, it seemed sensible to gather together scale models of other supercars, by chance, all to the scale of 1/43. As time passed, it also seemed to me that I should have a model of the new car, built to the same scale. To add a serious level of complexity to this idea. I would need to be able to make replicas!

Fortunately, the CAD lines for the body were available, so work began. However, this took longer than anticipated but eventually, I had the body carved out, made from jelutong which is a lesser-known Asian species that’s appreciated for its uniform appearance, softness, dimensional stability, and ease of carving. The wood is used in much the same way as Basswood and was a popular choice of material for pattern makers. It was also a source of natural latex which was used for the manufacture of chewing gum. Pattern makers have long since abandoned jelutong in favor of the synthetic model boards, which is what I have been using since around 2000. Again, I have been fortunate to have had a good source of supply of this material. 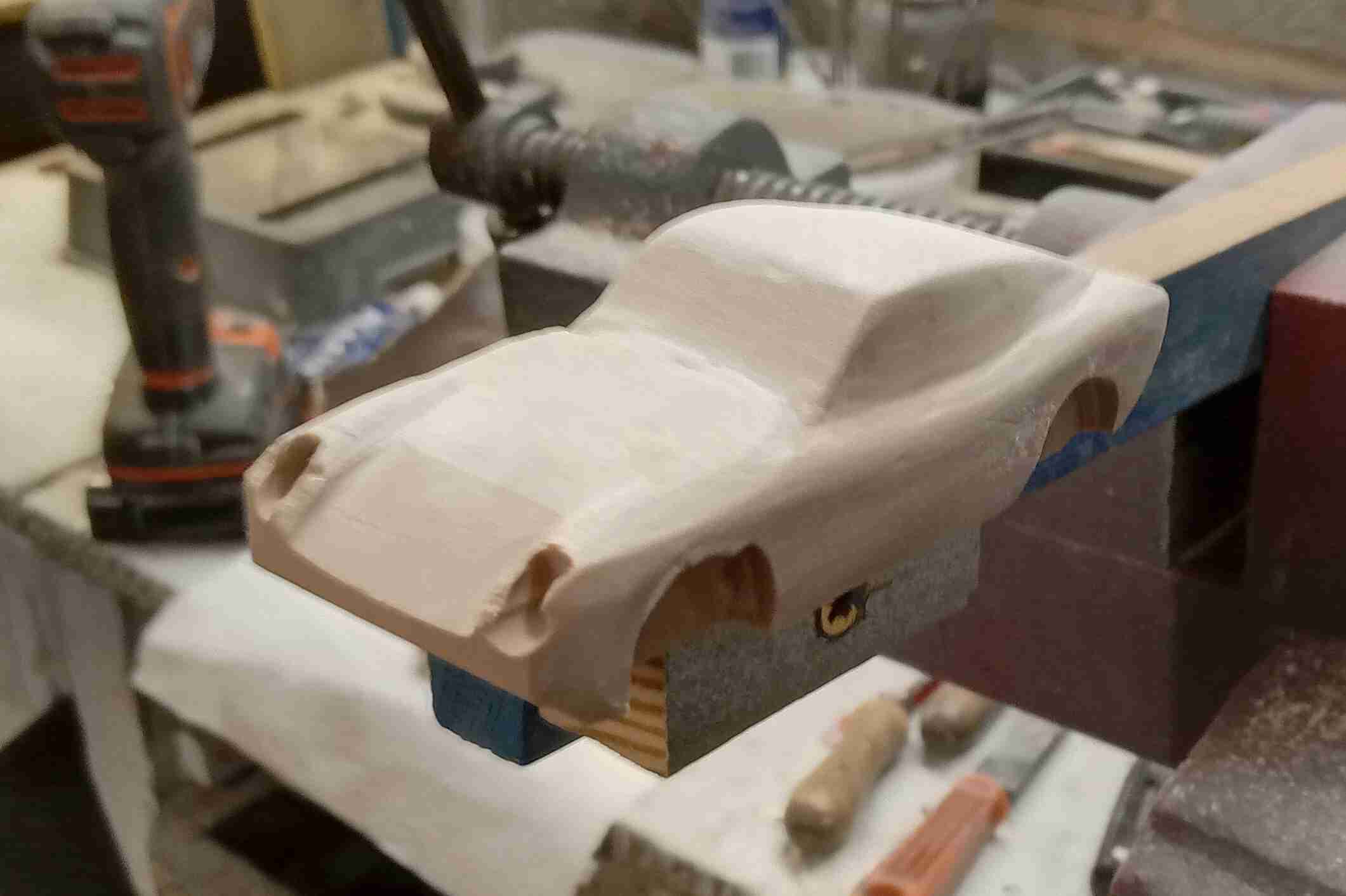 All the master models are made by hand using hand tools and small power tools plus the application of P38 body filler. The workpiece is mounted on suitable support that can be held securely in a vice.

Whilst I was trying to get the shape of the supercar sorted out, I managed to find drawings for a large Bentley saloon car, so decided to have a go at that whilst waiting for finalized body details of the supercar. The Bentley was actually completed first, but I needed to work out how to make or otherwise obtain suitable wheels. After a while, I found a supplier of replacement parts for old diecast cars and bought some samples from him. I tried a set of wheels on the Bentley and although they fitted fine, the appearance did not work with the relative simplicity of the rest of the car. 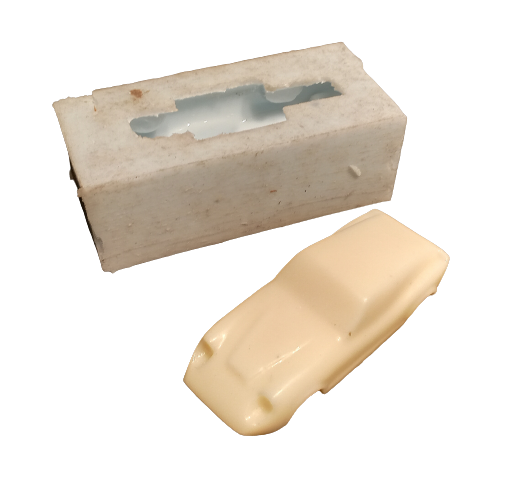 Having got a master model finished, I still had a long way to go to achieve the end that I had planned. Fate once again gave me a helping hand at this point because I was exploring how to manufacture some plastic parts for the full-size car’s suspension system. This brought me into contact with a local supplier of industrial molding products and after several false starts and with advice from the supplier, I found the answer to my replication dilemma. I would use silicon rubber for the mold and polyurethane resin for the finished cast parts.

After that, I was able to make copies of the original master model. As the body had started to take shape, the wheels were the next problem. Proprietary wheels would not fit with the simplistic approach of the body. So, the wheels and tires had to follow the same approach. The wheels and tires would be made as separate parts, the wheel centers being simplified to the swept section of the wheel while the tires were reduced to simple rings of an appropriately sized section.

Now that the methodology had been sorted out, the next phase was to set up some workshop equipment to facilitate the process. Over a period of time, workshop equipment was been obtained. The main items are bandsaw, lathe, pillar drill, vacuum chamber and spray booth plus the ever-growing range of simple hand tools, often modified, especially from a suitable stock item. Most of these are self-explanatory, but a vacuum chamber is an essential tool for degassing the resin etcetera to remove trapped air before pouring the material.

The first models were produced in around 1996 and tended to be of a relatively easy form and of closed cars. Eventually, I was asked to make a model of a TVR Chimera, which is an open car. 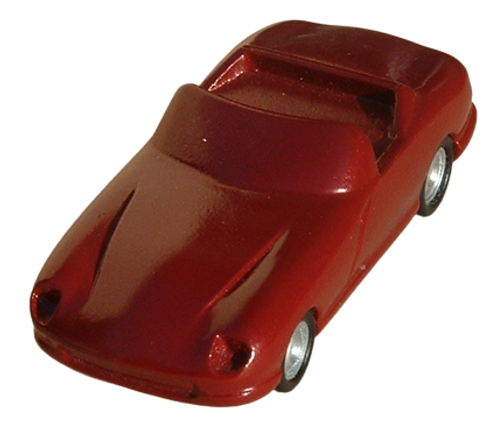 I cheated a little by just leaving a recess where the open cabin was situated. This method continued for a while, only being needed a few times until eventually my confidence improved and I started to include a simple interior. To begin with, I just molded the seating in position but now the seats are made as separate items as is the folded hood if applicable. 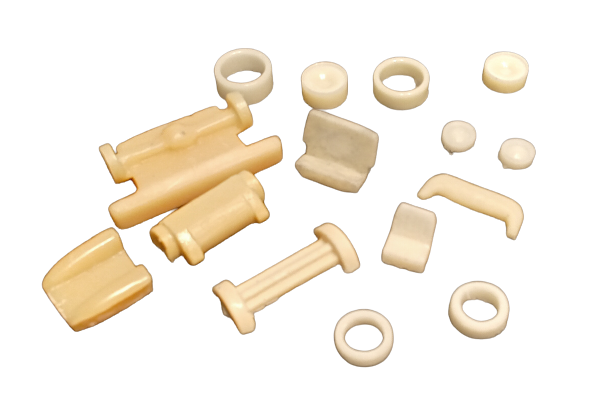 This method has been used several times since. Over the years I have refined the process even more. I was asked to produce a model of a 1927 3litre Sunbeam belonging to a very good friend. 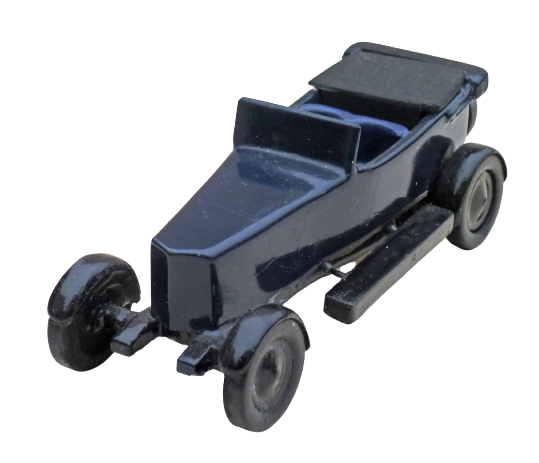 This is a car with separate front cycle type mudguards, open seating and some exposed chassis detail at the front. The presentation of the cycle-type mudguards proved to be quite simple. All I had to do was create mudguard and tire masters and then combine the two into one molded part. This project gave me another problem to solve. Because of the arrangement of the front of the car, I was presented with the problem of representing the front axle which is open to general view. The resin that I use is hard but quite easily broken if cast into small sections which was the case with the axle. In order to build in some strength, I came up with the idea of using a wire insert and I chose to use piano wire because it is strong and very stiff. This wire was also incorporated into the forward-facing chassis side members. Also shown in this photo is the combined running board and toolbox. Again, this item was cast separately with two small indents for use as a drilling guide. Matching drill guides were added to the chassis part of the main casting and all that was necessary was to drill small holes and fix the running boards on with piano wire.

The use of wire for small details and reinforcement has been used quite extensively as the range of models has grown. For example, I recently added a model of a Charles Deutsch’s Le Man car to the range. 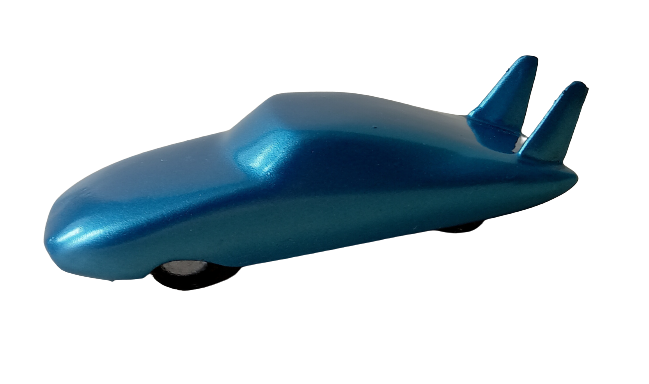 This car has a pair of very prominent fins at the rear and I was nervous about removing the model from its mold without damaging the fins. Therefore, a suitably shaped wire reinforcement was added to the fin elements of the mold, and this proved to be successful.

Yet another and more extreme example of wire reinforcement occurs with the Farman A6 Saloon. 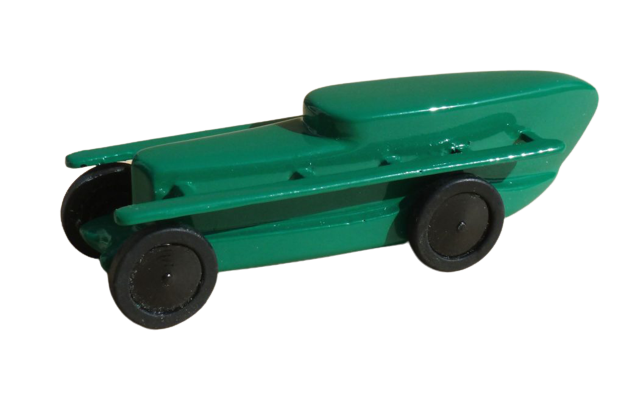 In real life, this is a very bizarre-looking machine with a rather prominent mudguard arrangement which is hung alongside the body on five outrigger arms. To solve this problem, I decided to solder a wire armature together, which would then be laid into the mudguard mold before pouring in the resin. Allowance was made on the arms to facilitate insertion into holes drilled into the body using cast in drill guide insets. Careful use of a filling adhesive ensured a clean-finished surface around the junction between the arms and the body.

One more challenge that I should mention is a commission from another friend to make a model of his Lea Francis 16/60, which is the only example of this car left in existence. 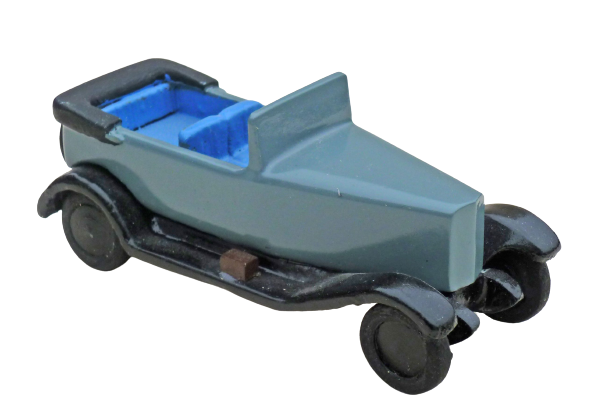 This car differed from anything I had made before by having full-length flowing front and rear mudguards connected together by a running board. This feature combined with a front and rear axle arrangement, which would be below the casting level of the body, caused a bit of thought, but all was solved. The two-axle units could be cast separately in the usual manner but the mudguards and running board were a different matter. In this case, I resorted to making a master model followed by a suitable mold and manufactured this part of the model using glass fiber tissue and polyester resin. In this example, the seats and hood are all molded as part of the body but the small battery box on the running board is a separate part.

As time has passed by, and you will now have realized that I have been making these models for twenty-five years, my skills have improved and my confidence of what can be achieved with such a simple process has grown out of all proportion. For example early on, if a car had quite pronounced separate headlights, I chose to leave them off to avoid a clumsy mounting arrangement. However, on some later models, the subjects have headlights which, whilst being separate, are quite closely mounted and can be incorporated quite tidily.

Quite early on, it was decided that I should have a website and my son came into the picture here as he has the skills for such a project. In the process, he asked me what the project should be called. We discussed my thoughts about how the models came to be as they finally turned out and he came up with the name that is seen today, The Essence Of The Car.

Essence, the indispensable quality of something that determines its character

Later when I came across this site I started adding my models here as well (and you can also buy models here).

The Essence Of The Car is a different concept in the presentation of scale model vehicles. Instead of the high level of detail usual in the die-cast ranges, the models present the vehicles in their basic form. All are made to the standard collector’s scale of 1/43 and each model carries a serial number and is accompanied by a certificate of authenticity. The range continues to grow.

The Bugatti Tank, a Cord and a Dubonnet

When I described how it all came about, I mentioned the full-size supercar and the intent to produce replicas of it. This did happen and copies were distributed around the team that was responsible for the full-size car. However, because the end product was a complete secret, the models will never appear online and neither will a model of the full-size car that I proposed to follow on but was never built.

My final word on the project is that it is really only a hobby, but one that produces interesting models that a few people around the world have caught on to. When I say all around the world, I have sent models to most of Europe, the USA, Canada, Australia and New Zealand. Not bad for something that came about by accident. 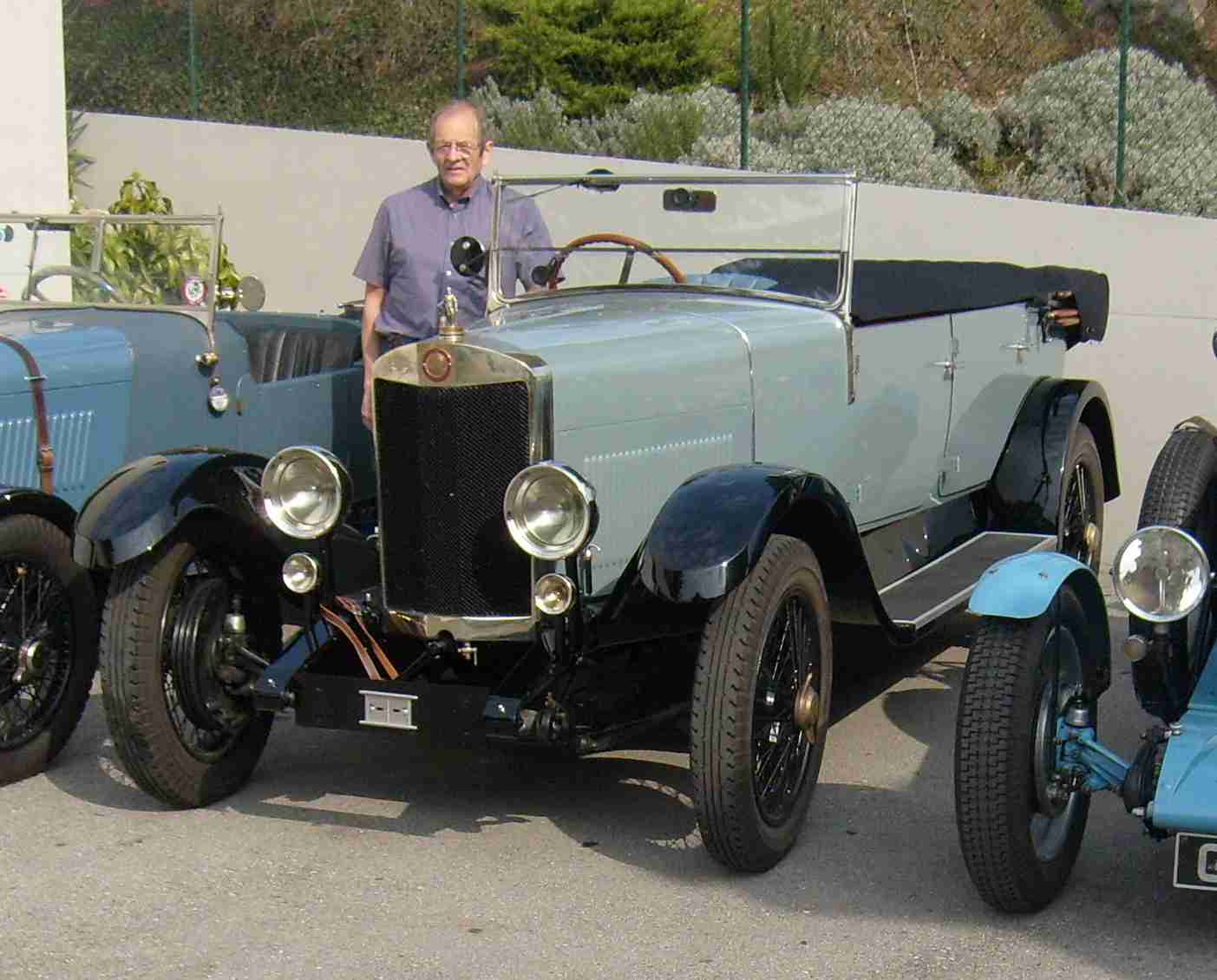 As a result of this aspect of my model-making hobby, I have visited Switzerland a few times and have met many nice people, all of whom are the owners of classic motor cars and all of whom I have enjoyed meeting a lot. If you know of a car that should be added to the Essence range then please tell me in the Comments!