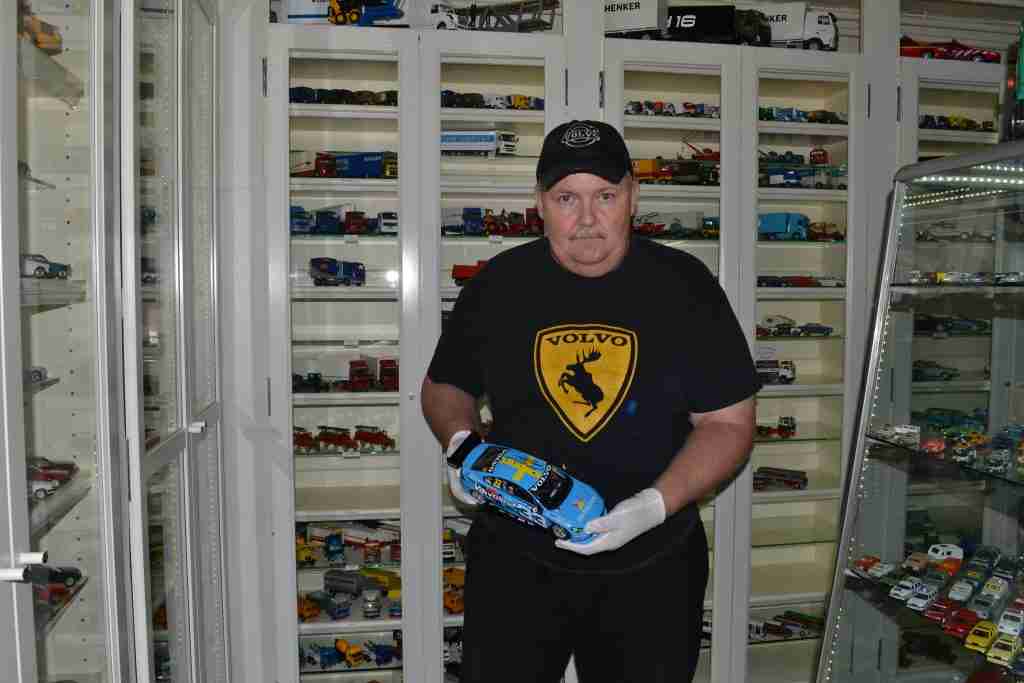 You don’t earn the nickname Tommi “Volvo” Frisker without being one of Denmark’s biggest collectors of all things Volvo…if not the biggest. Tommi takes some time to walk us through his Volvo Mancave, which is the careful procuration of decades worth of collecting. Check out his hobbyDB Showcase here!

I want to start by thanking Chris and his team here for this amazing opportunity to be a part of something this astonishing.

Everything began when my stepfather came into my life when I was just a young boy around the age of maybe 7 or 8 years old. He drove a truck which was a Volvo.

Whenever he came home from a long journey in Europe, normally there would be a model truck in his hands as a souvenir for me. He then quickly realized that Volvo was my favourite. 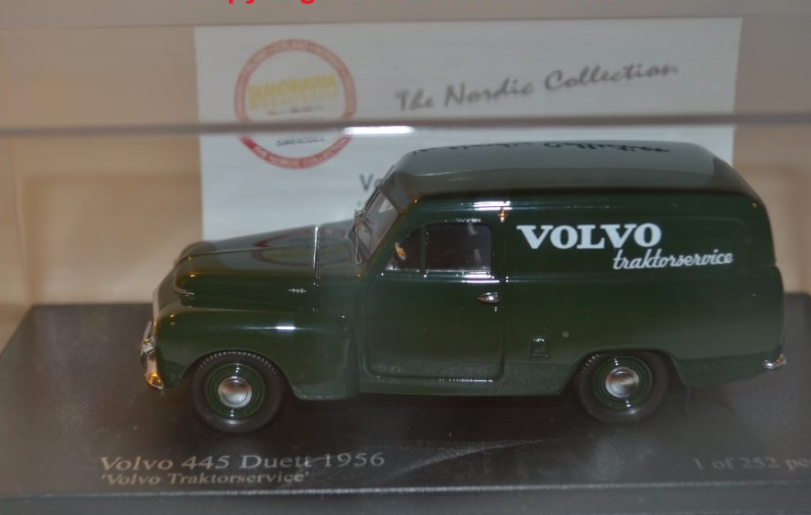 Unfortunately, I was not mature enough to properly take care of the model cars, as I played with them. When I turned 17 years old, it became another story.

I then got my first Volvo Amazon 1:1 car, and the interest for 1:1 Volvo and Volvo model cars really began. Besides that, I began driving a veteran Volvo and then again , the interest spiked even further. (Since then I have never driven anything other than Volvo cars.)

At the same time, it was the beginning of a number of Volvo clubs’ start-up in Denmark, Kolding Volvo Club which I was involved in the first meetings about the start-up of and, of course, I became a member of it, and could not settle for one club so I had to be a member of them all. 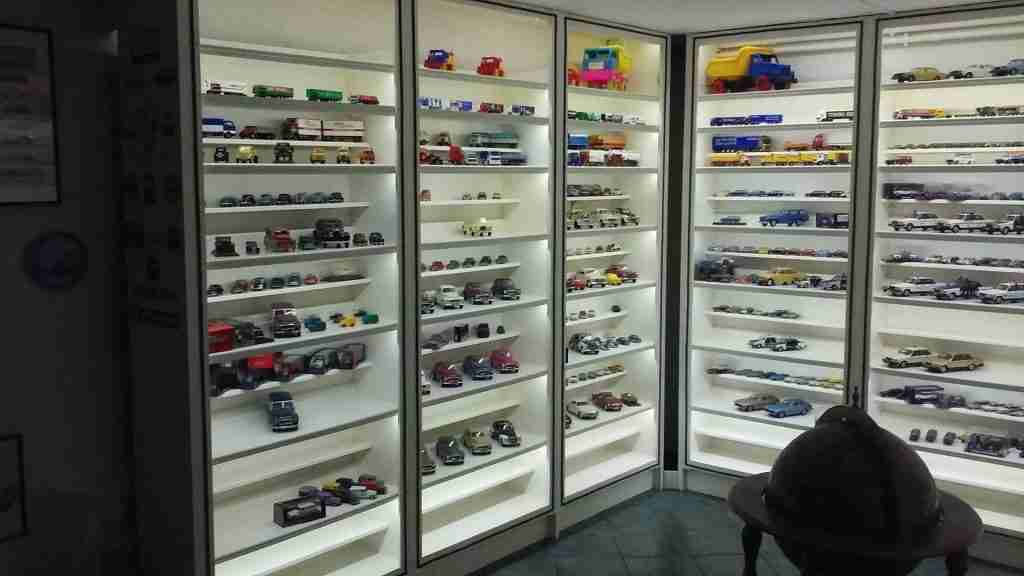 I was also involved in the first meetings about the start-up of Amazon Club Denmark and among the first members of it. As interest grew I also began to restore Volvo 1:1, among other things. Amazon, P1800, PV544 and PV444 etc.

I made Denmark’s largest Volvo Club, Kolding Volvo Club’s (KVK) first website and was their webmaster for 10 years. 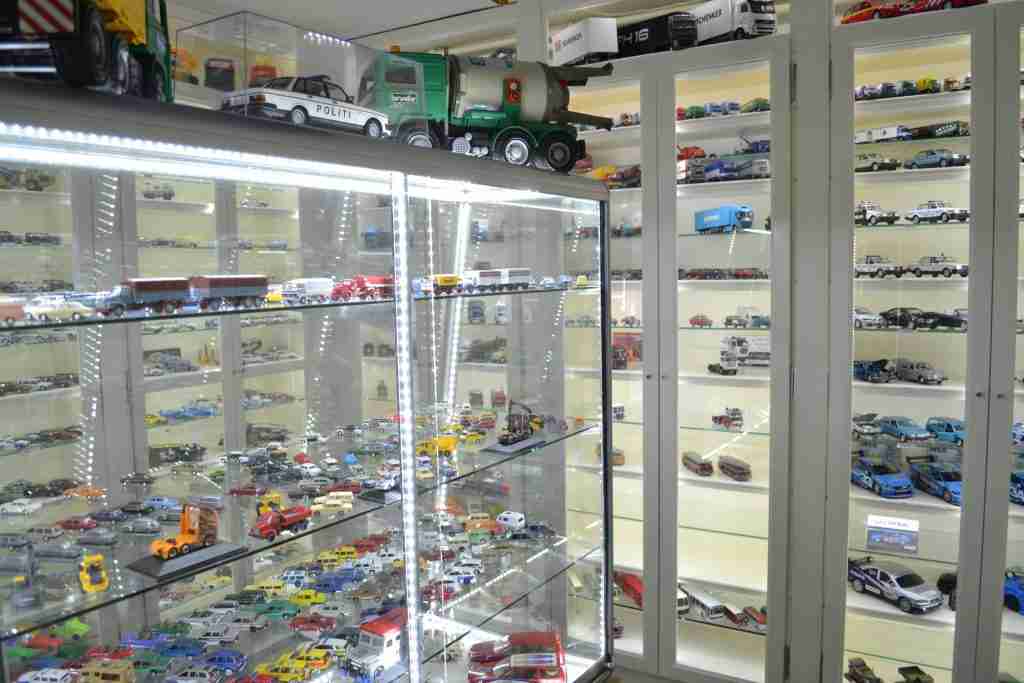 And at the same time, it was a must to collect Volvo’s model cars, but when I became Handicapped in 2016 and could not drive 1:1 Volvo Veterans any more, I had to sell my 1:1. I started a Danish Volvo Collector group on Facebook and since then it has just taken off with Volvo model cars.

It soon became so, if I saw a Volvo model car, I had to own it, no matter what.

The condition of the old model cars did not matter to me, as long as they were a part of my personal collection. If I ever got hold of a better car in better condition, it would be replacing the older one in bad shape. The older one would therefore become a spare model for restoration or it would get repainted (airbrushed) into another original colour, which I would always do myself as a hobby. 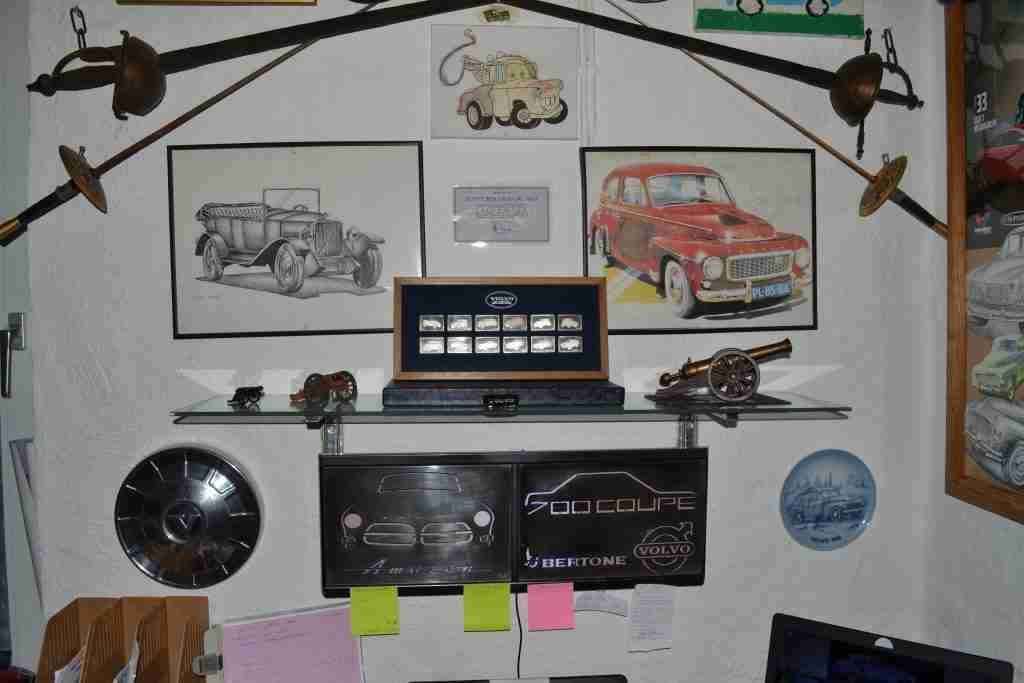 My wife and I never had the space or a specific place to store my model cars. Accordingly, the cars were hidden in moving boxes and were placed in our basement. I had always hoped and dreamed that someday, I would be able to build a showroom for my cars as a result they could be displayed like they deserved to be.

I finally got my garage split up in 2016, so I got a small room on one end, about 40 m2. Then I could finally get to store my Volvo model cars properly. The room has underfloor heating. The cars that I have been storing in the basement throughout the years finally got to be unpacked.

So when I came home from the hospital after a heart operation in 2016, my wife had set up several open cabinets along the walls and made a small office for me in the newly built room at the end of our garage, so I could slowly start and set up my many models.

That was the beginning of my Volvo Mancave. 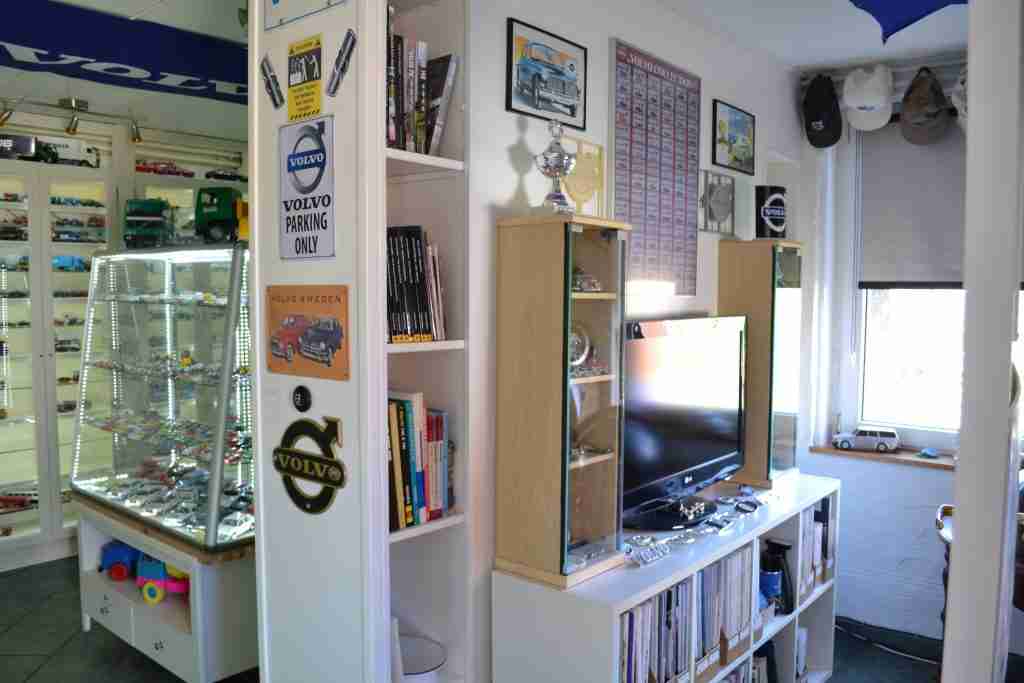 After two years of fighting with the authorities, I finally got my pension in 2018 because of my disability (got a back injury in Jan. 2017 some nerves have been damaged / cut in after a disc prolapse), and it became my mission to collect the missing cars from my personal collection.

Suddenly I had a lot of extra time on my hands, and as a result, I could immerse even more into my passion and expand everything even further. Expansion of my personal collection, my Volvo friend group through social media and even expanding the range of collecting. At this point in time, it did not matter where in the world I imported my model cars from Russia, Austria, China, Malaysia, Australia and many others. 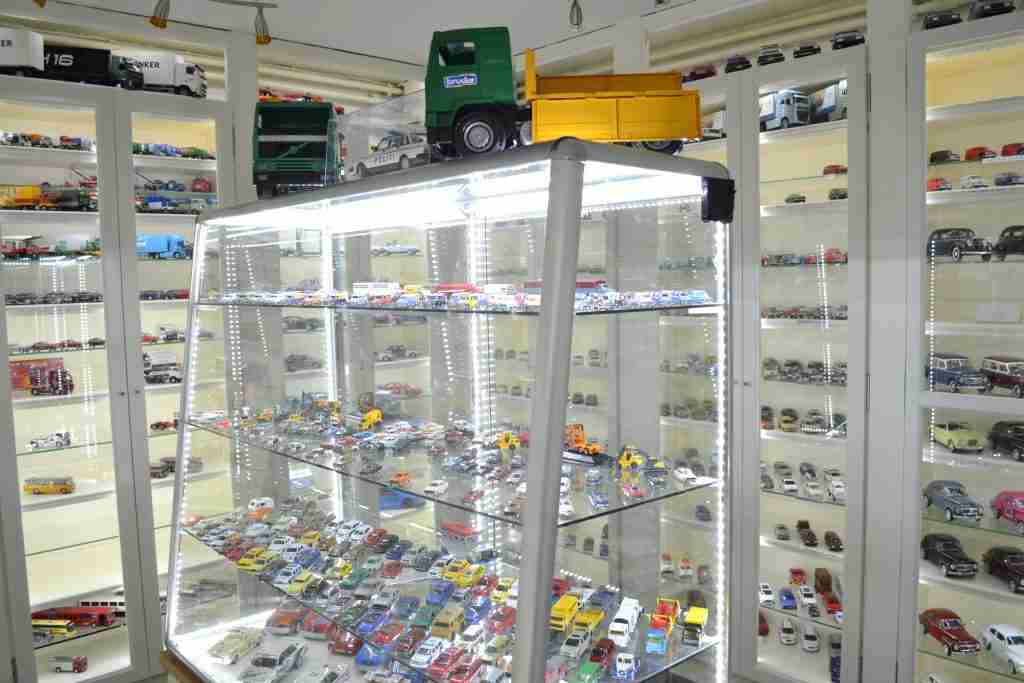 Trial and error were vital when it came to designing my showroom. Open cabinets were not successful due to dust and dirt, the open cabinets also made it easier for guests to touch and move the cars, which I was not exactly a fan of. LED lights also became a huge hit later on, when it became much easier to see all of the smaller details of the cars, since there were no shadows anymore.

In 2020, I decided to change the design of my showroom. The open cabinets were changed into closed cabinets with glass doors, and the number of cabinets was increased as a result of many more cars that were added to the collection. 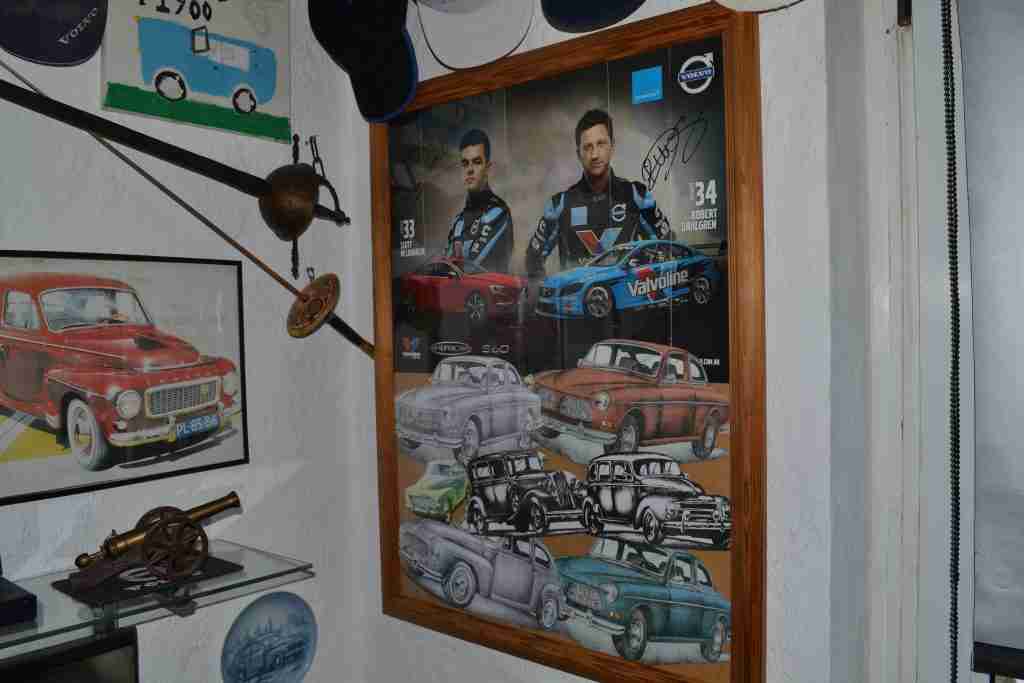 Personally, I have the opinion that my model cars should not stay in their original boxes, but should be shown off. When we finished the renovation of my showroom I suddenly realized that now I had to clean my almost 900 Volvo model cars in sizes 1:87 to 1:18 and even bigger.

Since then the collection has grown to around 1,200 models.

It is incredibly hard and almost impossible for me to choose a favourite car. It would mean that I would have to deselect other models. I would not say that I have a specialism towards any specific model of car or year of production, though I know something about all of them. 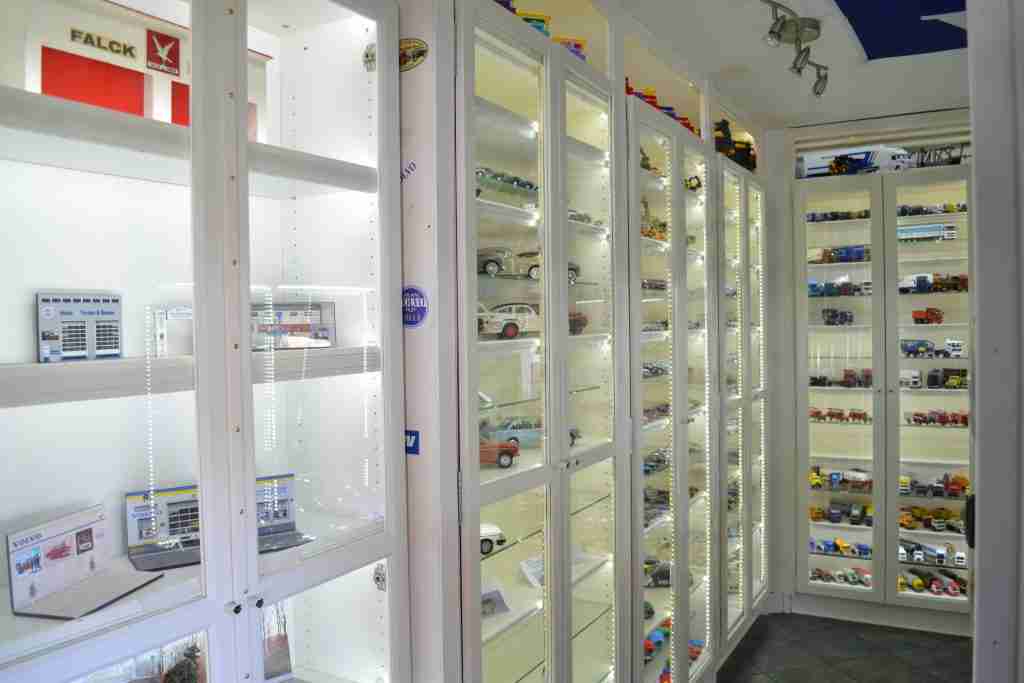 If I was forced to choose a favourite model, (I can’t) I would choose my Brio PV800 from the 1960’s which is an heirloom from my grandfather and my 2 pcs.: 1:18 APEX S60 Polestar´s which is signed by the drivers Scott McLaughlin and Robert Dahlgren, my 1:18 APEX S60 Polestar which has production number 002 Driver David Wall and my Volvo PV445 Tractor Service from The Nordic Collection / Trofeu 1:43.

After them, there are so many other fine and well-made models, including AUTOart 1:18 which have been several amazing cars. Another choice of mine would be 1:43 ROB EDDIE, Tinwiszrd, Tekno and the list goes on and on and not to forget all my homemade Code 3 models. 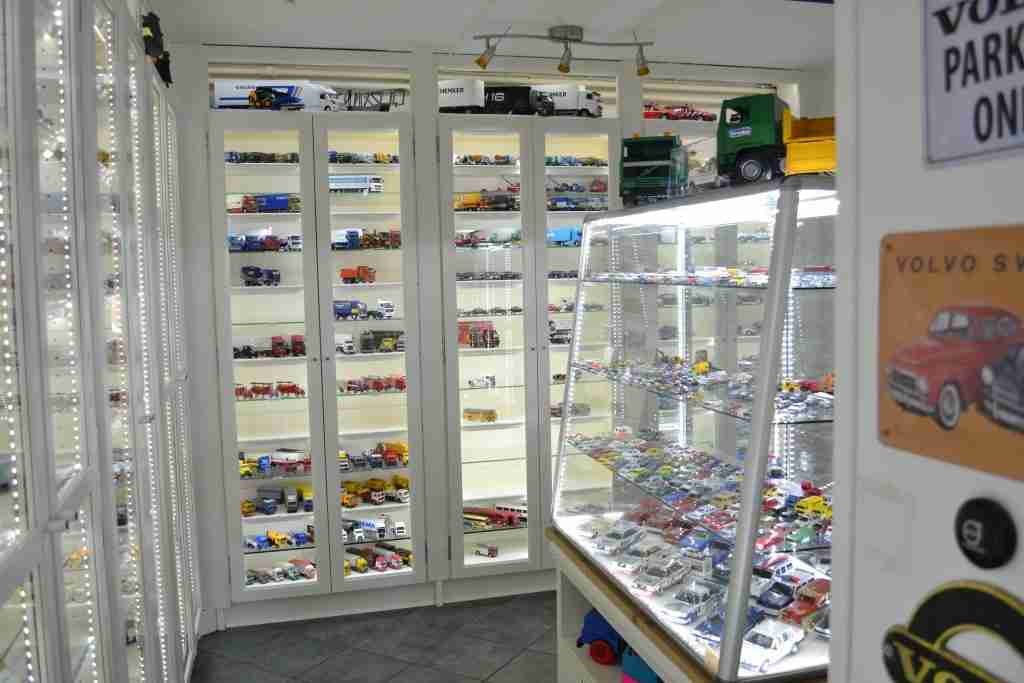 My favourite period for production of Volvo cars is anything from before 1996-1998’s, where the Volvo had more of a shape where as of today, all models start to blend together no matter the brand, Volvo, BMW, Audi etc.

The Volvo model cars which are the closest to me are the ones I have rebuilt myself, which later on became a really interesting hobby to me, because I could make my own cars and the ones I did not already own.

The models are such as “Grus Kalle”’s PV544 rally which is a true copy of the original “Grus Kalle” who drove rally. Other than that model, I also adore a PV544 Polis which is not made in 1:18 either. Therefore, there are several PV544 models which I have repainted myself since they do not exist currently in models. 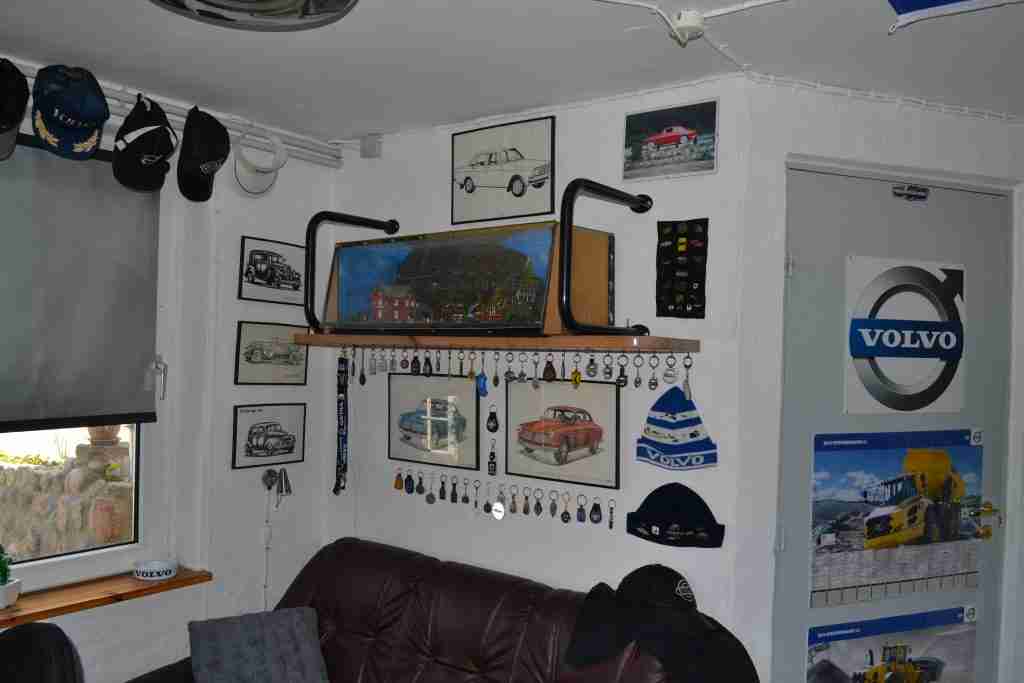 Even though my personal collection is nearly 1,200 cars, I have room to fit almost 3,000 – 4,000 in my showroom aka Volvo/mancave. For that reason, I am always searching for new models. The search or rather the hunt itself gives a kick, especially when they are tough to get.

So far, I have made the body of the car so it looks like the PV444 with the Duck’s tail which is made in the roof where the windshield is divided in the middle. 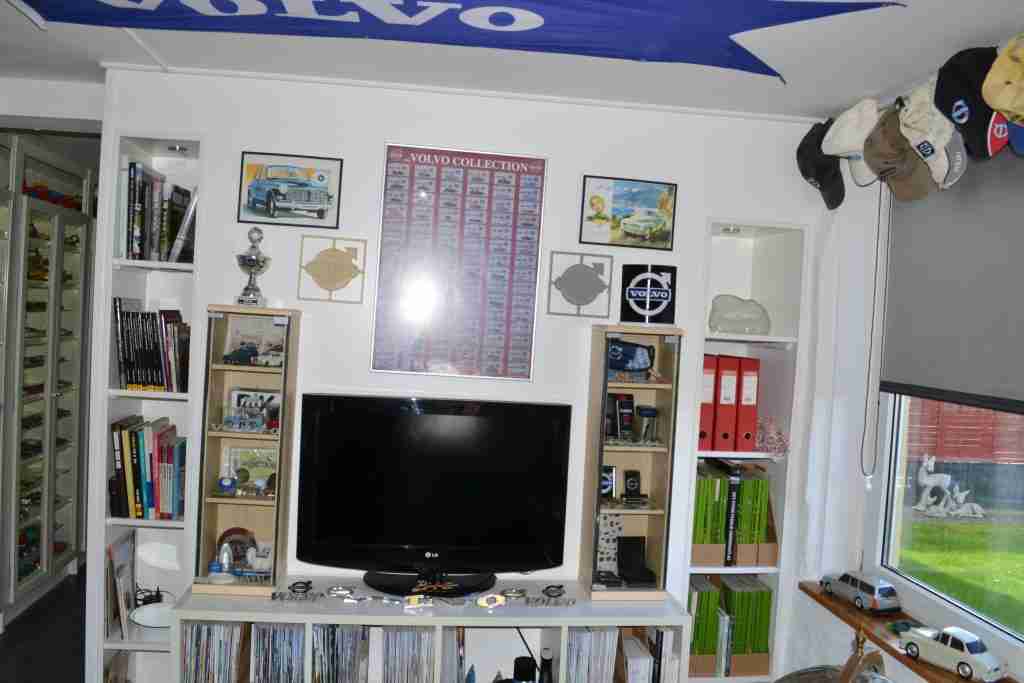 The front window has been made lower, side turn signals on the doors removed, two small windows have been made at the rear as in the early years. Taillights are cut away, seats are repainted in the right colors and with stripes.I have cast a bumper both front and rear, new front grill and a ^”Tagjög” for the roof etc. It is painted with the original PV444 color Dove Blue which matches the first PV444 of the ones with “Takgök.”

Besides these things mentioned, I also changed lots of other things. I expect it to be done by autumn 202…?

^Tagjög ” – Signal transmitter which was mounted on the roof in these years…only in Sweden.

My family and friends are both understanding and not understanding. They often joke about me being a Volvo lunatic, but they acknowledge that it is a passion of mine and that it is also an investment for the future. Both ours and my wife’s three children. 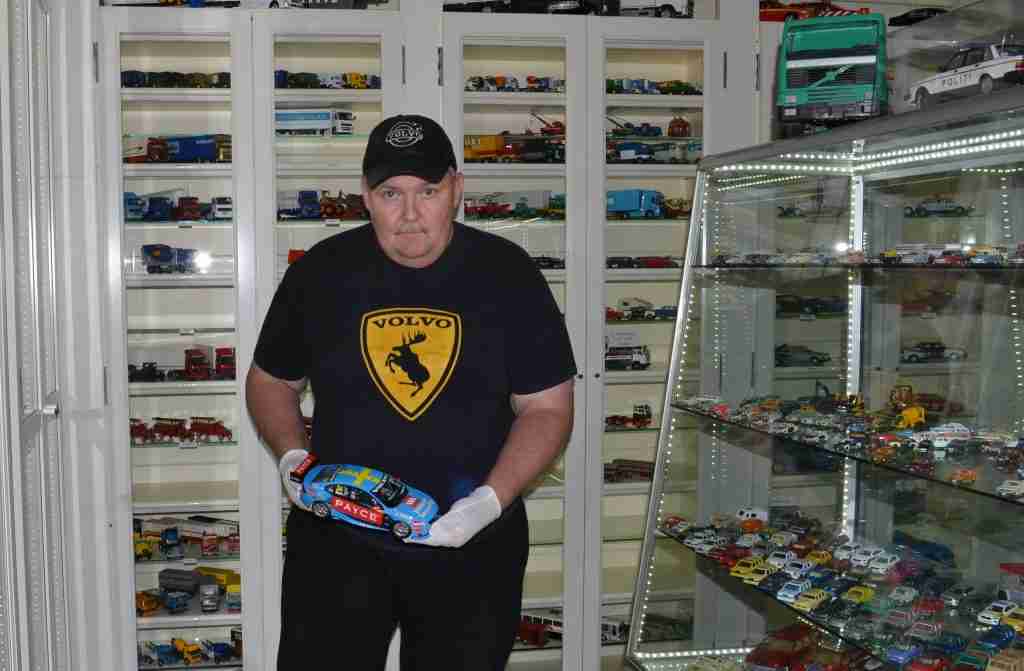 My family is happy that I have a hobby to spend my time on rather than getting gray hairs from sitting and watching television all day. Whether I collect stamps, books or something else, it does not matter, as long as I am happy and so are they.

He mentions both Brio and Tekno, two of my favorites! My horse cart is there now, but no Volvos! https://www.hobbydb.com/marketplaces/hobbydb/subjects/brio-brand