Thanks to our new upgrades and others arriving in the coming weeks, we’ll be able to show you exactly what you want to see when visiting the site.

That means making it easier to find items such as Autographs and Customs, while in turn decluttering variants and subvariants.

We have added a large number of Customs, Errors and Prototypes to hobbyDB, in addition to our recent venture into Autographed items. Plus lots more.

hobbyDB Squad Member Maelstrom, for example, has 10,000 Hot Wheels Errors to add to the database. We are also in discussion with a number of parties regarding thousands of Autographed items. And dozens of Customizers have asked for their work to be added to the site.

While that is great for fans of these items, it can sometimes make finding production models difficult. We knew that we needed to make some changes to accommodate all of this new data.

So instead of showing say 15 Variants on an item, we plan to show you the two models made by the Brand (say Hasbro or Matchbox) and then items that have either been autographed, are a prototype, an error or have been customized.

And if you prefer Autographs or Customs you will be able to set those as your Default.

You can find the first version of that already on the Site, here for example a Funko Pop! that now has its 10 Customs separated –

So far, we have done this for Customs, Errors and Prototypes.

For example, we have 5,666 Ford Hot Wheels in the database. But only 276 of them are separate products, the others are all Variants and the above (Autographed Items, Customs, Errors and Prototypes).

You will be able to toggle from the current view with those 5,666 Database Items to one that shows you only 276 Variant Groups. Here is an early Mockup of what that might look like while searching for the words “Dairy Delivery”  – 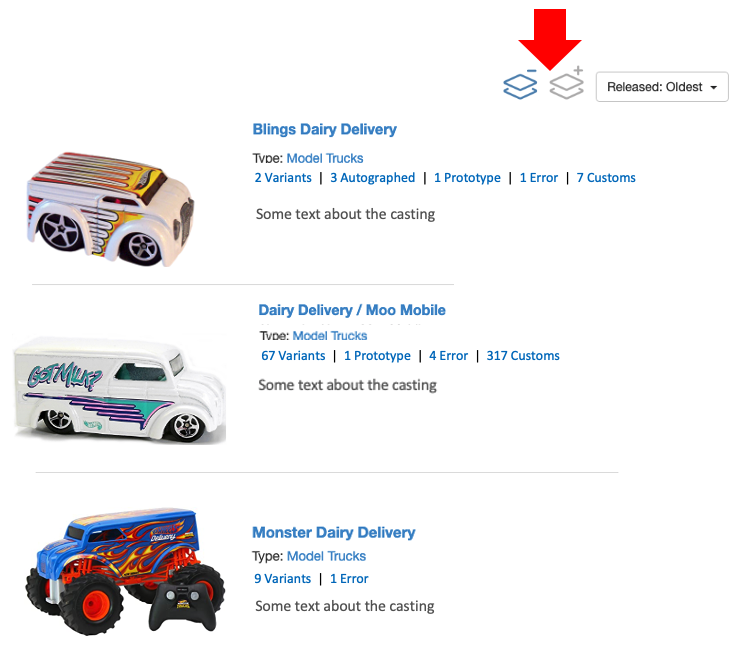 Let us know what you think! Comment below or message us at support@hobbydb.com with any questions, concerns or kudos!

Do I need to go back and repost my Convention items with signatures already listed some years ago under item name.?