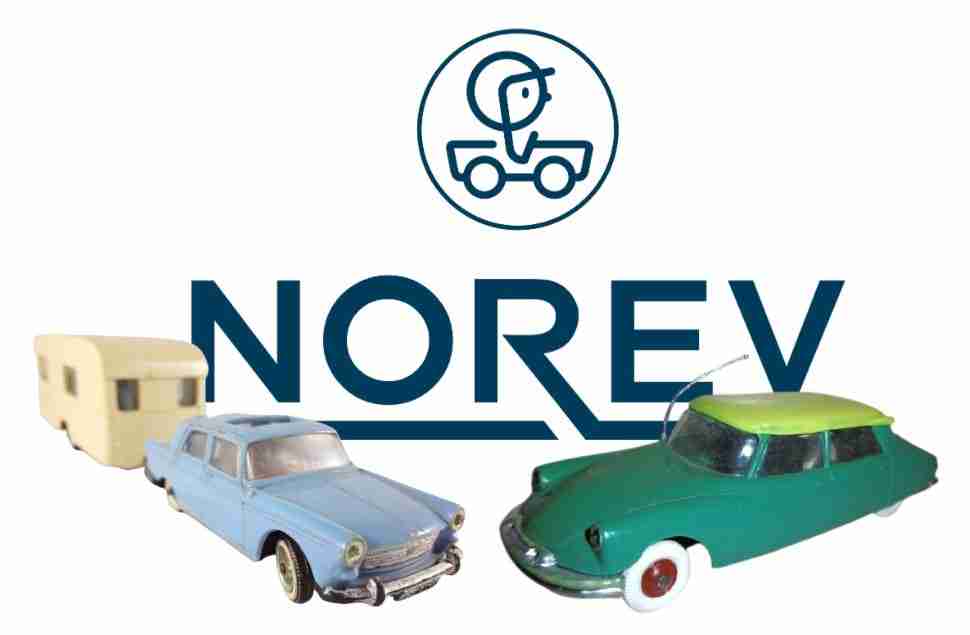 The Veron brothers founded Norev Diecast just outside of Lyon, France in 1946. In the 75 years since, Norev has grown among the godfathers of the French diecast industry.

hobbyDB is home to more than 3,700 Norev items, each one more valuable than the next in terms of money and sentimental worth. With that in mind, we’re taking a look at the most-valuable Norev models found on hobbyDB.

Remember, estimated values are always fluctuating, especially as we add more and more price points to ensure the accuracy of the hobbyDB database.

See the list of the most-valuable Norev diecast models currently on hobbyDB by following this link. 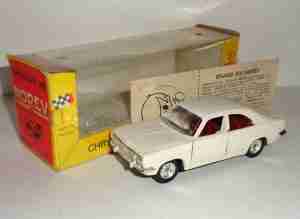 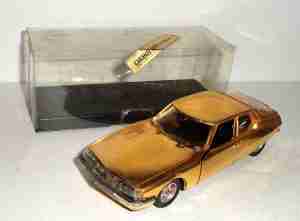 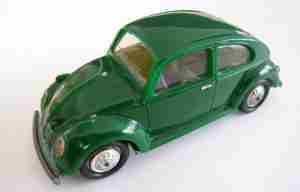 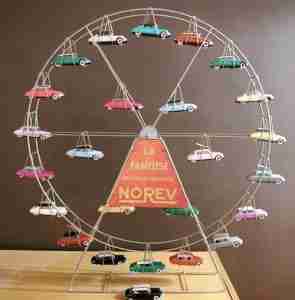 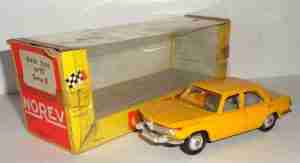 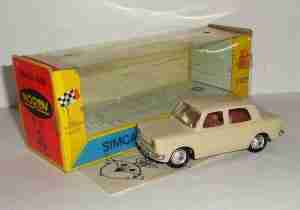 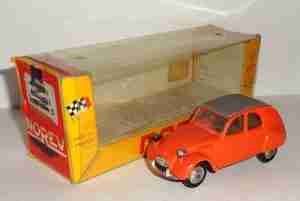 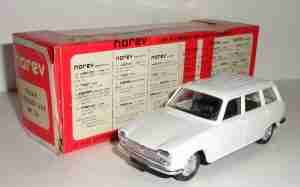 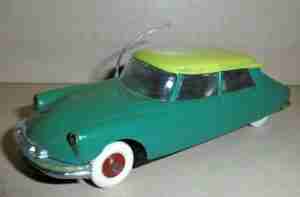 Are you an avid Norev or diecast collector? Share your passion and expertise with us by becoming a hobbyDB Squad member. Our team of volunteers adds items and prices, curates subjects and much more (here a special thanks for Baron von Zach who has worked hard on improving our Norev data over the last few weeks). If interested, message us at support@hobbyDB.com.

Those are some crazy prices with many, many bids each! You have to be a real Norev expert to tell if these are rare and original. Those white tires on the DS look too new, but what do I know!

I am still trying to convince the Baron to share some of his and other Norev Bananas with us… If you not yet in the know, Norev Plastic models can warp more than one would expect, more even than 1/24 Scale American promos!

My Norev Bananas are proudly paraded in my Showcase.
I’m not sure what to make of these prices, I’ve never seen anything like it. Ever. I have seen factory prototypes sell for less.
Fact is that I can get all these models at a fraction of the cost and they would never yield these results if I listed them for sale. Prices have been stable for a while and now actually go down a bit, because so many are currently on the market and the number of collectors is rather decreasing.
The gold plated (it’s real 24 kt) SM is rare indeed, so are the BMW 2000s, but the rest are actually quite common and I have examples of all of them in rarer colors. I bought my white Chrysler 180 earlier this year, for under ten Euros.
The shop display wheels are usually around 200 Euros and Norev recently made a batch of replicas.

All of these are based on actual transactions but as we just started adding Norev prices it might well be that it shows the outliers and more transactions will change their prices (Estimated Values are based on all Price Points for a Database Item but if there is only one that is the Estimated Value for now – more on them here https://help.hobbydb.com/support/solutions/articles/36000126828-what-is-the-estimated-value).

There were 20-30 bids on some of these Norevs so at least 2 people really wanted them. But that is really only one data point so if more of those colors sell then we will have a much better idea on the value forecast.

I had a look at the bid history and that clearly reveals that something fishy happened here.
It’s completely normal up to what would be expected, then suddenly a bid of 589 Euros, followed by a bid of 594 Euros. It’s the same for all the auctions of this particular seller, even the sums are the same.

That could easily happen once – 2 bidders with very high bids submitted. But is the same 2 bid amounts occurred in all the auctions from this one seller, than it is fishy! If these Norev’s reappear for sale in a few weeks, then we will know…

The green DS with white tires looks more normal – different values but 2 people put in very high auto-bids. All it takes is 2 crazy collectors at the same auction and bam! Price goes up!

That green/yellow DS is very unusual, so much so, that I have never seen one like it. So there I can understand the price. However, looking at the photos closely, I believe it’s a fake made from two models. Mine is very unusual too, genuine, and I have received offers in the neighbourhood of what its estimated value is here on the DB.

But the wares from the Portuguese seller weren’t that unusual and when you look at his own past auctions in his feedback history, nothing like this ever happened. Mind you, I don’t think he did anything wrong and I believe he is genuine.

I guess what happened is this – someone put in an extremely high bid to make sure he will win the auctions, assuming all other bidders will fall by the wayside eventually at a price where most collectors would get cold feet. His plan was then nixed by a last second sniper app and I bet there is a man out there somewhere now, who is not very happy with himself, having forgotten to set a max value.

I’m keeping a very close eye on future activities, trust me on that.

I agree, so it is not fishy in the sense of cheating, just poor bidding! Or real last-second bidding with 2 high rollers! All nice old Norevs, in any case! (unless one is restored…)

Well, I’m the last one who’d say if I haven’t seen it, it doesn’t exist.

All I am saying is that the green-yellow DS is extremely unusual and I would be careful shelling out that kind of dosh for it without having been able to inspect it closely beforehand, especially if the photos allow for even the faintest doubt. However, Nicolas Defrance is a well known individual with a large following in Norev Plastic hardcore fetishist circles and I trust him. But even he is not infallible.

There is a version in the same green, but with a grey roof. These are quite common and rarely break the 50 Dollar mark even in very good condition.
Any version with a coloured roof (as opposed to white, black, or grey) is unusual, however, there are also some very unusual versions, where the roof is in one of the mundane hues and the main body in something bonkers, like a beautiful chartreuse/black example that’s tempting me on eBay at the moment. I have seen fuchsia/aubergine ones a couple of times, which, until seeing the green/yellow one, I believed to be the most outlandish and rare combination. Generally the less garish versions command the higher prices, though.

Also note, that there are two distinct castings of the round headlight DS. The first one, #10, which was produced from 1956 to 1959, and the second one, #48, which was produced from 1960 to 1967. The latter initially had the “ashtrays” (grilles) as separate plated pieces in the front fenders, like the real cars did at the time. These were deleted after 1961, like they were on the real cars. Consequently they are the rarest of the bunch by default.

The latest sales of the Portuguese seller, who btw. has an impeccable track record, have gotten onto the radar of the French Norev forum (I didn’t do it!) and you can imagine that a fiery discussion ensued. I will form an educated opinion once the real experts have chimed in and report back.

There is another seller on eBay (vicswag2013suite) who occasionally offers highly unusual versions commanding hefty tariffs, and is often accused of forgery. I have known him for many years and his family and the Verons were neighbours, so he and his brother grew up playing with the Veron children. They were often given color and other test models that weren’t approved for production by Joseph Veron himself, sometimes by the crate load. They continued collecting as adults and as you can imagine have amassed an immense collection over the decades.

Wow – c’est fantastique! I would to visit the Veron’s neighbors!

I have tried that for years, but they are a bit reclusive, hence I also didn’t mention their names.

However, I was invited by the sadly late Marc Fischer, whose son owns the company nowadays, back in 1986, shortly after he became chairman of the company and planned to fundamentally modernise it. Not only did Mr Fischer, who was a total car guy and model collector if there ever was one, allow me to invade his home, he also showed me the “museum” (cough, cough) at the factory, constantly peppered me with questions and carefully listened to my answers in regard of a potential resuscitation of model car production, which had been stopped altogether in 1984, not 1985, as you can read elsewhere. The 1985 stuff was merely leftover stock.

I advised him that IMO all he would need to do is make them in authentic colours, from a non warping plastic, with better chrome plating and with prototypically correct wheels, so they would equally appeal to collectors hitherto avoiding Norevs because of their non authenticity despite the shapes and overall detailing was nothing to be ashamed of, and also to those, who already own the originals. I vociferously advised against just doing straight reissues, since I had a feeling that they would neither appeal to 1980s kids, nor adults.

Mr Fischer understood full well that anything made from the existing moulds could only be interesting for collectors, and that re-entering the toy market would only be possible once enough funds had accumulated to invest in new product lines.

Long story short, the ‘new’ post Plastic line of Norevs in the late 80s was made from an ABS plastic and had all the attributes I suggested to him.
The rest, as they say, is history.